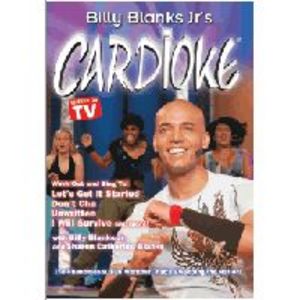 If you are like most people you don't have time or the drive to work out. It can be tedious, time consuming, repetitive, and boring. I cannot stress what a huge out of the box thinker Billy Blanks, Jr. is. Cardioyke is a revolutionary new approach to fitness. The workout is designed around a fun dance style that promotes cardio health and builds stamina. Billy intermixes fun songs that everyone is familiar with matched with changing segments that keep the workouts short and fun. I am always very skeptical when anyone says a workout is "fun", however this really delivers. Billy has modifications so that any fitness level can participate and increase the level of difficulty as you grow. The moves are very simple and easy to follow, yet challenging at the same time. It is a compact workout that you can complete in 30 minutes from warm up to cool down. Billy has you sing along for certain parts to help you build endurance. I have to say that while delivering a great all body workout, Billy has also taken a huge chunk of drudgery out of fitness and makes health much more achievable.

***Quick View:*** I discovered this workout as well as a couple of others from Billy Blanks, Jr. and bought them. I love Billy Blanks' Tae Bo and wanted to see what his son came up with. I also love dancing workouts. This one is a little corny and a little confusing but, in the end, it gets the job done of getting people up and moving, smiling, singing and burning calories. ***My Take on Billy Blanks Jr's Cardioke*** This workout is taught by Billy Blanks Jr. and his wife. Behind them are people of all ages and weights, clearly not professionals. They range in age from kids to seniors. I think some are the Blanks' family members. The idea behind this workout is not just to have fun and workout but to sing along. That isn't because singing is fun (although it is), it's because when we sing, we breathe and many people don't breathe right when working out and that hinders progress. The warm up is quiet and the crowd doesn't sing. Then when you get into the actual cardio, the words scroll across the screen and the entire group sings while exercising. It can get a little confusing when everyone is singing and Billy Blanks Jr. is talking over them with some instructions but usually he will show a move, practice it, add on to it, practice it and then get into the singing and cardio work. His wife looks a little like Michelle Obama and and smiles entirely too much and too widely to be exercising very hard. She annoyed me at first but I ended up liking her. You warm up to "Let's get it Started' then launch into cardio with "Don'cha" and "It's Your Thing". After that, we freestyle dance to "Dancing in the Streets". It's a weird little break where everyone just dances and they come up one at time to Billy Blanks, Jr. and dance with him for a while. I just do whatever I feel like doing or I can try to follow him on the screen. Back to actual group exercise, "The Cup of Life" is blah. It isn't a song I like but the dance steps are fun. Next is sculpting. You just stop the whole cardio thing and do sculpting exercises to "I Will Survive". And you sing of course.  Just as your heart rate is down, Billy Blanks, Jr. offers a stamina challenge to "Proud Mary." It starts out slow and builds to a crazy fast level. At that point, the cool down begins and Billy's wife sings a song she wrote called "Unwritten" which is about us all expecting too much from ourselves and putting ourselves down. It really got to me because I am very hard in myself and that song hit home in a big way. It's a beautiful way to end a workout session. The DVD has some extras like a two minute abs blaster section, ability to choose segments, and interviews. It's a 30 minutes workout that flies by. ***My Viewpoint*** People who are really serious exercisers won't like** Billy Blanks Jr's Cardioke**. It's just too lighthearted and freestyle for some. I wasn't sure what to think when I did it but I burned calories, sang (loudly), and had a good time even if it all as a bit corny. Billy Blanks, Jr. reminds me a teeeeeny bit of Richard Simmons mixed with a little Shaun T from Hip Hop Abs and, of course, some of his Dad, Tae Bo's Billy Blanks. He's very likable. ***4 stars.*** I have a new dance DVD from Billy Blanks, Jr. to try out and I'll report back! That one isn't a sing along but it looks like a lot of fun and if you don't have fun working out, it's a big ole bore.

I have to admit when I first saw the workout Cardioke I had to laugh.  It sounded kind of silly doing Kareoke while you work out.  But when I saw it on my on demand I decided to check it out.  I found myself really loving it.  Loving it so much that I actually bought the DVD.  Kardioke is instructed by Billy Blank's son Billy Blank's Jr. who sports a balled head just like his famous workout guru dad.  I just love dance workouts and this was is just so much fun.  You start out with a simple dance warm up, no singing in the first song unless you want to.  Then you do your first cardioke song.  You pretty much only sing the chorus though and to keep it from getting really confusing you do the same moves during the chorus each time.  Then you learn the Cardioke slide.  You actually sing what you are doing.  So you will be singing "Step together right, step to together right, walk it out."  Then after you get the Cardioke slide down then you perform it by going all out in the next song.  The workout starts out with a low intensity but then you gradually get higher in intensity as you go and there is one fairly high impact song that is a little more challenging.  Beginners can always skip that part.  The music is lots of fun and it is fun to enjoy singing and dancing at the same time.  At the end of the work out you are lead through a nice song written by Billy Blanks Jrs. Wife and performed by a member of his dancing cast.  The song is called You Are Enough and is very inspirational and very catchy.  The music includes: Let's Get It Started It's Your Thing Let's Get it Started Don't Cha Dancing in the street The Cup of Life I Will Survive Proud Mary You are Enough This is the most fun I have had out of all my recent fitness DVD purchases and I have bought about 15 in the last couple of months.  You will also get a good workout, but it won't feel like a workout because you are having so much fun.  The workout is nice and long so you will burn lots of calories and time will go by really fast.  You will sweat, but you won't mind.