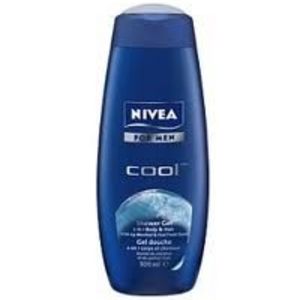 Product keeps my skin clean, mostly clear, and for the most part, soft. It isn't the greatest product in the world in terms of body wash, but it is worth the price. The scent of the product is sub-par, it doesn't smell bad but it smells similar to a cheap cologne. The best part of this product is this price! It's 3.99 for a big bottle and can be used for hair and body. I'm a college kid and this keeps my budget down low, soap can get expensive but this certainly does the job for a good price.

Let me say first that I LOVE this product. Its my husband's bodywash, but he hopefully doesn't mind that I use it. Nivea for Men Cool Bodywash with Menthol is delicious, and envirgorating after a hard day, or for those needing a good start to the morning. I've stopped using my bodywash, and simply use this. Each shower is truly an experience, and I love, love, the smell of the steam right after I open the shower door. To get this lush of a feel in a woman's bodywash would generally cost a lot more, and I can get that feel for a lot less with this men's Nivea. This aids with my dry skin, so the menthol is not drying. It says it can be used as a shampoo, but I wouldn't recommend it for that. It left my hair a bit hard. My skin though is clean, radiant, clear, and I feel great with each use. This bodywash doesn't have too much menthol, but it has a little more than other varities. So, women, don't hesitate to use this product. It has a great scent, and makes me feel GREAT.

My wife got me some Nivea for Men--Cool recently because it was on sale.  Prior to this we looked at Nivea for Men but it's a little pricey for the amount that I use.  So we have always opted for a cheaper brand.  I was excited to try it though because Nivea is a reputable company.  I like this product but I think the smell is a little too overpowering.  It's a nice smell, but too strong for my liking.  I like the fact that it does not dry out my skin because especially in the wintertime my skin is very dry.  I wish it had more moisturizing ability though, that would make it more appealing to me.  I want to try maybe a different kind/smell to see if I would like it better but we will more than likely wait for another sale.  Nivea has quality products but the Nivea for Men Cool is not one of my favorites.  It would not be my first recommendation for other men, I would say to spend less money.

My son is at an age where showering is NOT his favorite thing.  I thought that perhaps getting him "grown up" body wash might help my plight.  It certainly did. Nivea is gentle on his sensitive skin while getting him clean and smelling great.  The scent is not over powering but rather fresh and clean and it has some staying power as well.  It lathers up very well and washes off clean.  How do I know this?  I have used it myself when I want the wake up of menthol on mornings I just can't get myself awake.  It is moderately priced but since a little goes a long way, that ups the value in my eyes.  Coupons for this product are also easily found as well as sales to make it very inexpensive to stock up on. There is one area I was not impressed. It is advertised for hair and body.  Perhaps if there is minimal hair involved it would work fine but with longer hair it just doesn't do the job.  For long and thick hair it really doesn't get it clean. Over all, as a body wash it's a great product, smells wonderful, and is gentle on the skin.  Use separate shampoo and you should fine it to your liking.

Body wash has been around for several years and in my home, it is now the only soap we use in the shower, completely replacing ordinary bar soap. I transitioned a little reluctantly at first and one of the main reasons for my apprehension was the fruity and floral scents so common among body wash products. It took some trial and error until I found some that I like and one of them is **Nivea for Men Cool Hair and Body Wash. ****Body**** Wash Commentary:**Nivea for Men Cool Hair and Body Wash is blue- colored body wash, medium in consistency, with a pleasant cologne- like scent. The body wash contains menthol for added scent and special ingredients that prevent drying of the skin. It can also be used to wash the hair, and only a small amount is needed to work up a good lather. Nivea for Men Cool Hair and Body Wash is a nice body wash product formulated with men in mind and it ranks among a handful of body washes I find acceptable for regular use. One of the best qualities of this product is its scent. Not only is the scent the antithesis of the fruity/floral body washes, it is also more subtle. Nivea for Men Cool Hair and Body Wash certainly smells clean and masculine, but the smell isn't as overbearing as it is with certain other body washes. Some body wash products are almost as strong as cologne in scent and the smell sticks with you for several hours after exiting the shower. This Nivea product is just right in the scent department.  Besides the pleasant scent, other positive qualities with this Nivea product are its ability to clean and leave your skin feeling cool. With added menthol, your skin is left with a cool, clean feeling. It isn't cold, mind you- just cool. And for cleaning, this product is very good. It doesn't lather up excessively and rinses off quickly, helping you complete your morning routine in a short time so you can go about your busy day.One unique quality of Nivea for Men Cool Hair and Body Wash is that it can be used for washing your hair. It is nice to have this option available, but I have found that its performance on the hair is only mediocre. It is good when you're in a pinch and are running low on shampoo, but its sub- par performance in hair washing makes it less effective for this purpose. I gave it a few tries, but I found that my hair looked a little flattened- down after it dried, convincing me to stick with this product solely as a body wash and nothing else.   **Bottom- Line Viewpoint:** Nivea for Men Cool Hair and Body Wash is a very good product with much to offer. It is a little more expensive than most other body wash and therefore may not fit within many budgets, but it does have many positive qualities that make it a body wash product worth trying.

Brrr....so fresh and so clean. My husband loves Nivea Cool, but he doesn't know that I love it more than he does. I use 'his' bodywash, whenever I need to 'wake up' my senses early in the morning. The cooling menthol combined with a slightly cold shower is a shock to the senses, and a jolt to my skin. I feel like a member of the polar bear club when this combines with nearly icy water some early mornings. Nivea cool has the right amount of menthol, not too little to leave me wanting more, and not too much to have my eyes watering. The smell after opening the shower door is extremely intoxicating, and only wants me to go back in. Nivea cool isn't just a bodywash, it provides an experience for me that is unmatched. The soap lather is great, and doesn't interfere with dry skin. Menthol can be drying, but the type used in this product, only cool the skin, and doesn't make my skin tight or dry. Nivea cool is one of the most interesting bodywashes on the market, primarily for how it makes you FEEL.

I have sensitive skin that dries out very easily.  As a result, I generally cannot use soap or body wash with any scent unless I want to smell like a spring lilly or like a nursing home.  Nivea has changed that.  I initially discovered Nivea for Men Sensitive and was pleased to find it had a nice scent and didn't smell like an 80 year old woman's makeup. As a result I also looked into Nivea for Men Cool and the other body washes.  They are all great fior my skin and don't dry it out.  I highly reccomend this product.

Because of my dry skin, brought on in part by my diabetes my wife recently suggested that I try liquid gel soap because it is not as harsh on the skin as bar soap, even those infused with lotion and such.  So I took her advice and purchased *Irish Spring **Body Wash with Aloe.  * But, I also purchased ***Nivea For Men Cool Body Wash*** as well, and I have to say I like it.     Not only does ***Nivea For Men Cool Body Wash***-made with icy menthol-smell good and lather up richly, but it also washes away cleanly leaving my skin looking natural and feeling clean and smooth.  However, although the marketing literature claims the soap contains *"HydroBeads that instantly dissolve on your skin as you shower"* thus helping your skin retain your skins natural moisture, there is a noticeable dryness on my skin after use. Is it refreshing and invigorating?  Not really, but then again I do not look for that sort of stimulation in my body wash I just want it to clean and perhaps moisturize a tad.  I will keep ***Nivea For Men Cool Body Wash*** on my list.    **Ingredients: W**ater, Cocamidopropyl Betaine, Sodium Laureth Sulfate, PEG-7 Glyceryl Cocoate, Fragrance, Menthol, Alcohol Denat., Glycol Distearate, PEG-40 Hydrogenated Castor Oil, Polyquaternium-7, Glycerin, Laureth-4, PEG-200 Hydrogenated Glyceryl Palmate, Citric Acid, Sodium Chloride, Sodium Benzoate, Sodium Salicylate, Blue 1.