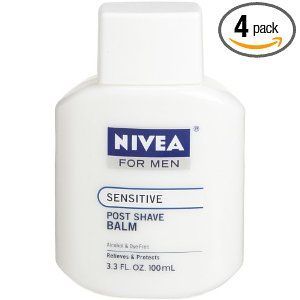 This has become a favorite not only for me but for my husband as well. For my husband, he has normal skin and he observed that after using this product, his skin feels smooth and not irritated after he shaves. this is a great primer because it makes your skin slightly tacky so the foundation sticks better. This is because of the glycerin and glycerin is sticky, It has a wonderful scent and it's great for sensitive skin because I use it for priming my skin before applying makeup! My skin type is sensitive and it has never broken out with this product. It's a win win for me and my hubby The only thing he didn't like which he wasn't sure if it was the moisturizer or just the weather was his face did break out at first but hasn't experience it again.

I have relatively sensitive skin and a tough, though not particularly heavy beard. Back in my corporate days of course I shaved every morning and if I had a client engagement in the evening I might shave again before leaving my office. Back then I always shaved with a blade. If my skin felt a little irritated a splash of Witch Hazel would quell the irritation without leaving a scent. These days, in my post corporate life, I typically shave every other day and occasionally will go three days between shaves. I alternate between a blade and a Norelco Senseo 3D Razor. Either way my skin often feels a bit raw after a shave. A friend of mine involved with advertising the Nivea brand of Beiersdorf always has a houseful of Nivea products. That's how I discovered Nivea for Men Products and their Post Shave Balm in particular. The balm comes packaged in 100 ml. bottles and has a fast absorbing formula that includes Chamomile, Vitamin E, and Provitamin B5. The consistency is somewhat lighter than a description of a "balm" would have you imagine, but the formulation is cooling and soothing. The scent is subtle and pleasant and rapidly dissipates once it's absorbed into your skin. **Some Final Thoughts** Those who read me regularly know that I don't part with money any too quickly, and Nivea for Men Post Shave Balm is a bit on the pricey side. But this is one of those products I'm willing to indulge myself with. I recommend it.

I absolutely love Nivea for Men Post Shave Balm. I switch back and forth between an electric razor and a traditional razor. No matter what I put on my face beforehand, my face feels the shave afterwards. I wouldn't say that I have an overly sensitive face. It doesn't look like I just shaved (except for no facial hair). I don't get red bumps or razor burn or anything. It just hurts afterwards. I started using Niea Post Shave Balm a few years ago and it cools my face right down. I can't even describe it. It is thinner than a lotion but thicker than aftershave. It goes on smoothly but rubs in easily. It doesn't add to the burn like traditional after shaves do. Also, unlike traditional aftershaves, this has a very subtle scent so I don't smell like a 1970s floozy. It comes in a very nondescript bottle which I think is genius. It has a subtle calling, that when answered, makes for a very comfortable shaving experience.

Getting into shaving with a Double Edge razor, having a good aftershave is an essential. When learning how to shave all over again, having a remedy for your mistakes is only a bottle away. Nivea's Sensitive post shave balm provides a regenerating mix of ingredients, that help sooth and cool skin, aiding in the healing of any razor burn you might encounter. When your shaving technique improves, it acts as a greaseless moisturizer and a great part of a grooming regimen. I really like that this product has minimal scent, so it works well with instead of against my cologne. Having a product come in a glass bottle is also a nice touch for your bathroom counter. It reminds me of a quality in products that has all but faded from existence. If you are searching for an affordable remedy to those bad shaves, check it out. The German's who make NIvea know a thing or two about bringing comfort to our daily ritual.

I have been using Nivea for Men Sensitive Post Shave Balm for at least five years now. Prior to that time, I would pick an aftershave lotion based on whatever was cheapest. Once I found this Nivea product, it became clear that paying a little bit extra was worth every penny. My beard is very thick so, therefore, I need to shave on a daily basis. As a result, I was often finding myself with dry and irritated skin on my face due to the daily shave. Nivea Post Shave Balm has provided me with daily relief from these conditions as I have not experienced anything of the sort since I began using this product. It quickly soothes and moisturizes my skin and creates a strong protection against razor burn. During the times when I do not shave on a dialy basis, I continue to use this product on a daily basis as a facial moisturizer. Even when I have a full beard, this product works wonders for the occasional itch and discomfort that comes with growing facial hair.

As a guy who hates (a) looking scruffy and (b) suffers from extremely dry facial skin, I am always on the lookout for well-performing men's grooming products which leave my skin feeling clean and smelling good. Sometimes, of course, I go for products which are advertised on television or print media, but every once in a while if I get free samples along with my Sunday paper and I like them after trying them out, I will buy the new stuff, too. That was the case with most of my Nivea for Men products some 10 years ago: I found a two-pouch sample package which contained Nivea for Men Face Wash *and *Nivea for Men Post Shave Balm. At the time, my face would get all blotchy, red and flaky whenever I shaved, especially in the cool dry season that passes for winter in South Florida.  In some ways, it was - as another reviewer here has noted - as if I had dandruff on my face.   Not only did this look bad, but it also felt awful; I was constantly scratching my chin, cheeks and jawline to relieve the itching.  Sometimes this worked, but more often than not it just made matters worse. To make a long story short, I tried the two Nivea for Men products on that same Sunday morning when I received the sample packets: I washed my face with the Face Wash before shaving and used the Post Shave Balm when I finished using my Atra razor on my beard.   **Nivea for Men Post Shave Balm** *This light, fast absorbing balm contains refreshing Menthol and Vitamins to help cool and soothe skin after shaving. It relieves razor burn and noticeably improves the condition of your skin.  - from the Nivea for Men web site* This product comes (usually) in white-and-blue 3.3 fl. oz. (100 mL) bottles, and like many skin care creams and lotions, it varies depending on skin types.  (For instance, the bottle for sensitive skin has a white cap that distinguishes it from its "normal skin" cousin **Nivea for Men Post Shave Balm.** **How to Use:** Using this product is very simple: after shaving, you dab "a liberal amount" (as Nivea for Men's web site puts it) onto your face and neck and rub it gently until your skin absorbs it.  On your hands, the balm will feel a bit watery or thin, but once it's on your affected areas you'll feel your skin cooling and feeling refreshed. In a few minutes after application, the balm *will *reduce your skin's redness and your face and neck will recover from the razor burn fairly rapidly. If you don't like overly-fragrant lotions, the Nivea for Men Post Shave Balm has a light, non-perfumed scent that is barely noticeable once your skin absorbs it. Of course, Nivea for Men products are somewhat more expensive than other brands (it is an import from Germany, after all), so the Post Shave Balm is pricey.  However, given the fact that it does its intended job well, it's definitely worth buying.

I have been shaving more or less very day for only 5 years, most of them using any of the famous razors such as the mach 3, gillette fusion or any of the cheap ones they sell in stores. In all that time, I have rarely used any beard prep or aftershave. My face is quite sensitive, so the fact that this can help me after shaves is awesoem because i hate an irritated face. After only a few days of regular use, balm was working perfectly making my face smooth and feel good after the shaving process. the product is a little small so its best not to use a lot of it because otherwise you will be buying more again and the price of this is average to expensive. Since finding this product, I have tried a few other brands for comparison, but have always returned to the Nivea. Smells great, does what it says (soothes and replenishes), and to be fair even though i compalined about the price, the other options were not better.

I have used a gazillion aftershaves (ok, not a gazillion, but a lot). Nivea post shave balm is by a mile the best aftershave I've ever used. I have a distinct habit of shaving against the grain of hair growth on my face. This can lead to redness and bumps on my neck. This occurred with me for over 10 years. To remedy the situation I had switched from an alcohol-based aftershave to Nivea post shave balm. The difference in my skin was felt immediately. My skin actually felt soft. I have rosacea so for me that is a big deal. I've recently thought about putting a smidge on just above my eyebrows to see if it would lessen the redness there. The Nivea balm is smooth and creamy. It's almost a complete liquid. It has no burning or stinging side effects as almost every other aftershave on the market has. This balm smoothes my skin within a matter of seconds. I would highly recommend Nivea Post Shave Balm.