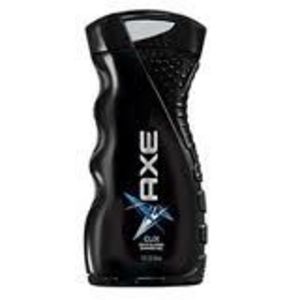 My boyfriend uses this product and I love how it smells, no matter what scent he uses. We also use it to wash the dog...out of everything he has used in the past he said it is the only product that doesn't irritate her skin. Plus, there are always coupons for Axe, sometimes as much as a dollar off. Also, the Target Cartwheel App will sometimes feature Axe with anywhere from a 5% to 10% discount...and that plus a coupon makes the product inexpensive. I buy shower gel everytime I have a coupon and stock up, so he has a drawer full of Axe shower gel. Makes great Christmas gifts too...there is always AXE gift packages....Body and Bath Works for men. Reasonable price, great smell, many scents to choose from, and doesn't irritate the skin.

I've tried many products and nothing works as good as AXE, it smells better and last longer than any other body wash. I highly recommend this product and will continue to use it and other AXE products. Don't waste your time with anything else, trust me it is not as good as axe.

I have used Axe deodorant and body spray for years now and I have always liked the smell of their products and how it lasted me the whole day. I decided to give their shower gel a shot. Before this I used soap which always left my skin feeling dry afterwards. I am so happy I switched to Axe Shower Gel! It doesn't leave my skin feeling dry and tight like my soap did. It also smells really good and makes you smell fresh and clean for hours. I was always nervous about using shower gel because I heard it left your skin sticky but I've had no problems at all with Axe shower gel. As with all Axe products their packaging is pretty neat. There's some awesome hand grips on the side so the bottle does not slip when your hands are wet and soapy. I also like that the smell is strong but not overpowering because I hate smelling like I poured an entire bottle of cologne on me but I still want to smell noticeably different. Axe does a good job of creating that balanced scent that makes me feel confident but not too overbearing.

I don't mind using what's ever in the shower to get clean as long as it doesn't smell like a girl! Lately my wife has been getting less neutral smells and more flower or fruity stuff! Sometimes a guy just wants to smell like a man. I am glad I went out with my daughter one day and she showed me Axe shower gel. She told me her husband uses it and he loves it. It smells manly she told me with a smile, she knows what her mom puts me through!LOL! She even had a coupon and it was on sale..all my favorite things..guy or not I do love coupons and saving. Axe really smels great she told me and has tons of great scents to choose from as well as other products that I can try like deodorant. I must admit I do get alot of complements when I use the Axe shower gel..my wife thought i got myself a new cologne at first! Take it from me men..the ladies in your life will notice the great new way you smell!

Ever since the scented shower gel battle began between Old Spice and Axe, I have not really used either one. That remained true until I received a bottle of Phoenix Axe shower gel last week. And I am here to tell you that I believe that Axe is by far the best shower gel product out there to date. Usually shower gels leave a nasty and sticky residue on your body once you get out of the shower but Axe, as far as I can tell, does not do that whatsoever. Also, the Phoenix scent given off by Phoenix Axe Shower Gel smells amazing and manly at the same time. And best of all, the awesome smell stays on your body for days. Yes I mean that, *DAYS* at a time you will still have the same great smell. I know I certainly have gotten tons of compliments ever since I have started using Axe Shower Gel and I bet you would too. When it all comes down to it, there is absolutely nothing Old Spice can do to catch up to Axe's insurmountable lead in the shower gel race.

The first time I smelled AXE I was immediately drawn to it. I know AXE commercials promote "Chicks dig it" but they must have pumped liquid "attraction" in it! I do know that they high amount of pheromone makes a woman melt but it wasn't until my husband used it after being away a while that I realized how amazing it is. I have always prefered a pricey cologn to a body spray, but the body wash with the spray and the rest of the line for that matter keeps my husband happy and me happier! The biggest pro regarding AXE Shower Gel is that my husband has sensitive skin, mostly when it comes to soaps and lotions but it can be a nightmare for him if he uses a product that doesn't agree with him (hives, itching, etc). AXE is one of the few products designed specifically for men that he not only loves, but he doesn't have an adverse reaction to. My favorite fragrances are "Touch" and "Phoenix" and they had a limited edition that I don't remember, but I wish they would bring it back as it was the BEST! As with all of my favorites about products, AXE almost always has coupons and most drugstores have sales every 2-3 months which means a very good price to top off the yummy smell!

I had used several Axe products before, starting with the standard axe deodorant and then landed up trying the Axe shampoo, which was pretty awesome, since i had two really good experiences with these products i decided to move away from my regular shower gel and go in for the axe revitalizing shower gel, Its cost was pretty much at the same level as most premium brand shower gels, it had a nice looking shape, and the smell was definitely good, so having purchased it i decided to use it as soon as i got home, which i did. It not only worked real well as a shower gel, it had a nice tingly but not overtly strong effect on my skin. Its smell was unlike the generic fruity smell, its had a nice spicy musky fragrance that i think really made the difference as  a shower gel.  The nice thing about this shower gel, unlike most others are, that the fragrance actually stays on you for a long time,  and no, you  dont have girls running after you like in the tv commercials,  but you definitely do feel alot more fresh. I would definitely be buying a whole lot more of these shower gels in the future.