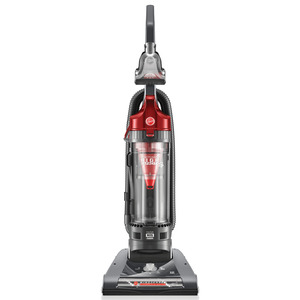 I've owned several other brands of vacuums in the past, but this one has impressed me the most thus far. Perhaps it's because I can watch the mounds of dust collecting in the bagless canister, or perhaps it's that vacuuming my mostly-carpet apartment seems like less of a chore than it used to... Maneuverability The first time I used this upright vacuum, I did have to struggle a little to push it on my mid-pile carpet. The subsequent times seemed easier, though I still work up a sweat! It comes with attachments for cleaning in the hard-to-reach spots, such as corners where the vacuum doesn't fit, underneath beds and sofas, as well as behind furniture. I suppose the hose could be used for dusting in higher spots, such as on top of ceiling fans, though I haven't attempted this. Ease of Maintenance Emptying out the bagless dust canister is as easy as flipping a few latches and turning the canister over your trash can. Once you get to the point where you clean and rinse off the filter, and then wait for 24 hours for it to dry fully, that might be a little more annoying. However, most, if not all, vacuums will require that step anyway. Suction Performance I was shocked by how much dust the vacuum picked up the very first time I vacuumed. I had just moved into a new apartment, and the carpet had been cleaned prior to my arrival. I could see the huge clump of dust in the canister -- good for noting that the vacuum was doing its job, but kind of icky to look at if you don't want to empty out the canister after every vacuuming. Versatility With the hose attachments and the settings for low- to high-pile carpet, the vacuum has a range of versatility. Design No complaints. The vacuum is not terribly heavy, and the canister is easy to remove for cleaning. Occasionally, I do knock over the hose attachment that goes on the side, but that can be removed while you're vacuuming anyway. I wish the power button were designed as a pedal or step-button to be pushed with one's foot rather than a small red button about mid-way up the unit, where you have to stoop to turn the vacuum on and off. Durability I have only had this vacuum for two months, so I can't comment on its durability. It has held up fine thus far, and I expect to use it for a few more years.

We just bought this vacuum a few weeks ago and have been impressed so far. The vacuum has excellent suction, picks up lots of dirt. It is easy to empty the canister and it has a washable filter. Negatives are how heavy it is and the turning radius, and the height adjust is manual, not automatic. Cord length and hose length are pretty standard. It is relatively easy to pull the hose out and use it. It has adjustable height for different surfaces and carpet styles and does well over all the surfaces in our house. Overall it seems like a great vacuum. Time will tell how well it holds up. Ease of Maintenance Easy-to-empty canister and washable filter. Design Only negative is the weight and manual floor level adjuster that is on the base of the unit. Also has a manual switch to turn it on or off. Some may prefer the foot pedal seen in other vacuum designs. Durability We have only had it for a few weeks so it's hard to say how durable/reliable it will be.

I wanted a bagged machine because I think this is a cleaner way to go. I do not want dust and dirt in my face when it is time to empty and I do not want a dirt film left in my machine. I also needed a machine that will pick up pet hair and this machine answers that need very well. Maneuverability This machine is easy to move around -not too heavy. Ease of Maintenance As long as I have had my vacuum, I had had no need for maintenance expect to change the bag. Suction Performance This suction is great. I need something for pet hair and this works very well. Plus, you can stop the beater bar when you are on tile or laminate and stop dirt from flying around so you can suction it up. Versatility The tools are good but the hose does not have as much give as I would like. Maybe it will loosen up in time. I have no stairs so no comment here Design Everything is in a convenient place and the bag is easy to remove and replace. It also has an indicator to let you know when the bag needs to be changed. I use the Hepa version bags available to provide more filtration. Durability So far so good-4 months and counting

This vacuum has been just okay for our family. It was purchased about 5 years ago and so far, we have had the belt break at least 3 times and we had to have it in once for service because the on-off switch wouldn't work right (according to the repair guy, that is a common occurence with these vacuums). It performs fairly well, but with a bagged vacuum, you have to remember to check the bag fullness pretty frequently or it will easily loose suction power. some of the design feels "cheap." The attachment comparment door falls off easily and the cord is always in the way. I would recommend doing a bit more research before considering this vacuum.

I bought this Hoover Wind Tunnel Vacuum several months ago when my previous vacuum went out on us.  I had a Hoover before, but it was self-propelled and very heavy.  This time I was looking for something much lighter weight but that would still have good suction.  I looked at several different types and brands in the store, and this is the one the salesman recommended.  That surprised me as this was one of the least expensive models that he had.  Like I said, I've only had it a few months, so I don't know anything about its longevity.  But I have been pleased with how it works so far.  We have two cats, so trying to keep things hair-free is a challenge.  I think this vacuum does pretty well for us.  I especially like the attachment with the beater for cleaning furniture.  Most of my carpets are fairly low weave, I don't know how it would do with a high nap carpet.  I've never had a bagless so I don't know how they compare.