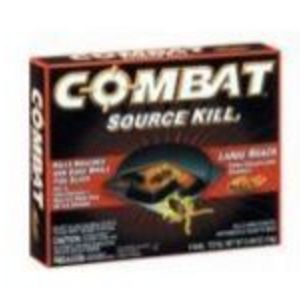 Insects are a problem for many households. Left uncontrolled, an insect problem can multiply rapidly and quickly overcome ordinary means for control. Thus, it is imperative that the insects be brought to their death as quickly as possible and one product that helps achieve this outcome is **Combat Source Kill Formula for Large Roaches**, a bug bait that kills roaches at the source**.**** **    **Bug Killer Commentary:**   Combat Source Kill Formula for Large Roaches is a bug killer consisting of small, plastic roach bait containers that attract roaches with a special insecticide formula. These plastic traps are situated on a square base measuring about three inches on a side, making them compact enough that they can fit into small spaces where bugs like to hide. Four entrances on each bait trap lure roaches into the interior where the insecticide awaits them. This insecticide uses the active ingredient hydramethylon to kill roaches in a short time, but not immediately. Roaches take the bait back to the nest where they share it with other roaches. This kills the roaches and wipes out the members of the nest.    I have used many different bug killers in my day, but rarely have I had to deal with an insect that was larger than a few millimeters in length. In the past, ants had been my only real problem, but once I moved to Texas, I had the pleasure of encountering a huge beast of an insect known as a palmetto bug. These large bugs are a member of the roach family and they are a scary sight to those who encounter them for the first time. Not only are they are large in size (can grow up to two inches in length), but they also have wings and will fly directly toward your face and body if they feel threatened. They will scamper for cover as long as they can find a quick place to crawl and hide. But if no quick exit exists, they will spread their wings and fly right toward you- a shocking occurance for the uninitiated. Palmetto bugs like to stay in dark places and when I first moved into my Texas residence, I would often see them in my garage at night. They race for cover when the lights are turned on and they will take cover in any dark, hidden place they can find. Sometimes, they get into the house and this is why I was convinced I had to take action quickly. Breaking the plastic baits apart, I placed them in the garage and waited for results. As a test, I made sure to open the door during the evenings to see if I could spot a palmetto bug. The numbers slowly declined each day. Even if I went over to a favorite palmetto bug hideout, like a box, the dog's crate, or other object, and I lifted it from its resting place, there were no palmetto bugs to be found, or perhaps one at most. Combat Source Kill Formula for Large Roaches wiped out the critters and returned my garage to its former self.    One thing that concerned me with Combat Source Kill Formula for Large Roaches is the size of the openings in each trap. They are smaller than I had hoped, in spite of the fact that the baits are labeled as "large roach" size. The problem with palmetto bugs is that some are so big, it is doubtful they can fit into these openings. One has to hope that the smaller palmetto bugs will take the bait back to the nest and share it with their monster- size brothers, sisters, and cousins. From my experience, this seems to be what has happened. **Bottom Line Viewpoint:** Palmetto bugs aren't a threat, but their large size makes them the type of insect that seems scarier than reality dictates and necessitates quick action. Combat Source Kill Formula for Large Roaches is an effective way to fight back against these large brown insects and their related kin. There are plenty of ways to fight back against insects, but Combat Source Kill Formula for Large Roaches presents an alternative that is cleaner and safer than others: No smell, no mess, and they solve the problem in relatively short time.

I love nature and little creatures as long as they stay outside in nature and don't invade my home where we live and play. I had had experience over the years with ants but when we moved to Texas I met another arm called Palmetto bugs. Palmetto bugs I have learned are a member of the roach family and these roaches aren't welcome in my home. I've tried many green and preventative approaches to dealing with these pests but some times you just have to pull out the big guns. That's when **Combat Source Kill Formula for Large Roaches** came in. It's sad but true, I went for the big guns, telling my husband I don't care if it is my natural remedy for getting rid of these things or chemical just get them out of our garage and definitely out of the house as they would try to slip in here and there whenever a door opened.  **Combat Source Kill Formula for Large Roaches** went to work immediately.  And within just a few days I didn't see them in the garage or even outside.  Whatever is in that stuff works and that's all I need to know. It's true the grow things bigger here in Texas and those bugs are the biggest I've ever seen.  ****