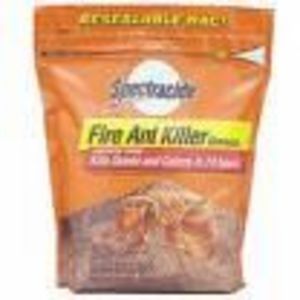 It took two applications over two weeks to stop seeing ants where I applied it. They just seemed to keep tunneling through the Spectracide to get up top and within a week, there were new mounds within three feet. Then, after about two weeks, the ants came back to the same mounds.

Absolutly eliminates ants and their mounds period.  I have used this products since it's market debut and I refuse to remove it from my Integraded Pest Management plan.  It works quickly and completely and I have been truly satisfied by it's effectiveness.

I tried Spectricide-and a few other expensive Ant killers.After reading the instructions and ingredients and the methods of application I stopped using poisions and harmful polluting chemicals.I live near a river on a canal where there is abundant wildlife.Being an environmentalist and conservationist I have vowed to return to othermeans of treating fire ant mounds.Just plain old VINEGAR ! It works ! you can use it full strength or dilute it.Just be aware that it can kill plants. I use it to kill poision Ivy.I also use vinegar to get those pesky returning weeds in the concrete sidewalksand driveway.Try it-it cost less and is not harmful or polluting to the environment.

Spectracide Fire Ant Killer Pesticide has been a real godsend to me and my family because now our backyard is once again our own.  Before we used this product, my children would come in crying with multiple ant bites on their feet and legs simply from walking on the lawn.  No way were they able to play ball, tag, or even enjoy blowing bubbles without being dressed for combat.  Pool parties were out of the question, (no bare feet allowed).  Play time at our house was a no-no. Since applying this product according to directions, we have become the most fun backyard on the block!  I will always keep Spectracide Fire Ant Killer Pesticide on hand and am so very grateful to the manufactures for giving me my backyard back to my family.

I love to walk around in bare feet.  Inside or out, when I'm around the house I am usually shoeless.  If necessary, maybe I'll put on a pair of Crocs.  So, what's the  problem?  Fire Ants! Years ago when visiting my parents down here in Florida, my mother always yelled at me (can you imagine?) about walking around without shoes.  "You want to be bitten by fire ants?" she'd yell.  My dad of course would just look at me and shrug.  She made it sound like a bogeyman story from my childhood.  So of course I ignored her and apparently the fire ants ignored me. **My Introduction to Fire Ants** A couple of years ago while pruning back some palms, I suddenly felt like my right leg was on fire, literally on fire.  I looked down and there they were, hundreds of them were on my leg.  I had stepped right on a small, somewhat concealed mound of these ants from hell.  I quickly brushed the off and then hosed down my leg, but the damage was done.  My leg was on fire and swelling. A trip to the nearby emergency room and a shot of steroids quickly put an end to the agony, but I was now a man on a mission. **My Revenge** I picked up a bag of **Spectracide Fire Ant Killer Granules Mound Destroyer** from the local Home Depot.  Following the instructions was easy. I sprinkled about a half cup of granules over and two feet around each mound then gently watered them in using a sprinkler pail.  I was amazed at how many mounds there actually were.  I applied the product early in the morning before the heat of the day drove the ants underground and me indoors. The next morning I went to inspect my handiwork.  No ant activity at all was going on around the mounds.  Good, I thought, very, very good! **How it works** Basically, the product is a bait and poison.  The worker ants are attracted to it and they bring it back to the colony within the mound where the queen feasts on it along with the rest of them.  It quickly kills the colony, or at least the greatest part of it.  The active ingredient **Lambda-Cyhalothrin **does its job within 24 hours.  Yes, it had done its job and done it quickly.  However, within 3 or 4 weeks new mounds started to appear and re-treatment was necessary. **Caution** Of course like most insecticides, it is a hazardous product.  I suggest you wear gloves when applying and wash your hands thoroughly after using. But the packaging also warns that it is **highly toxic to fish and aquatic invertebrates**, so it shouldn't be used close to ponds or where it is likely to run off into nearby waterways. **My Viewpoint** This Spectracide product proved very effective at quickly eliminating fire ants from our property, even if it was only temporary.  There are now other products, some from Spectracide, such as **Spectracide Fire Ant PLUS Preventer Bait Once & Done **that promise to control re-infestation for an entire season, that may prove to be a smarter buy.  I recently bought some.  I'll let you know how it goes in a month or so.   Regards, Rudi