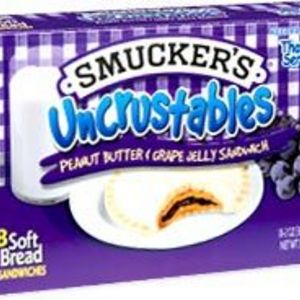 I have been buying uncrustables for over a year. I really like them. My complaint is I microwaved one for 15 seconds to thaw when I bit into it jelly squirted out and burned my chin and chest. I have bad burn on my chin. There is no warning on package about heating to thaw.

My kids are pretty picky about the crust on their bread, so I love packing these for road trips and whenever we go out anywhere. Food at parks and zoos can be expensive so we will grab these out of our freezer a few minutes before leaving and they will be thawed out by the time the kids are ready to eat. I love that the jelly and peanut butter are stuck inside the sandwiches because we have never had any issues with the kids spilling jelly on themselves like they have when we make the peanut butter and jelly sandwiches. The Smucker's Uncrustables are pretty small though, so I always pack one extra and the kids will split it.

I've always loved peanut butter and jelly sandwiches since I was really little, especially creamy peanut butter and grape jelly on white bread, and with EVERY sandwich I've eaten off the crust first because I think it tastes so much better with just the condiments in the soft part of the bread yet I don't want to waste the crust by cutting it off and tossing it. I'm like that with tuna sandwiches too. So years back, I can't even remember when exactly, when I first found out about Smucker's Uncrustables that were my favorite sandwich but made just like a pizza pocket I just HAD to try them. It was worth it--the peanut butter was smooth, the jelly was grape, and they tasted fresh out of the jar while the bread was still as soft as I like it and I could bite right in without taking off the harder brown part around the edges! Those things were SO good, and I didn't even have to dirty any knives or get crumbs all over to make it! I need to get some again.

When my eldest son first started having school lunches, he was so excited that he was able to chose what he wanted from the menu. But the first time there was nothing hot to his liking, he was given an Uncrustables. That day he came home telling me how great his cold lunch was. What's great about Uncrustables is that they're pre-made, ready to be eaten with just 30 minutes of defrosting. I guess as far as a sandwich goes, it's a pretty expensive way of buying a ready made pb&j sandwich but if you're short on time, a single parent, wanting a snack before practice, they're great. I made the mistake of letting one defrost out of the packet and 30 minutes later, the bread was already quite dry. My other niggle is that, obviously, you have to be careful at parties etc in case there are children with peanut allergies. As a parent of a peanut allergy sufferer (my youngest son), I would never feed this to children who were not my own just in case an allergy has not presented itself yet. Also, with the fact that these are pre-made, it means I'm not contaminating any plates, knives, bread boards and therefore there is less likelihood that my youngest son can be affected.

My kids love peanut butter and jelly but hate Smucker's uncrustables. I honestly didn't understand this at all. I thought it would be a really great idea. They are quick, easy, fuss and mess free. Well, leave it to my kids to make a mess free fuss over something I thought would be a step up and of course, something they suggested in the first place. My eight year old daughter thought this would be good for after school so low and behold, I bought them, not thinking twice about it. Several days later, after she remembered they were there, she decided to have one. Next thing I hear is oh my god - what is this thing! Before I could investigate further she comes busting through the bedroom with the silliest look on her face I have ever seen. Mom, this is nasty and I am not going to eat it! Okay, great, give it to your brother - ( who will eat just about anything). Here he comes, bolting in behind her, I am not eating that! So, I decided I would see what all the fuss is about. It wasn't nasty necessarily, more like interesting I would say. The crust being off was a nifty idea. However, the overall taste and texture leaves something to be desired. the jelly was kind of just sitting there in the middle, a little clumpy. The peanut butter was too thick in some places. The texture of the bread was strange, it had this unthawed aftertaste that is difficult to explain. The taste of the jelly was pleasant but the texture was not, the same goes for the peanut butter and the bread. I am unsure whether I got a bad batch, that very well may be the case.

I have mixed feelings about Smucker's Uncrustables. For one, I like crust on my sandwiches! A few years ago, I heated one of these up in the microwave and it ended up catching fire and burning. Overall, I don't mind the taste of these, but the texture is not the best. They're very soft and mushy and kind of just melt in your mouth. I like the grape ones better than the strawberry. I don't think I will be buying these anytime soon.

Smucker's uncrustables are a great idea. I do not lke crust, and neither do my two daughters. I spend a lot of time trying to cut the crusts off of their sandwiches without ripping the sandwich apart. The value for the money is not good, however. It would be nice if there were more sandwiches in the box, based on the amount you pay for the product.

These are great for kids lunch boxes. You can pack them right before school and by lunch time they are thawed out and ready to eat. My daughter seem to think they are cooler then the peanut butter a jelly sandwiches I make however, they are more expensive in the long run. They are very convenient for someone that doesn't have a lot of time in the morning. The only bad thing is if I want to eat one at home I hate waiting for them to thaw out.

These are my family's most favorite snack. Whether its for school lunches and mid day snack or an after dinner study snack. There's no mess and no prep. Just take out and go. The different flavors are a great hit with my kids. And with a picky Easter the no crust is an AWSOME additive. The jelly stays inside, so no mess in school lunches. No mess on hands or clothes. And super great for picnics. Throw in cooler and there ready by the time lunch is here. From 1-18 all the kids love them. And with it still being a healthy choice for a snack or meal it goes great with everything, from fruit to vegetables. Add a dip and juice and its a complete convenient ready to eat meal without all the prep work. Would defiantly like to see different combinations of the uncrustables. There a great hit with all the kids, and at school. Teachers love them, no mess and very easy clean up. Overall , we love uncrustables

Amazing on- the-go snack. I'm 41yrs old and am addicted! I eat about 4 a week. They taste far better than any peanut butter and jelly sandwich I make and they are fun to eat. At approximately 200 calories its a great way to satisfy appetite without oing overboard on calories. I love them!