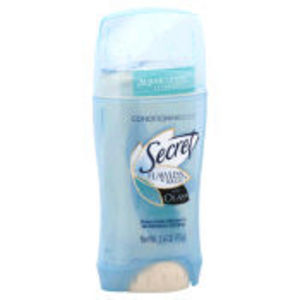 Back in high school, my prefered deodorant was Secret Platinum. I would get the Spring Breeze, and it was hybrid between a solid and a gel. Two clicks would dispense just enough deodorant and it lasted over 24 hours even with a strenuous workout. When this got discontinued and Secret started selling Outlast, I thought I would give it a try. It was nowhere near as good as what I had grown up using. Since this has Olay mixed in, it feels really lotion-y when applied and I just don't like that feeling of stickiness under my arms. That feeling is only enhanced after sweating, which kind of defeats the purpose of the deodorant. I also noticed that Flawless Touch didn't eliminate body odors as well as the original Secret product. In the wintertime, I didn't have any issues because I didn't sweat as much, but once spring rolled around, I started to stink halfway through the day. Not a great product, sorely disappointed.

I've been using this deodorant for years. I've tried many different body sprays and so on, but Secret is the only one that is sensitive to my skin. I also do not need to use it multiple times a day to keep a fresh feel and odor. I would recommend this deodorant to anyone with sensitive skin or anyone looking for long lasting effect.

I've been using Secret for years and have always been please with it. This product has all the benefits of Secret - it keeps you dry and feeling fresh all day. The conditioning with Olay leaves you feeling soft. The deodorant keeps you smelling good, even when exercising strenuously.

I was fortunate enough to have a coupon for buy one, get one free with the Olay line. This Secret deodorant was being offered free. I have been wanting to try it, so what better time than to get it without cost? This Secret is more expensive than some of the other Secrets, but it has Olay in it and I can definitely recommend that line. This product goes on very soft and does not leave residue on my clothes. This is a big factor as far as I am concerned. I also chose the unscented variety. Nothing smells worse than hot deodorant. It has a faint smell in the container but no smell when applied. I haven't noticed any cons to this product. It controls odor, perspiration and goes on smoothly. When it comes time to purchase more, I hope there are coupons available because it is more expensive than what I am used to purchasing. I can't say I would pay the extra price. I do recommend this product.

I like Secret Flawless Touch. I've always had different deodorant's that were always drying me out and some that by lunch needed to be reapplied. I love this stuff cause it makes my skin feel soft. I still have problems getting it on my shirts though. But I would not talk it down to much about getting it on my shirt because I have yet to master the art of putting my shirt on with out the white marks. So I have been putting it on after.  Great product that I just happen to buy one day and have kept going with the same product for at-least a year now.

I don't think it works very well by a way of what its supposed to do either. Two hours after application you have to reapply or smell not so nicely. With the having to twist it everytime you use, I don't think its very cost effective either. Deodorant is just one of those things it's hard to live without. Unless you have friends who can't smell or just never sweat, it's impossible to get away without some sort of deodorant. For women, Secret is one of the brands that can't be missed. It's strong enough for a man that's made for a woman; what could be wrong? I can tell where it went wrong - the Flawless Touch. I'll admit that it was on sale when I purchased it. Two for the price of one; not a bad deal! When I brought it home and first tried it, I was a bit put off by the fact that it wasn't a solid. I brushed it off; what was I going to do? I had already opened the package. May as well use it!  I've used one entire container of it now, and I can honestly say that it is TERRIBLE. However, there usually is a plus to everything:  Easy to use style - It's not exactly hard to get more deodorant to come out. Take the container, give it a twist (or two if that's your style) and you're ready to apply. Its a reputable brand - Secret isn't the newest deodorant on the block.  According to their website, they've been around since 1956. Now, over 50 years later, they are still producing quality products. For me, though the negatives far outweigh the positives: "Goes on clear" - LIARS! No matter how much time I give it to dry, it always ends up on my shirt as I put the shirt on. Sometimes I even notice that if I sweat, it turns it into even more of a mess. "Strong odor and wetness protection" - Sure no one notices your BO, they are too busy trying to ignore the fragrance coming from your underarms. Their scents aren't subtle.  In fact, most people notice the scent first, and not in a good way. "Smooth, lightweight formula" - In this case, lightweight means that it's easily spread around. In this case, it's supposed to mean that it won't cake to your arm pits. Guess what? If you over apply AT ALL, you're going to have caked pits. I use one click for BOTH arm pits (not one click for each) and I still end up with too much formula. However, then you get into the issue of putting on TOO LITTLE and not being covered.  OVERALL, I would suggest looking over the Flawless Touch collection. Maybe I was a rarity and just ended up with a bum product. However, after using it for 2 months now, I can honestly say I'm very disappointed and embarrassed at the state of white streaks on my shirts.

I used to buy whatever was cheapest at the store -- I actually used to do this with a lot of products. Not everything that is cheaper is comparable!! But this is wonderful since you have the fresh scent all day, whatever you do, where ever you go. It keeps you dry and comfortable while you get everything crossed out on your to-do list! The best feature I feel is that there is no nasty white residue left on your clothing! Dressing up for an evening out, in that little black dress, no one wants to see marks under your arms! Even on that "everyday tee" or tank -- its not a pleasant sight or feeling! It comes it several different scents as well. Which you can pick your favorite or have a few to mix and match with. My favorite is the Clean scent.

For some reason I thought that since Secret is more expensive it must be better. It is a little bit but not much better though. Packaging is very cute and brings a lot of attention and for the most part that is what we are paying extra for, well and name I guess. It protects like most other solid deodorants. It smells ok but not like expensive perfume or anything. More like regular body sprays, of which if you use too much you may get a little headache. The way the deodorant feels on skin is good, it's smooth. I even used it after shaving my underpits and it didn't hurt or burn or anything. The reason I don't always buy it and sometimes get different alternatives is because of its price. However, if you have a coupon, it is definitely worth buying.

Secret Flawless Touch Conditioning Solid with Olay is my new fave and really does help you shave less. When I first opened the cap I expected a solid bar of deodorant, as most might assume when they see "Solid" on the package, but that wasn't the case. I had used this type of deodorant a few years ago and was not impressed with its performance as a deodorant and when it got hot and was sitting on its side, it melted ALL over. While I was a bit displeased with my mishap, I decided to try it anyway and see if its claim to "shave less often" was actually true. Well, not only is it VERY true, but I don't want to use the other bar of Secret that is a "normal" solid that I had left over. It also works exceedingly well at keeping you dry and fresh smelling. I haven't liked creamy deodorants because they never seem to dry and feel sticky and also make a huge mess all over your clothes that is hard to even wash out. I have never been more satisfied with a product in my life and highly recommend Secret Flawless Touch Conditioning Solid with Olay to any woman!

I love how soft my skin feels after using this. It makes shaving so much easier too and I love the scents that are available, but i do prefer the unscented since i want to smell my perfume! That's how good it works, you smell the deodorant not odors. I like the shape of the dispenser and it's pretty esthetic so i don't mind leaving it on my counter. I think it's the only deodorant that i can use that doesn't make me smell worse! I don't know how many products that i've tried that have actually accentuated my odor rather than take it away. This does not do that, it keeps me dry and it really moisturizes your skin. However, it isn't exactly "clear" because if you put on too much it does start to look white and if you rub on your clothes, it will show up. But i put on one layer and it takes care of the job. If you put too much it will cake on so i wouldn't recommend overdoing it. I would like to find a product that is solid and really goes on clear but so far, all the others don't work nearly as well as secret.