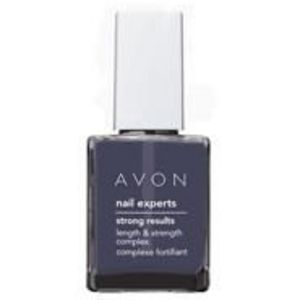 This is hands down the best product of it's kind I have had the pleasure of using. It ticks all of the boxes and is the only one that has ever worked the way it says it will for me

This product is the best thing I have ever found for my nails. I don't know anyone whose nails have looked as short and damaged as mine before using this product. With the exception of the little finger on each hand, I had painful splits in every nail that extended into the pink section of the nail bed, often causing bleeding. This was after having 6 months of regular manicures at salons - just polish - not even artificial nails causing the damage. I had tried a range of Sally Hansen strengthening products, cuticle creams, hand creams, vitamins for nail growth, gloves for washing up, and other strategies to fix the problem to no avail - products that stick to the nail making them noticeably more broken. I remembered using this Avon product in the 90's, and purchased a bottle at the end of 2011 on Ebay, unable to find it in the Avon brochures. I applied it twice a day to bare nails, and did not use nail polish during the treatment, as advised. While the instructions only recommended five days of use, I continued the treatment for three months every day until I had used up the bottle. After about 1 month, the split sections below the pink of the nail had grown out, and after 3 months, every nail had at least 4mm of pristine white tips, with no breakages! I wished I had taken photos to demonstrate the dramatic improvement. My nails were finally smooth, with good colour. I have been unable to locate this discontinued product anywhere in the world in 2012, and after 6 months of discontinued use, five of my nails have now split down the quick again, as the treated part of the nail grows out, leaving my naturally weak nails again. I wish Avon had not discontinued the product, which worked for my extremely damaged nails because it is not a base coat that prevents nails from breathing. It soaks into the nail. Avon's current Nail Experts range has not captured this effect, with their mineral complex doubling as a base coat. Avon - bring this product back, repackage it if you will, but realise that you have discontinued an amazing product that had no other competition on the market for women with severely poor nail growth.

I really, reeeally wanted the Avon Strong Results to work.  My nails tend to bend and peel -- just weak in general.  I never have all of my nails grown out at one time - there are always one or two broken off all the time.  I'd love to wear nail polish, but my nails are too ugly. I tried a couple drugstore brands of nail-strengtheners and was disappointed that they didn't work.  When I found the Avon Strong Results in a catalog, I thought:  "Oh boy!"  this has to work because it's Avon.  I'm a big fan of anything Avon. I've followed the directions -- you brush it on your nails twice a day for 5 days in a row, then stop using it for a while.   The directions say not to wear nail polish while using Strong Results, and I never did.  So I've used it for 6 months now -- for one week a month I brush it on twice a day, every day.  Then I go without it for a couple weeks -- then use it again another week.  I haven't seen *any* changes in my nails.  They are still weak, peel, and break often.  I'm down to the bottom of the bottle now, but will continue using it until every last drop is gone.  I'm sorry to report that the Avon Strong Results did not work for me - but I keep hoping.

A freiend who uses Avon products all the time told me about this product, and I'm so glad she did. My nails had gotten more brittle and weaker the older I've gotten and the more years I'd used nail polish, etc. This product is not a polish, although it does give your nails a healthy look and sheen. It's a treatment that has diamond dust, calcium, hyaluronic acid, panthenol and hydrolized soy protein in it. It goes on quickly and easliy and dries in seconds. I live in a very dry climate which does seem to affect my nails, and I also do a lot of household chores. This product has really made my nails stronger and they now grow longer without breaking right away. When  Nail Experts Strong Results Length and Strength Complex was on sale my friend let me know and I bought 4 bottles because I wanted to be make sure I had a good quantity on hand if Avon decided to discontinue it. I'd tried a number of other nail 'hardeners' over time, but I really love that this just absorbs into the nail and does not leave anything on my nail that needs to be removed later.

I am an Avon representative and I try to take advantage of being "in the know" when it comes to our products. I like to try products myself before recommending them to my customers. As the mother of a toddler, I do not have a lot of time to spend taking care of my nails. With all of the dish washing and roughousing that I do from day to day, my nails have been breaking like crazy. My grandmother tried a product that she found at a local drugstore and although it was much pricier than I wanted to invest in, I decided that I would give it a shot. Then I noticed the Avon Nail Experts Strong Results Length and Strength Complex was on sale in one of my Avon brochures. I gave it a try and I am glad that I did. I have been using it for about 2 months now and I try to put a fresh coat on at least a couple of times a week. I have also painted my nails over the clear coat. My nails are stronger and longer and look more like they did before I abused them so much! Very affordable, too even when it's not on sale!