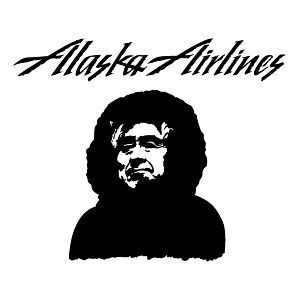 First time and last time ever flying Alaska airlines. The service on the plane by the stewardess was awful and the AC and air didn't work on the plane! We were all hot and uncomfortable and on top of that, there were no screens or movies available to watch on board! We're in the Age of Technology! Update your planes!

If you are an alaskan resident and join club 49 you get 2 free bags checked and 2 yearly 30% off coupons, and sale every few months on ticket prices. hit or miss with the service as any other place, but more good than bad experiences in the last 30+ years.

I've been in Alaska air a few times and have always had an amazing experience, my last time on an Alaska air plane was amazing. Me and my boyfriend had his service dog with us, we ended up with bulk head seating, seeing as his service dog is a 80 lbs German shepherd this was awesome due to extra foot room and room for her, we were NOT first class but us being directly behind first class the flight attendants treated us just as such. Which was so unusual but amazing, it was his dogs first time ever flying so she was a tad nervous but the flight attendants were so kind. The plane had usb ports, plug ports for laptops and had tv's with free movies. Also if you sign up for club 49 if you are an Alaskan resident you get 2 free checked bags. Ill never want to fly any other airline.

They made us wait on the ground an extra 2 and a half hours for seemingly no reason at all. Plane was old a trash and so were the flight attendants

We flew from Omaha to Portland non-stop and it was a great flight. The staff was friendly and accommodating. The only pitfalls were that they did not have a blanket for me to use on the way home (we sat in first class) and I wish the plane itself would have been more upgraded with technology--individual screens would have been a nice touch.

My mother passed very suddenly and unexpected. I got the news at 4:30 pm booked a flight for 7:55pm. The tickets last minute were not terrible considering the only seats available were first class. Our seats were separate. Got to the airport asked if they could seat us together at tge gate check in, said we needed to talk to the ticket counter once we got through TSAWe got to the counter and the gal from the gate check in had already called and they got us seats together. The flight crew was so friendly and saw I was not in a good way. They kept the great service going and went above and beyond. They brought me a chocolate bar (just me) to try to cheer me up. They seemed very genuine and kind to me. During a difficult time that kind of kindness is so great. They tried to keep it discreet as well while I bawled my eyes out the whole flight. Great service! Only one complaint. That chocolate bar they gave me to cheer me up, which I ate a few days later. That was the best chocolate I have ever had in my life. Looked it up online and they are about $8 for a very small bar. Now I want more lol!

Do not fly Alaska Airlines. I was told I couldn't cancel my trip because my grandmother had a stroke and I was now a full time care taker. I was told however there is good news, if she dies I could extend the tickets for up to a year. What type of company spins the death of a family member as a bonus for flying.

My family's trip to see my sister in Walla Walla, Washington could have been much better than it was. On the final leg of our trip, the airplane from Seattle to Walla Walla, flew us all the way out there, and refused to land, turning back to Seattle instead of choosing to land in a nearby airport. The pilot didn't seem to care that he had stranded all of his passangers in Seattle. His response over the P-A was short of, "sorry, good luck with the rest of your trip, I don't really care what happens to you. My mother panicked. The customer service folks were nice, but not very helpful. I had nobody there that genuinely wanted to help us. I had to do the leg work for both our parents. The phone number we were given for the Ramada was for the wrong Ramada and my mother ended up paying for two hotel reservations at midnight. I feel that the airline should have compensated us for our loss time and energy wasted. I don't think they really care about the passengers, but they pretend to. I was severely disappointed on how things were handled. A stewardess we talked to later said, "The pilot could have landed, but he chose not too." She was helpful, once she was off the clock. Service We were served if not valued. I felt that the handling of our situation was handled very, very, very poorly. I think that this pilot should be fired or have to compensate all the passengers he stranded because he didn't feel like landing in Walla Walla or land at a neighboring airport. He wasted time and money by returning to Seattle. He used poor judgement and the customer service was lacking when we had to clean up his mess. In-Flight Accommodations I don't believe there were any accommodations. Free wine was served when the pilot refused to land. The snacks were awful, the wine was bad. I have had better service on Southwest Airlines. I asked if they had any other snack other than mustard pretzels and the flight attendant said that they did not and proceeded to snub me and move on to the next person.

This airline is second to none. It has thought of everything from ambassadors for the disabled, like me to making sure I am comfortable on the flight. They seat us in rows 6 that have only 2 seats allowing lots of room and making sure that I am first one on and the last one off. Service Service is excellent. The in flight attention is remarkable as they make sure I have water for my medication or a pillow for me to rest on. I think when I came in a wheel chair, they realized that this customer would need extra attention. And I got it!!! In-Flight Accommodations Excellent. As I mentioned above they make sure we have row 6 to have the extra space. You don't appreciate that until you are disabled. Even though our trip was only 4 hours, Kelowna to Las Vegas it went by so quickly. By the time I had my juice, it was time for pretzels and then nap time. I highly recommend this airline as having flown with it many times they continue to provide the same quality service.

I flew to see my family this summer after Alaska Airlines had an awesome deal on tickets. They marked them down to sixty five dollars one way, which is awesome! The only downside was that I had to pay a fee of thirty five dollars for my luggage. Most airlines are that way, but because I usually fly Southwest Airlines, I guess I am not used to paying for my luggage. I flew with our baby, and they do not charge for carseats, or the stroller I flew with. I loved taking my stroller with me. I was able to get through the airport with it and then as I boarded the plane, I left the stroller at the front with them. They take care of it, and right as you get off the plane, they have all the strollers up front waiting for you, which is nice. The flight was actually somewhat on time, and we actually arrived to our destination twenty minutes before scheduled. It was really nice being early considering that does not happen very often. The flight wasn't too overcrowded and I was satisfied with the Alaska Airlines employees. They were all helpful and cheerful.