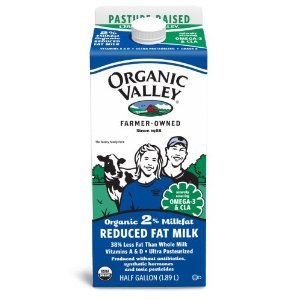 Organic Valley and the Cows who give us many of the pourest dairy products. Every day we drink and eat foods from these animlas NOT fed with growth Hormones or Chemicals. Chemicals our bodies can NOT metabolise or EXCREATE, so building to toxic levels causing a multiple of problems yet to be diagnosed. Our brains can function naturaly when we stay with organic valley products. The consumer has a good balance of 'wellbeing' when eating or drinking Organic Valley products. Always a high standard of product knowing children and adults will beinfit from these organic products. LOVE ORGANIC VALLEY and so do my dogs whom I treat with there milk on an occasion.

If you're going to get organic dairy, Organic Valley is the way to go. Usually we buy raw milk, but when we need to buy storebought, we get OV. Everything they make is good from milk to eggs to half & half. We buy their products every week. My daughter especially loves their cheese!

Two-percent passes in taste for whole milk. As a bonus, it keeps many times longer than ordinary milk. After consuming this stuff regularly for a month or two, I knew it wasn't my imagination that this milk tastes far better than standard bovine secretion. That's when I decided I had to figure out why. My initial suspicion that OV underrates the fat content of its milk was put to rest by an article in Scientific American, "Why Does Organic Milk Last So Much Longer Than Regular Milk?" It turns out, the answer to that question is the same reason that the milk tastes the way it does, a form of processing called Ultra-High Temperature or UHT. In a nut shell, typical pasteurization involves heating milk to 145 degrees Farhenheit for 30 seconds (or, depending on the method, 160 degrees for 15 seconds) to kill off some (but not all) bacteria. By contrast, UHT flash-torches the milk at a sizzly 280 degrees for a mere 3 or 4 seconds, producing all-out bactericide. The total extermination of microbes is the reason the milk keeps for seemingly supernatural durations. UHT is a more expensive type of processing but because the local production of organic milk is far from ubiquitous, it is a necessary expense for companies like organic valley that reach supermarkets across the country. Were they to use other methods of making milk safe to drink, the milk would go bad before it even reached some shelves. A side-effect, per se, of UHT, is that toasting the milk at such a high temperature cameralizes the natural sugars, producing a sweeter and creamier product as compared to regular milk. So, there you have it! That's why this stuff tastes so good and lasts so long. The difference doesn't really have anything to do with the fact that the milk is organic, much less unprocessed (in fact, a form of processing explains the difference). Nor does it have anything to do with chemicals introduced in the cultivation or processing of your typical milk. Nevertheless, there is a difference and I will continue to buy Organic Milk.

I started buying organic milk when my daughter was first drinking cow's milk.  I heard that if you are going to spend money on one thing organic, buy milk.  Since then, our whole family has transitioned to organic milk.  We have tried several brands but are very satisfied with organic valley.  I like the taste.  My son drinks the whole milk that has extra omega 3's.  My husband and I drink the 1% and it has a wonderful taste and appearance.  I also notice that the expiration dates seem to be out longer than other milk I have purchased and it tastes very good despite how much longer it may end up sitting in my refrigerator because I buy more at one time.  The only negatives I can think of is of course the price but it is definitely comparative to other organic milk brands at the store I shop at.  I have gone to the organic valley website to try and get coupons but have had difficulties printing the coupons.

Baffled at how other reviews seem completely swept off their feet.  There is indeed an aftertaste - I have given Organic Valley Milk three tries, and it's there.  I know it's likely better for me than regular milk, but my taste buds don't lie and I'm not going to risk an unknown flavor on my children.  The least the company could do is admit and explain the aftertaste; most people who are willing to pay for organic milk are willing to adjust their tastes as long as they know the taste is not unsafe.  The added disclosure will also ensure consumer confidence as well.  Until then, I'll be trying other brands - it is my duty to be a skeptic for my children.

I started drinking Organic Valley 3 years ago. It's one of the few Organic purchases I never change. It lasts longer than any other peocessed milk, the skim milk has the consistancy of 2%, & tastes better than regular processed milk.  I had 1/2 gallon for 2 weeks, and was still good when I finally opened it and took a week to use it up...and it was still good!  I swear, mainstream, processed milks must put something in them to make them go bad faster so we'll buy more. I just wish Organic Valley wasn't so expensive so I could drink more.  If price were not a factor, I'd probably drink a quart a day!  I will never go back to drinking regular milk after seeing the benefits of Organic milk.  I guess if it lasts longer, that makes it a bargain.