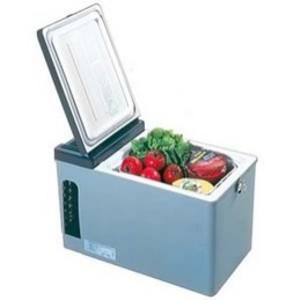 I bought this box as an auxiliary refrigerator/freezer in my mini-motor home, mounting it in the driving compartment between the two bucket seats, where it fits exactly.  (It's a Ford E350 chassis, in case you're wondering). The main fridge, and pretty much the standard for all motor home fridges, is the no-moving parts kind -- where a heating element (usually a choice between LP gas and electric) heats up the refrigerant which then is forced through the condensation/evaporation cycle that creates the cooling.  This isn't one of those. This uses the same technology as the one in your house, with a motor driving the compressor. Right away, this makes you think, "Oh, gee, it's got moving parts, that makes it susceptible to breakdown".  Maybe, may be, but it sure hasn't happened to me! This box has been rock solid, always there, always working, never a problem.  Well, unless you count operator error. The temperature is continuously variable by a knob on the top, which isn't calibrated to any temperature -- you just set it, put a thermometer inside, test it, then reset it until you get the temp you want.  If you set it all the way to the cold side it becomes a very effective freezer.  This temp knob is a potential source of operator error, since someone accidentally brushing against it could make your stuff either frozen or warm, depending on which way it got nudged.  I suggest putting a piece of duct tape over it once you find the right spot. It's not self-defrosting, so you want to be sure the lid isn't opened any more often than necessary.  Because the lid is on top, when you close it it looks closed, but if you neglect to snap down the little hasp it won't make a good seal, and then you've got cold leaking out and moist air leaking in -- which you'll regret when it comes time to defrost. Another thing that can happen is the lid slides sideways a tad on its hinges, so when you close it it isn't exactly engaging the rubber seal, with the same end result about defrosting. This is easy to monitor if you're being careful to snap the hasp shut, though, because the hasp won't line up quite right.  Just a little nudge with your hand while the lid is up will push it back into place and all will be well. You have to be careful when you mount it to be sure you don't obstruct the ventilator louvers on the sides and top of the back.  This is where the hot air the box generates has to get out, and if you block it it will definitely make the box work harder than normal and, in extreme cases, even make it so the temperature inside would no longer be as low as you were hoping. It's powered either by 120vac (standard house current) or 12vdc (standard car battery). Other than for testing purposes, I've never run mine on 120vac.  Besides making no sense at all in an RV, the box consumes substantially less power when it's run on 12v, so  the choice is a no-brainer.  Astoundingly, it only draws 2 amps on 12v, which equates to 24 watts, whereas on 120vac it uses many multiples of that. Another operator issue to be aware of: Making sure power is always on.  The unit comes with cigarette lighter connector for dc, but if you use this you need to be sure it never slips out or you'll have a box full of spoiled stuff!  The pilot light on top is handy for monitoring this.  You might want to hard-wire it into the dc of your rig to avoid this potential problem. Because it runs on battery rather than LP gas, it makes a very, very nice backup in case something bad happens to the LP gas source for the main fridge. Besides its normal function of just adding more space to the very limited capacity in the main fridge.