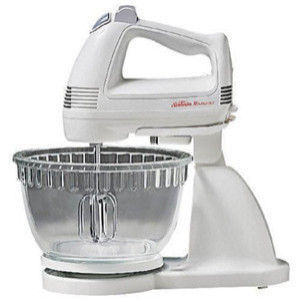 It is well-made and a cheaper alternative to the more expensive brand, too bad it doesn't offer the attachment capability of the more expensive mixer. Overall I am pleased with the mixer, I have been using it over a year and it is still working great.

I have had this mixer and used it on the stand for years, and I am always completely surprised it has lasted because the plastic stand does not look like it would hold up over time. But it sure has. I make a lot of cakes and frosting, and this does the job just fine. The lowest speed is too fast for my liking - it seems like there is little difference until you get to medium and then it's just fast. So more speed options would be great. Also, I have tried to use it for bread dough (since mine came with a dough hook) and although it worked, it shook on the stand so hard I thought for sure it was going to snap in two. Like most mixers, you have to take care to not let batter or food creep up the beaters into the openings. This mixer comes with two bowls that fit into the base, which makes the bowl spin when the beater is used. This is a nice feature, because you can scrape down the sides as it spins. Easy to clean, and overall I have been happy with it.

I just received my Sunbeam MixMaster Combo for Christmas and have already baked several batches of cookies.  I love this mixer!  I had been borrowing my mom's Sunbeam mixer for years when I had lots of baking to do and I'm so glad I have one for myself now.  My mixer came with dough hooks which I've decided works great with heavier dough mixes.  My model also has the 5-speed switch at the top which I like a lot better than my mom's model on which you turn the speed up by turning in the back.  I also love that I can use my Sunbeam mixer has a hand mixer or keep it attached to the base.  Keeping it attached to the base is what I love about it the most because I can add ingredients easily without the worry of the mixer flopping over onto the counter and spewing dough mix throughout the kitchen.  There are other brands available but Sunbeam provides a wonderful product at a great value for those of us on a budget.

I got this mixer from my mom one Christmas season when we had a bunch of cookies to make. I wanted the "real" stand mixer but just couldn't see throwing down that much money for something I wouldn't use but once a month, or less. After opening up the box I was a little disappointed, but after using it I realized that it was perfect for what I needed. It doesn't make easy work out of mixing, but it gets the job done pretty quickly and you at least have your hands free, for the most part, to dump ingredients in. It seems to get bogged down when the dough gets think when making cookies, but making cakes or other foods with thin batters is super fast and easy. I keep mine put away until I need it, and is an appliance that I will go through the trouble to pull down when I'm baking. The biggest mistake you can make is thinking that this is going to be like the big brand name mixer that you see all the Chefs using. It doesn't work like those at all, it is basically a hand mixer that is mounted over a bowl.

When my hand mixer broke right during the christmas baking season, I "very loudly" hinted to my husband that I could really use a stand mixer. That would make things a lot easier on me.  So for christmas my husband got me the Sunbeam Mixmaster 2372. Not long after christmas I got to use it the first time. I used it to mix batter for cake. It worked wonderful. The standmixer really helps when you have to beat eggs for example for a long time. I have used it for all kinds of batters and it works just great. However when I have tried to use the dough hooks on some heavier dough, this mixer didn't do a good job at all. The bowl wouldn't turn and it just couldn't handle the dough. I would have loved to use this standmixer for my bread dough, but that was not working out. Another thing I didn't like about the standmixer are the heavy glass bowls. It has a small one and a large one. It's hard to hold the large bowl with one hand and scrape out the batter with your other hand.But as long as you're only using the beaters on soft dough, it works great.

I wanted the KitchenAid Artisan stand mixer. It was way too expensive. I got the Sunbeam Mixmaster Hand/Stand mixer as a substitute until I saved up enough for the big guy. I thought that after I had bought my KitchenAid mixer, this one would be relegated to the back of the cabinet, or put out to pasture on the sad appliance shelf in the garage. This little guy has held his own and is sometimes used even more than the Artisan Stand Mixer. What this is is a hand mixer with six speeds and a speed burst button. It comes with traditional removable beaters and dough hooks. Included is a heavy glass bowl, and a plastic stand. The hand mixer can snap in to the plastic stand, and the glass bowl sits atop a small turntable underneath. The mixer stands up vertically for when you are putting your ingredients in the bowl, and you put it in the horizontal position with the beaters in the bowl, when you're ready to mix. On a traditional stand mixer, the beaters go in a circular pattern and the bowl is stationary. With this one, the beaters are stationary, and the bowl spins on the turntable. I think this is great for thinner batters (like pancake), to batters of medium thickness (like drop cookies). The motor is 200 watts. That's a lot stronger than your run-of-the-mill hand mixers. There are six speeds, and a "speed burst" button is on there. If you need to power through a little bit, push that button and the mixer speeds up considerably. The danger in this thing is burning out the motor. The speed burst needs to be used judiciously. I am a pretty experienced baker, so i have not burned mine out. If you start getting into batters for thicker drop cookies (especially ones with oatmeal in them), or try to use it for roll cookie batter, you're probably going to kill this thing,* if you use it on the stand*. Since the mixer snaps off, you can use it to mix the batter the normal way on a very slow speed. Better than hand mixing, not as good as a stand mixer. The bowl it comes with is heavy duty glass. Unlike the bowl that comes with a stand mixer, this one is more versatile and can be used for other things like marinating meat or putting a salad in there. The stand doesn't lock into position though. If the batter's pretty thick, you have to press on the mixer to keep it down, and you have to spin the bowl on the turntable yourself. Actually, I think this hand/stand mixer scrapes the sides of the bowl better than a stand-only mixer. It's also way better for batters with less volume like pancakes, waffles and scrambling eggs. This mixer has four pieces: the hand mixer (including the beaters), the bowl, the lightweight plastic stand, and the removable turntable the bowl sits on. It doesn't weigh that much, the pieces can come apart, and can be stored in different cabinets. If you don't have a lot of counter space that is a huge advantage. Stand mixers are big and heavy. They need to have a permanent spot on the counter, and would be way too heavy to put in an upper cabinet. All the pieces of this (except the motor, obviously) are dishwasher safe. The eject button spits out the beaters, with no need to fiddle with them to get them out. I have made many batters and bread dough with this. It's very versatile and fits the niche between hand mixing and stand mixer. It is also a fraction of the price of a stand mixer. Even if you own a stand mixer, The Sunbeam Mixmaster hand/stand mixer is a worthwhile investment.

The Sunbeam Convertible stand mixer is one of my all time favourites.  I can use it as a hand or stand mixer.  It makes cakes, but with a touch of a finger comes off the stand to whip mashed potatoes in the pan.

I have had this mixer for a while now and it is the best mixer I have ever owned.  In the past I have had problems with motors burning out on the more inexpensive mixers.  I received this one as a gift, but would have bought one myself otherwise.  I have been very happy with this product and with the rotating table it cuts out a lot of the work.  I have been able to make things as simple as cake mixes and it is durable enough to knead the dough for homeade bread.