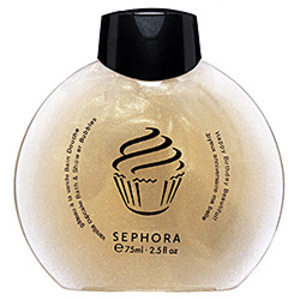 This is one of my all time favorite bubble baths. I purchased it because I have been using the Vanilla Cupcake body butter from the same brand. I love the scent of that stuff so I decided to purchase the bubble bath as well. It smells just as wonderful and works great. It creates great bubbles in the water and leaves the water smelling incredible. The bubbles last a decent amount of time too. This is definitely worth what you pay for it. Effectiveness It is really effective at creating bubbles and leaving your bath water smelling nice. It also works really well at getting your skin clean. I always feel refreshed after taking a bubble bath with it. The bubbles also stay around a decent amount of time in the water. Scent The scent is incredible. It will leave you smelling really nice. I use the body butter have taking a bubble bath which increases the scent. I often get compliments when using this scent. It is great.

A few years ago I got a very interesting bottle of Vanilla Cupcake Bubble Bath and Shower Gel. It came in a clear round bottle with a black top on it and a small hole so that you don't end up putting a ton of gel on a cloth or sponge at once. The color was a pearly ivory yellow and the smell was very vanilla and did smell like vanilla cupcakes. It is pretty thick and foams up well. Unfortunately this stuff caused itchy problems for everyone in my family, and it was a bit difficult to get out of the container after a while due to the shape and the way it dispenses. **INGREDIENTS** *Water, Sodium Laureth Sulfate, Glycerin, Cocamidopropyl Betaine, Sodium Chloride, Fragrance, Disodium Laureth Sulfosuccinate, Coco-Glucoside, Glyceryl Oleate, Styrene/Acrylates Copolymer, Sodium Benzoate, Citric Acid, Potassium Sorbate, PEG-150 Pentaerythrityl Tetrastearate, Polyquaternium-7, PEG-6 Caprylic/Capric Glycerides, Sodium Lauryl Sulfate, PEG-40 Hydrogenated Castor Oil, Sodium Hydroxide, Vanilla Planifolia Fruit Extract, CI 19140 (Yellow 5), Hydrogenated Palm Glycerides Citrate, Tocopherol, CI 14700 (Red 4), CI 42090 ( Blue 1)* Effectiveness Although it cleans well and does foam up for bubble bath, it has sodium laureth AND lauryl sulfate in it which caused terribly itching problems for everyone in my family. It really isn't a special bubble bath or shower gel, in fact, I found it on the harsher side. I ended up throwing it in the trash since none of us could finish it. Scent I found the scent of the vanilla cupcakes to be fun and exciting. It is a fake smell, yes, but sometimes it is fun to smell something sweet and interesting in the shower, despite our usual use of natural products with natural oils for fragrance.

I LOVE the smell! I want to eat it when taking a bubble bath. The bubbles are just the right amount, and the smell is sensational. It really, truly smells just like a vanilla cupcake. There are two small things I find kind of frustrating. The first is the shape of the bottle. It just doesn't like to stand up for me, and is constantly falling over. Yes, something small and insignificant to consider, but just a remark. Also, it can be hard to squeeze out of the bottle; just another observation. Other than these two small details, the product is great. I love just soaking in the water with this bubble bath. My skin feels soft and clean after, never mind smelling great. The aroma in the bathroom is just as wonderful as what you smell when opening the bottle. I just can't get over how great the smell is. A lot of products have these crazy fragrance titles, but this actualyly is as described. I highly recommend this all around, despite the two small notations.