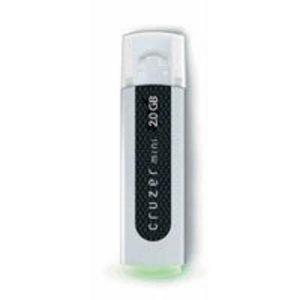 noone better than that ts earn 4stars awsome!!!!

The Cruzer Mini is a great flashdrive.  It is small and convenient, but holds a lot of information.  I tend to need certain files anywhere I go so having this small device with me allows me to use any computer.  It is a lot more convenient than having to carry a computer around with me all the time.  These devices are also great for storing pictures from my camera.  It allows me to empty out my cameras memory quickly.  These flashdrives are available in different memory sizes and all of them are very easy to use.  They are just plug and play.  They connect directly by USB port and a pop up occurs immediately on any computer for access to the different types of files.  You can even save things quickly from the flash drive to your computer.  I use a number of different flash drives, but this one I use for my important work documents.  It is very convenient, compact, easy, and helpful.  I don't know what I would do without it.

I enjoy this mass storage device because it's compact, easy to use and the software that comes with it has many options.  I have several mass storage devices but I prefer this one because of it's ease of operation. I can keep it in my USP port all day, the light stays on to remind me it's still in the port.  I can organize what I store under the documents folder and there is a very informative tour and user information.