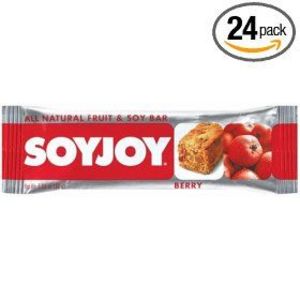 If you don't want a traditional protein or snack bar, there are many alternatives on the market that offer the nutrients you need, while also being equally appetizing. SOYJOY unfortunately is just not one of those alternative snack bars. The bars are very hard, and while I usually like chewy snack bars, these were more stiff than chewy. There also weren't many dried fruit pieces in them and they were actually really thin. There wasn't much taste in these bars and I thought they were overpriced for the quality.

I bought these because they were on sale and sounded like a healthy snack. They are very dry and have the texture of fruit cake. I had bought several and did not want them to go to waste so I ate them. After a while, I acquired a taste for them. They are not terrible tasting, but just not very appetizing. They are what I think of when I hear someone say a snack is "healthy". The snack bars are also kind of small. They are not shaped like normal snack bars. They are more of a long square tube...about half of the size of a normal snack bar. So if a normal snack bar fills you up, you'll most likely need to eat two of these. I tried different flavors of these. All the flavors were equally appetizing. I don't remember feeling any better after eating these for a while. They didn't seem to make me feel any healthier other than the taste. There are a lot of other healthy snack bars out there that are a lot more appetizing.

I really enjoy eating health snack type bars so I expected that I might like soy joy, but I definitely think you have much better options from other brands. Soy joy is pretty bland in flavor and the texture is weird. I wouldn't even really bother trying this.

Whoa - totally surprised that so many people seem to really dislike SOYJOY - you would think Kashi would get more negative reviews? Seriously, these bars are not bad at all, and if you want a candy bar or something similar, it's really just better to get one. First, these taste nothing like a Fig Newton, which are not those delicious little pockets of joy they used to be. SOYJOY is a bit more substantial, slender, and filled with a pleasing amount of dried fruit, but most of the bar IS made up of a moist soy meal. If you don't like the taste of soy, or want something with a lot of complicated ingredients that hike up the fat and calories (chocolate! yogurt drizzle! almonds! cherries!), avoid. These are relatively low-calorie, low-fat, but high protein and high fiber. **They're simple.** And that's what I like about them. I don't have to fight with some greasy white plaster that's supposed to be yogurt (um...when was yogurt hard and not chilled...?), a bunch of stale, tasteless nuts whose oils were zapped out to eliminate the fat, cheap chocolate, or some strange little colored bits passing as fruit. I prefer the blueberry flavored bars to the strawberries - the berry was a bit moister and reminded me of a fresh cobbler or pie, but without some gunky, nasty crust to take away from the flavor of the berries. I like the baked flavor of the soy, and you really don't even half to eat the whole thing at one time; I have a tendency to nibble off one because they're quite filling for such a small little thing. These are most certainly not decadent, and people who are used to eating larger bars like the ones made by **Luna** or **Kashi** will probably be disappointed in these. However, if you just want something simple, low-calorie (most range from 180 - 160), and that tastes like it was just freshly made, please try these. They're not for everyone, but I really love them.

I am a health food nut and love to try new products. I am also a nursing mom who needs to eat all day long. I'm busy and I look for easy food to grab while trying to make every calorie count. I have tried all of the flavors and only liked the raisin and berry flavors. My son thought they were awful. They definitely have run a good campaign getting the product out there through free samples and good coupons. I don't love them enough the buy unless I have a good coupon for them. Even then, they are hard to find. They also are a very small portion with higher fat and calories than I would like for such a small snack.

I like healthy bars. I also like trying new foods out. When I saw and add on soy joy website to try a free bar I signed up. My soy joy bar soon came in the mail. After trying it I am so glad it was free. It was very dry with a sour bite to it. I could not finish the whole bar.

I  got a sample of these in the mail, no one in my  house like it. They are gross! It didnt taste like fruit, I am 100 % for healthy snack baut this one doesn t taste good at all, I don't recommend this product, it isnt pleasant, I just tried the chocolate one may be the other flavors wil taste mmuch better !!!

I'm all for trendy healthy snacks... However out of shape I am, I still enjoy enjoy the delusion that cute healthy snacks will kill my sweet, fattening chocolate cravings. So when I saw SoyJoy on the shelf, I thought to myself - "This could be it!" .... Unfortunately, I was horrendously mistaken. My mouth was screaming "Oh my god, what have I done to deserve this!" All kidding aside though, I would NOT reccomend SoyJoy bars to anyone... Not even as payback. They aren't really too low on fat or calories. You're better off eating a piece of fruit with a glass of soymilk. If you enjoy the idea of convenience, however, I would highly recommend APEX Breakfast squares. They do have one more gram of fat and about 70 more calories, but are large enough to be split into two servings.

i thought that soyjoy was alright. i mean there too chewy but not in a good way. I also think that they should be a little cheaper . Some of them taste really bitter. Maybe if they had different flavors and were a little softer i would reccomond them.

I got a sample of these in the mail, I wish i hadnt. They are gross! Granted i only took one bite, but i dont think that would have made a difference. It didnt taste like fruit, I'm not really sure what it tasted like. I don't recommend this product, it isnt pleasant.