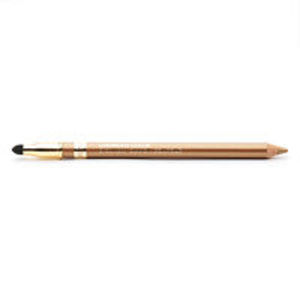 The Luxurious Color eyeliner from Revlon has a smudge-tip on the end for days you want a softer line, and it comes in six shades. The classic black, brown, and navy are Black Velvet, Sueded Brown, and Blackened Sapphire; the other three are Burnished Amber (oddly, this may be the closest it gets to plum), Brushed Pewter, and my own favorite, Antiqued Gold. This isn't part of their Colorstay line, but I find it lasts pretty well. The color goes on pretty smoothly and the pencil sharpens decently, though I've had it break or chip a few times despite using Revlon's own sharpener. (I've never had a lot of luck with that kind of pencil sharpener for writing pencils either, come to think of it. Maybe I should pick up one of the nice hand-cranked ones -- a good one of those gives a cleaner shave and a better point than electric!) I adore the Antiqued Gold color, though. It wouldn't work on everybody's coloring, but for light skin and brown hair with a touch of golden blonde, it's a dream! It's a darker, less sparkly gold than most of the others I've seen, which can tend toward yellow glitter; this is more like a slightly lighter, brighter bronze. Being a lighter color, it's more forgiving of a hurried, imprecise line (Or, ah, the occasional touch-up without a mirror handy) than the classic dark eyeliners that contrast more sharply with my skin. The smudger can help with that too. It draws a little extra attention to my eyelashes, as one would expect, but the shine on this color really brightens up my eyes in a subtle way. The look won't break your bank, either: Revlon is a relatively high-quality drugstore brand, and if you keep an eye out you can probably catch it on sale. I have not tried all six colors, but wouldn't mind completing the set.