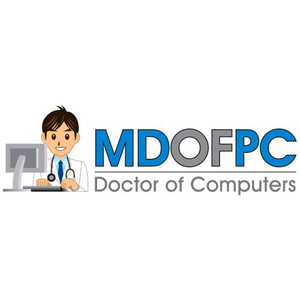 First off, the company is a single guy working out of his basement, meaning that when i spent $1000 dollars to have a "custom" computer built asap, i had to wait a week while his wife gave birth.....Which i understand but i sent him the money first THEN was told that it would take a week or so for him to get started on building it.  Unprofessional! Secondly it took the guy 3 trys to find a motherboard that was compatible with what he was trying to build( shouldn't a professional KNOW what parts go with what before hand??)the 3 tries with the motherboard took and EXTRA 2 weeks.During all this time i am asking for updates and status reports from the company and only got single word or VERY monosyllabic answers, terse short, "stop bothering me" answers.  - FINALLY the computer gets here, it actually works very well, nice and fast....then.....Bam...its stops working after a week and a half of running ti just GOES OUT.    So i contact Jon @ MDofPC and am told to send it back to Penn from Las Vegas at my own expense(and oh ya, if it breaks enroute your screwed) and he will take a look.Not having the money to ship it back i instead ask for a replacement part, which he orders.  Only he ordered the cheapest power supply  he could find, and it s was 10watts WEAKER than the original one he sent me.... if 640w wasnt enough then why is 630w any better???he refused to explain that to me for a whole week, merely replying "Power supply is Enroute" to over 10 emails.  I then started asking for a refund, as the whole expeiriece has been a tragically maddening event and i just want to do business with someone with pride in his product and business, and of course was stonewalled AGAIN. I was told "read the ToC" ....well i got NO ToC, not in the box or anywhere else....All i want is a full refund, the $1000 dollar computer i bought was poorly built and has never worked as advertised, the man "Jon" running the place is the rudest most arrogant SoB i have ever dealt with.  He has very little knowledge about computers and will take your money before knowing if he can provide you with what you need.   He is a jerk and i am taking him to court to get my money back.  He has refused to refund my money, so i have no choice, all i have now is a 1000 dollar piece of plastic. All in all, dealing with this company has been a terrible experience, i woudl NEVER do busiess with this person again.