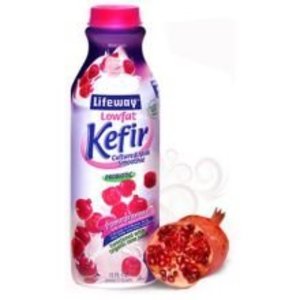 This thing tastes like battery liquid, no strawberry flavor at all, very ugly taste! Have to throw it away after the first zip!

Tastes like sour milk! If I wanted tangy milk, I'd buy buttermilk! Lol

I was first introduced to Lifeway Kefir by my chiropractor. After my initial exam and adjustment, he talked to me about diet, belly bloat, back pain and how they were all related. He said probiotics were extremely important in aiding digestion, and could have a great health benefit for me. I asked about taking a tablet, he instead suggested Kefir. He shared his family had been drinking Lifeway Kefir and had experienced great results.I decided to try the blueberry first and loved it! It was like a cool, creamy smoothie in a bottle. I have since used plain to make my own smoothies and have a favorite with plain nonfat Lifeway Kefir, peanut powder and a banana with ice. The Kefir is high in protein, keeps you feeling full and aids your body where you need it most! As I have been drinking the Kefir, I have noticed added health benefits of less bloating, added energy and staying fuller longer.

Almost everything, including the kefir you buy in the store has been pasteurized. This means that its nutrients have been altered and some completely destroyed, because during pasteurization all of the good bacteria, enzymes, and more are killed. The result is a dead product that contains some beneficial bacteria - not too useful to the body because the kefir has completely lost its nutritional synergy. It makes more sense to leave nature alone. Nature always knows best. Pasteurized Kefir: They only add one or two strains of good bacteria back in. They load it with sugar to cover up natural tangy taste. (The fake sugar contributes to yeast overgrowth in your body). Has no enzymes left in it which are needed for digestion and assimilation. Heat sensitive vitamin B6 and B12 are completely gone by heat during pasteurization. It's flat and not active. They use a starter instead of kefir grains.

I'm always a sucker for a good shake or yogurt, anything to add in some protein. I find that when I drink these, I stay so much fuller for so much longer. I work long days on my feet in a restaurant and am too tempted to snack on food when I can so I try to put in as much good protein and yogurt as I possibly can. The pomegranate flavor is so delicious, I can eat and drink it alone, or throw in some flax seed for a good boost. These are also great for the digestive system. It seems to help keep things moving along the way it's supposed to. Flavor/Taste The pomegranate flavor is amazing. It isn't as harsh as pomegranate juice but it's definitely more concentrated than just sucking on the pomegranate seeds. The flavor is great and I can drink it so easily, unlike most protein shakes on the market. This one doesn't leave a chalky taste in my mouth. Variety There are many other great flavors. Consistency It's very smooth. It's so easy to drink or to add extras to and turn into a chunky treat. Convenience You have to do a little prep work but it's worth it.

I had never heard of Kefir, and had no idea what it was until my Mom recommended it to me. If you don't know what Kefiris, it's a fermented milk drink that is filled with probiotics, and it is very similar to what a yogurt drink would be. I have tried several different flavors of the Kefir like the plain and the strawberry, but the pomegranate is absolutely delicious. It does really taste similar to a yogurt drink, but it is a bit thicker, and has a bit of a bitter sour after taste to it. It is an aquired taste, but it's really good after you get used to the sour bitter kick to it. The Kefir is a great source of protein, and calcium. It has 11 grams of protein, and 30% calcium in it. A cup of Kefir only have 140 calories in it as well. The probiotics in the Kefir are really good for you because they can help you with digestion issues like irritable bowel syndrome, and it is also good because it can stop you from getting urinary tract infections, as well as yeast infections. The Kefir has a lot of great probiotics and good bacteria in it, it will keep you healthy if you drink a cup of it a day. Flavor/Taste The Kefir pomegranate flavor is delicious, but Kefir has a bit of a sour and bitter after taste to it. It doesn't bother me though because i'm used to it. I actually like the sour taste to it. It's very thick, creamy, and it makes my stomach feel good. Variety Lifeway Kefir has a wide variety of different flavors like honey fig, strawberry banana, blueberry, cherry, chocolate truffle, raspberry, coconut chia, and much more. They also have a low fat variety, none fat, whole milk, veggie, Greek style, and a whole bunch of different other varieties, so if you don't like pomegranate there are plenty other flavors and varieties to choose from. There is a Kefir flavor that everyone would like. Consistency It's a thicker and more rich drink. It's similar to a yogurt drink but it's isn't as thin and it has a different flavor to it. Convenience It's convenient because you only have a drink a cup of it a day to get the full benefits from it. I usually drink it in the morning with my breakfast.

Lifeway Kefir is a great way to get your probiotics. Although this is listed under the 'yogurt' section on here, it is not your typical yogurt. This product is a yogurt smoothie that you drink. This comes in various size bottles and numerous flavors. If you have any digestive problems, I highly suggest this product. It helped me when my digestive system decided it did not want to cooperate with me. This smoothie is also low in fat, and high in calcium and protein. Those who have problems with lactose can drink these because it is 99% lactose free! Overall, this is a great product. Flavor/Taste The pomegranate tastes really good and is not overpowering. I have only tried a few other flavors, but they were also good. Variety There are NUMEROUS flavors and different varieties of Kefir. They even have organic options now! Consistency This does not have the consistency of yogurt. It is a yogurt smoothie. Sometimes I find the consistency weird but I get used to it fairly quickly. Convenience Lifeway offers an 8oz "grab & go" version of this product, which is convenient if you are in a hurry. It can just be tossed into your purse because it does not take up a lot of space.

This is a good product for your stomach/gut and it tastes good too. It is kind of like a smoothie, except not as sweet. It does have a bit of sugar, which helps improve the taste. Strawberry is definitely my favorite flavor, but peach and blueberry are also good.

Kefir is an amazing food I only recently discovered. It's wonderful for reversing/mitigating lactose intolerance and has the most natural probiotics of any food! Lifeway's is the best tasting and smoothest brand I've found. Check their site for coupons, too!