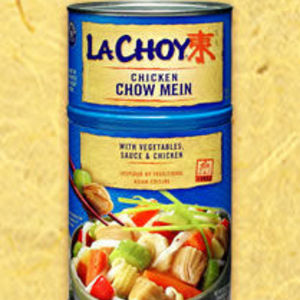 La Choy canned meals are rather like Hamburger Helper but in the Asian realm. La Choy meals are quick and easy, and if you like them, they are inexpensive and tasty. I had not had canned La Choy for years, and I really do mean years. My Dad liked Asian food. There was no place to get such foods around here, so my Mom bought La Choy from time to time. I think my Dad and I were the only ones who really liked La Choy canned meals. Everyone ate. That was just how it was back then. Complain and you could cook your own or go hungry. It had been 20 years or more since I'd had a La Choy meal. I just saw the cans at the grocery store, and I remembered how I used to enjoy the canned Asian meals. I bought La Choy Chicken Chow Mein and La Choy Rice Noodles. I've bought the noodles in more recent years to make candy dipped in butterscotch. The La Choy canned meals could be served over rice, of course, but we always had them just sprinkled with the crunchy rice noodles.   It's coming up on the 3rd year since my Dad died in a traffic wreck on I77. That was on my mind as well as fond memories of tasting my first water chestnuts and mini corn cobs in these mass produced Asain canned foods. My older son is kind of set in his food ways, so I did not hold out high hopes. The youger one will try more foods. The little guy and I were home tonight with the older one working, so I suggested we try the La Choy meal. Little guy was game, so that's what we did. The father of the boys dropped in just as we sat down to eat. He asked the younger kid if he was having ice cream for dinner as it was in a bowl. He told his Dad that he was having Asian food. "Harharhar," his Dad laughed. "Good luck with that." OK. I usually cook from scratch, but I do like some quick meals on hand. This is a day when I painted the tedious areas around French door windows. I enjoyed the heck out of my La Choy meal. My younger kid tried it. He was not keen on it. That was fine. I told him to get something else, and I'd see if the dog like La Choy. When feeding the dog, the father of the boys walked by with his dog. He said, "So you didn't like dinner huh?" I told him that I did, but younger son didn't so much. "Harharhar," again. Really, what's so funny? I made dinner. Granted, it was a convenience dish. There are two cans with La Choy. One has the meat and sauce. Heat that up. Drain the veggies. Add to the hot meat and sauce. Heat a bit. Dinner is ready. Serve on a rice bed or top with the La Choy crunchy rice noodles. Very simple. This meal was one that reminded me of the old days and fond memories of when my Dad was alive. It's hard to be objective about taste under such circumstances. I can say I really enjoyed my dinner other than getting laughed at about it. I will go in the middle with three stars. The older kid did not want to try this - OK. The younger did try it and did not care for it. I enjoyed my dinner a lot and the memories. The Dad person of my boys laughed at me - not once but twice over this meal. I do have a suggestion for all men . . . wanted or not. No matter what the meal is or how it turns out, don't laugh. That is just plain rude. If you want to be in charge of the meals, just go for it. If not, bite your tongue. The La Choy meal meant something to me and not just as a meal. It was a connection to the past. It did taste grand, because I could see my Dad again for just a second or bite. I can't be real objective about the meal overall, but I do know it hurts to get laughed at not once but twice. I don't guess I'll buy this again, but I'm glad I did and had a few seconds when not being made fun of to savor the memory of my childhood and my Dad who is now gone. Oh yes, and the dog (Hershey) did love this too. He got what my youngest did not eat and was thankful and happy and did not laugh at me one little bit.