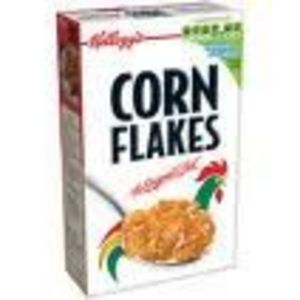 I am one of the few people I know who eats Kellogg's Corn Flakes plain! I don't add any extra sugar to mine. I love the classic taste of this cereal. It has a great corn flavor, but it's not too sweet! They are very healthy for you and have a low fat and calorie count. They are also great for breading for chicken!

Kellogg's Corn Flakes Cereal has been around forever! It is of excellent quality-it contains large, crispy flakes of corn-flavored cereal. It holds up well in milk and does not turn into a soggy mess. It is perfect for someone who does not like sweet cereal. You can also add a variety of fruits to it to add more flavor. Blueberries make a great addition to Corn Flakes! I also like to crush the flakes and use them to 'flour' chicken. It makes a much healthier version of fried or baked chicken and tastes just as good!

Kellogg's Corn Flakes Cereal is not all sugar and has a very good taste to it. This is a great cereal for children and adults both. I really like them and I usually will cut up some pieces of fruit to toss in there to eat with the cereal. You can sprinkle some brown sugar or regular sugar on this cereal if it is not sweet enough for you.

Kellogg's Corn Flakes is a cereal that I really appreciate for its simple goodness. It is a light, crisp delicious flake that can also be a nice topping on yogurt, casseroles, or even ice cream when combined with caramel. The flakes do become fairly soggy if left in milk too long, so you have to eat them quickly. I don't know too many people who like them soggy. Many people add sugar to these corn flakes, but, in my experience, this product becomes sweeter over time if you decide to stop adding the sugar. It makes and nice, simple, though not too filling, breakfast.

Corn flakes make for a great breakfast cereal, and the Kellogg's brand is the best. I've tried store brands, and they tend to get soggy in milk very quickly. Kellogg's does not. Corn Flakes can be used not just for breakfast, but can be mashed up and used for breadcrumbs, and they also make for a tasty ice cream topping. Definitely a pantry staple.

There are definitely people that would disagree with me, but I really don't think that corn flakes alone are very good. For example, I know that it isn't healthy, but I think that frosted flakes are absolutely fantastic. However, just eating the plain corn flakes with basically no flavor whatsoever is basically just eating solid nothing. I would recommend getting a sweeter cereal, but if you are one of those I-love-health-food types, I suppose that you could go for it. They consistently have coupons, sales, and offers available for Kellogg's cereals like this, so if you can snag a good deal on it, it might be worth purchasing.

I love cereal and sometimes you want a cereal with a lot of flavor and crunch but is still simple.  Kellogg's corn flakes is a sum of all three and is the perfect morning breakfast.  It is a simple blend of crunchy flakes of corn which stand up to any bowl of milk.  You will have crunchy flakes until the end of the bowl.  It is made with corn and sweetened with just a little taste of sugar for flavor and tastes great.  I love eating a big bowl for breakfast, but it is great for a snack and wonderful as a quick lunch or dinner because it is healthy.  1 cup has just about 120 calories and only a little fat, so it is the perfect choice for the breakfast table.  If you need a little boost, I like to add bananas or strawberries to the bowl or sprinkle some of the flakes on yogurt.  The corn flakes are also great for a crispy coating on fish because they are light and crunchy.  It is no wonder why this cereal has been around for so long and not changed, it is light and simple, but still has so much flavor.

I've been eating Kellogg's Corn Flakes since I was a kid. I've tried many other store brands but they just can't compare to the taste of Kellogg's. The flakes are crunchy & full of delicious corn flavor that store brands lack & they aren't that much cheaper anyway so I just stick with the original. Since I was a child, I could never acquire a taste for milk, so I would eat most cereal straight out of the box or with just enough milk to coat it so when it mixed with the sugar, it tasted ok...and believe or not, I also eat them in ice cream! No kidding! You'd be surprised how good it is! I'll crush a few handfuls of the corn flakes & mix them in a bowl of vanilla ice cream with Hershey's syrup...YUMMY! I know it sounds wierd but it is absolutely delicious, trust me! My sister actually gave me the idea when she did it with Rice Krispies which is good too! Anyway, Kellogg's Corn Flakes are the best, period. There are no other corn flake cereals that can compare.

My parents loved shoving Corn Flakes (about as plainly named a cereal as you can buy, besides) in front of me as a kid. I expect it was because the box was huge compared to others and stacked full of flaky goodness inside. And as a kid, I learned that the more sugar you poured on the Corn Flakes, the better it tasted. Corn Flakes are plain as heck by themselves, so you have to throw in some sugar and sometimes fruity goodies like bananas or strawberries. One of their best qualities is that they make a great base for cereal toppings that you can customize to fit your tastes for the day. Shave some chocolate on here to get a nice Special K Chocolatey taste. Corn Flakes are a great value, but consider the added prices of toppings to make it a really exceptional experience. I'm big on making my calories count, so if I'm not eating something specifically healthy that will help drive my weight down, I'm going to pig out on the best culinary experience I can make of a meal. Corn Flakes are a great base for such a meal.

In the late 19th Century, Dr. John Harvey Kellogg and his brother Will Keith - Seventh Day Adventists who ran a sanitorium in Battle Creek, Michigan and were strict vegetarians - developed (rather by accident) the original version of what we now call **Kellogg's Corn Flakes.** Dr. Kellogg was not, at least not on purpose, intent in creating the entire ready to eat cereal industry; he was rather trying to follow in the steps of Sylvester Graham, the British dietitian/religious leader who believed that bland but healthy foods would cure the world's ills by calming down people's passions and thus reducing personal conflicts and their need for sex, material things and so on and so forth. After experimenting with the recipe for what they called Granose (patented in 1896) and seeing how well the cereal was received by their patients, the Kelloggs brothers created what eventually became known as **Kellogg's Toasted Corn Flakes, **which are now sold as **Kellogg's Corn Flakes.** **Kellogg's Corn Flakes** ** **As the name implies, the cereal consists of milled corn pressed into flakes, along with a mixture of sugar (which was not in the original Granose recipe), malt flavoring, corn syrup and salt. (Vitamins and minerals are added, of course.)  The flakes are small and golden yellow, and they are pretty crunchy and flavorful when eaten out of the box. I normally try to eat **Kellogg's Corn Flakes **before they get hopelessly soggy; **Kellogg's Corn Flakes **don't stay too crunchy in milk for too long, and I tend to like adding a teaspoonful of sugar to the cereal *before *adding 2% low fat milk, even though the innate sugar content is high (corn syrup is also pretty sugary, folks).  **My Viewpoint:  **Taste-wise, I tend to prefer this cereal to Post's Toasties, even though both products have essentially the same ingredients.  I find that it has a mild malty aftertaste which is not unpleasant at all, as well as the expected corn-derived flavor.  As I have said in my review of **Quaker's Cap'n Crunch **cereal, I tend to gravitate toward sweetened cereals more than to unsweetened ones, but **Kellogg's Corn Flakes **has been a long-time favorite of mine since I was a wee lad of five. Not only that, but you can find **Kellogg's Corn Flakes **in almost every country with which the U.S. trades.  I've bought or eaten this cereal in Colombia (where we lived for six years) and during my three-month study-abroad stint in Seville, Spain. I normally eat **Kellogg's Corn Flakes **with just milk and a bit of sugar, but I have been known to add sliced bananas or strawberries on occasion.