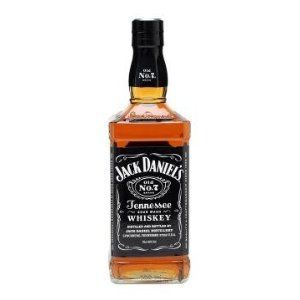 Jack Daniel's Old #7 Brand bourbon is a classic. There is nothing like sitting back and sipping this great tasting bourbon. They did adjust the recipe a few years back but that does not make a noticeable difference in the taste. This is an American classic and I will always enjoy my dear old friend Jack.

Who doesn't enjoy a good cocktail at the end of a long stressful day. One of my personal favorites is the Jack n Coke. Jack Daniels No. 7 brand is the only way to enjoy this brisk and hard hitting cocktail. In a mixed drink or all by itself this whiskey is a smash hit!

Whiskey ranks as my favorite style of liquor and I have a handful of brands that I usually reach for when I make a run to the liquor store. Canada has some very good whiskey and the state of Kentucky is also known for its notable efforts in the whiskey arena. But the place most synonymous with good whiskey is Tennessee and its most prized possession is **Jack Daniels Old No. 7**, a brand of whiskey with almost universal name recognition. **Whiskey Commentary:** Jack Daniels Old No. 7 Tennessee Whiskey is tan/golden in color with a scent that combines slightly burnt grains, alcohol, caramel, and charcoal. This whiskey is medium in body and leaves small legs on the sides of a glass when swirled around. Jack Daniels Old No. 7 has an interesting taste that includes flavors such as assorted cereal grains, charcoal, wood, and rye. There is some sweetness up front, followed by a bitter, slight alcohol burn in the finish which leads to an aftertaste that offers a little bit of vanilla, a little bit of nuttiness, and a little bit of smoked grain. A quick check of the ingredients reveals that Jack Daniels No. 7 is produced using corn, rye, barley malt, and water. It is distilled using a special process where the whiskey is poured over sugar maple charcoal, followed by aging in charred white oak barrels. The final analysis shows an alcohol content of 40 percent (80 proof) and there are about 72 calories in a one ounce (30 ml) serving. Jack Daniels Old No. 7 ranks as one of the most popular and most widely recognized names in the world of distilled spirits and it is a brand I have been enjoying for more than 20 years. What makes Jack Daniels Old No. 7 so special is more than just its taste- it is also a result of the brand's reputation and legacy. Jack Daniels No. 7 has been known for its smoothness and quality for more than one hundred years and it has several awards to prove its worthiness among the world's best whiskies. Jack Daniels won its first Gold Medal at the 1904 St. Louis World's Fair and continued to win international acclaim year after year. The special charcoal mellowing process is the key reason why Jack Daniels is able to achieve such a unique taste and this recipe went unchanged for many years. With the taste, Jack Daniels does offer a unique and flavorful whiskey that has a good deal of complexity and distinction. However, Jack Daniels No. 7 isn't quite as tasty as it was in the past. The reason is because the recipe was altered slightly a few years ago, resulting in a somewhat lighter body and a reduced alcohol level of 40 percent (80 proof). As most any Jack Daniels lover knows, the product used to be distilled, bottled, and sold at 43 percent alcohol (86 proof). This may not seem like a big difference, but these changes have been enough to noticeably impact the taste. The Jack Daniels of old was a little richer in color and body, with a stronger taste of grain, charcoal, and the other flavors that make the whiskey unique. **Bottom Line Viewpoint:** In spite of the changes made to the recipe back in 2004, I am still a fan of Jack Daniels No. 7 Tennessee Whiskey. The Jack of old was worthy of a higher rating, but I still like the new and reduced quality of the new Jack Daniels enough to give it four stars and a recommendation. I agree that it isn't as good as before, but my loyalty to the brand is still strong and I still enjoy a good Jack and Coke or even a shot of Jack every now and then.

For years bourbon drinkers have known when you think Tennessee bourbons you instantly think two letters; **JD**.  **Jack Daniel's Old #7 Brand **is not only a grand old bourbon, but over the years it has become an symbolic American Icon.   Made and distributed in Lynchburg, Tennessee, by founder Jack Daniels, **Jack Daniel's Old #7 Brand **has been featured and acknowledged in countless films, commercials, television shows, major sponsors of rodeos, auto races and just about every rock concert I've attended.  It's distinguished logo accompanied with the "Old # 7 symbol is one of the most recognized labels in bourbons world-wide. When I worked the cattle ranch in Kansas, besides having an abundant supply of coffee it was mandatory to have a couple of bottles of **Jack Daniel's Old #7 Brand **stashed in the Chuck Wagon, for medicinal purposes of course.  It's charcoal filter and smokey taste to the novice palate may be too strong a libation, but over time this smooth, warm amber colored bourbon mellows your taste buds with each sip.  Some of the cowhands would say, *"It's more like an old friend than a bottle of bourbon."* **Jack Daniel's Old #7 Brand **isn't the drink for everyone. If you've had the pleasure of becoming an intimate friend with **Jack Daniel's Old #7 Brand **you have a loyal friend for life.  It won't let you down in flavor and is one heck of a good sippin' whiskey.  In my opinion [my preference] "neat" is the way to honor this Tennessee legend but which ever way you like it **Jack Daniel's Old #7 Brand **is the distinguished icon among bourbons. ** Noteworthy:** The question most folks ask is:* "What does the Old # 7 mean?"*  Some say old number 7 stands for how many years it takes to make a barrel of Jack Daniels.  It could also acknowledge Jeff Arnett (7th Master Distiller)

Jack Daniels is the best out there.  I have tried my share of whiskey and nothing, and I mean, nothing is even close.  It is great for sipping, shots, mixing and over ice.  I have been loyal to this brand for close to 20 years now!      Jack Daniels is smooth and distinctive all at the same time.  The charcoal filtering makes all the difference.  It defines the flavor of this whiskey, making it mellow and full bodied all at the same time.  This is one of the few drinks on the market that that hase multiple layers of flavor.  The aroma of this spirit is wonderful.  Smokey, flowery and not harsh at all.      This whiskey can be mixed with a variety of sodas and other spirits making it a versatile drink also.  One of the most popular drinks around is Jack and Coke.  It is a wonderful combination.  Jack is also an ingredient in many mixed drinks and shots at bars around the country.  I have enjoyed it in whiskey sours, and "speciality" drinks inspired by creative bartenders.      When it comes to sipping this whiskey, my favorite way is at room temperature.  That way I can taste the multiple layers of flavors.  I like to have a chaser of water to clear my palate after a few sips so I can maintain the enjoyment of the whiskey.       Jack Daniels is known for flavor and quality.  I do not mind paying a little more for this brand.  When I do, I know I am getting the quality that I have grown to enjoy.  I also know the makers of this product have not changed the recipie, methods or time involved in creating this whiskey in over 100 years.  It has worked for that long and will keep on working.  This is one product that will be around for more years to come, and the main reason for that is the quality.        I recommend Jack Daniels to anyone who enoys a good, high quality drink.