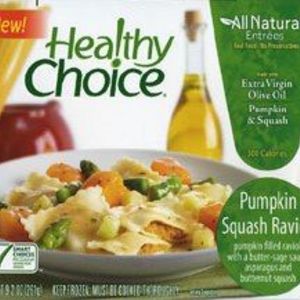 This entree was very tasty, but i just wish this line of foods had more choices for vegetarians- would buy this product again

I just tried Healthy Choice Pumpkin Squash Ravioli for lunch today and I was really impressed. This is a really tasty and satisfying meal, especially considering that it does not include meat! The ravioli was really tender and was stuffed generously with pumpkin. The pumpkin filling had a very good flavor-it was sweet. The raviolis rest on a bed of delicious and tender squash, asparagus, and apple slices. I was really impressed with the amount of vegetables in this dinner. They were of excellent quality-not mushy, or too hard. They were just right. They had a great texture and flavor. I also enjoyed the buttery sage sauce. It was seasoned just right. All of these flavors complemented one another so well. This was a delicious meal!

Healthy Choice Pumpkin Squash Ravioli is one of my favorite Healthy Choice flavors. The filling in the ravioli is delicious as is the sauce that is in. I love the vegetable and apple pieces too. The only problem is that it is only available seasonally and it goes too fast.

I love winter vegetables and I love Green Mill's Butternut Squash Ravioli with asparagus. Healthy Choice's Pumpkin Squash Ravioli seemed like a great way to have a great dish without the extra calories and at a decent price. The entree seems confused if it is supposed to be sweet or savory. The insides of the ravioli are quite sweet with spices like nutmeg and cinnamon but the sauce is salty. There were more fruits and vegetables in the serving than I expected and the ravioli was filling. If you got a bite of each component, it was fairly good, however, there is obviously not enough to do that through the whole meal. The apples by themselves were too sweet. The squash was flavorless. I ate the whole meal, but it was not my favorite. I would try it again if did a "new and improved" with the flavoring.

***Quick View:*** Healthy Choice has just come out with a new line of frozen entrees that they bill as natural. I just tried the **Healthy Choice Pumpkin Squash Ravioli** entree and it was quite good. The sodium level is sky high though which really isn't necessary in a meal like this. Otherwise, I am eager to try the other "natural" varieties.***About Healthy Choice Pumpkin Squash Ravioli***The new line of natural entrees from Healthy Choice says it is made with "real food" and is preservative free among other things.** Healthy Choice Pumpkin Squash Ravioli **contains 300 calories and 6 grams of fat. There is 6 grams of fiber in the meal as well as 9 grams of protein. The somewhat low protein level is due to the fact that there is no meat or dairy in this entree. There are 52 grams of carbs (again due to the veggies and pasta) but only 4 grams of sugars. There is a whopping 600 mg. of sodium which is 25% of an average person's daily recommended intake. That seems quite unnecessary in a somewhat sweet meal such as this.The actual meal has pumpkin stuffed ravioli, chunks of bright orange squash, pieces of tender asparagus, a few apple chunks, and a sage sauce which is decent but nothing special. To me, this meal tasted sweet and definitely NOT salty so I have no idea where the sodium was hiding.I like all the ingredients but I also like cheese which this has none of. Still, once I got past the rather sweet, pumpkin pie-like taste of the ravioli filling, I was really into the meal. I love squash and the chunks were big and not too soft. The asparagus, as well, was tender but not mushy. The ravioli was plump and filled with an almost pumpkin pie like filling which is actually really tasty! I enjoyed the meal but, as with most of these little frozen entrees, I wasn't completely full after eating it. I was, however, satisfied.I like that Healthy Choice is moving toward more natural options and skipping many of the chemicals that aren't needed. I don't have an issue with the high sodium content because I have low blood pressure and actually need to add salt to my diet,. However, for anyone watching their sodium for an reason, **Healthy Choice Pumpkin Squash Ravioli** will force you to really cut back all day on other salt containing items!***My Viewpoint***I really enjoyed **Healthy Choice Pumpkin Squash Ravioli**. It's funky tasting. I am not usually one to like any sort of sweet meal but this was just sweet enough to not turn me off and just tasty enough for me too buy more. I can't wait to try the other three varieties. Oh, and if you have ever had *Lean Cusine's Butternut Squash Ravioli*, don't worry. This meal tastes nothing like that one. You can enjoy both as they are very different in many ways.*** I give this meal 4 stars***. Bad sodium but good taste, texture, and a decent nutritional panel lead me to recommend this.

I'm a huge fan of convenience, and frozen, low-cal lunches are high on my grocery list.  So when I came across the new Healthy Choice options available and on sale, I picked up several.  My first try...Pumpkin Squash Ravioli. **The details:  **This 9.2 oz. entree is low in calories (300) and fat (6 grams)and is made with all natural ingredients and no preservatives - a big plus.  The fiber bar I eat for breakfast (with half the calories) has more fiber...this meal only contains 6 grams.  Brace yourself for the hefty dose of sodium...25% of your daily value (300 grams).  It contains several veggies (asparagus, squash) and apple chunks in the sage butter sauce, probably a serving's worth for your daily value.  **The impression:  **The  sage butter sauce consistency is quite thick and clings well to the ravioli, but it definitely lacks much of a flavor...sage, butter or anything else.  Good luck with the ravioli...it was like trying to cut through a rubber band...chewy and tough.  The filling for the ravioli was exactly like gingerbread cookie dough...not what I was expecting.  If you don't mind the heavy baking spices and odd flavor combination of tart apples, asparagus and pumpkin pie, you may enjoy this entree.  If you prefer a more savory meal, I would recommend the Lean Cuisine Butternut Squash Ravioli instead.

Love the Healthy Choice Natural frozen entree line, I eat them for lunch at least 4 times a week.  Tried the Pumpkin Ravioli, over all I loved the taste except for the extremely sour apples in it.  It ruined the whole thing.  Other than that, you can really taste the pumpkin.  very yummy

I was really excited to try the new **Healthy Choice Pumpkin Squash Ravioli **because I am a huge fan of frozen meals, especially when they are good for you too.  The package states that each entree is only 300 calories, so it is a great way to have pasta, but also stay within your perfect portion range.  This meal has a lot of flavor and I like it because it is vegetarian.  The pasta microwaved to a great texture that was soft, but not chewy.  It only takes a few minutes in the microwave and you have a hot and delicious meal.  The ravioli are pillows of pasta and have a great pumpkin sauce that is a little sweet and spicy.  I like the fresh spices and the sweet pumpkin taste.  The pasta mix also has a few chunks of squash and bits of fresh asparagus.  I would like more veggies in this, but it is good with a side salad, or I add my own to bulk up the meal without adding more fat and excess calories.  This is a great meal and is perfect for those who love pasta but are watching their weight.

HEALTHY CHOICE ALL NATURAL ENTREES Pumpkin Squash Ravioli This is a new flavor from Healthy Choice, according to the box, it contains "real food" and "no preservatives". This entree is pumpkin filled ravioli in a butter-sage sauce, with bits of asparagus and pieces of butternut squash. I really liked the ravioli, and the sauce was flavored very nicely too, the taste reminded me of pumpkin pie spices. The asparagus and squash pieces were a nice size and a good texture also, not mushy at all. It made a very filling lunch for me, and took less than 4 minutes to cook in the microwave. Each entree is 300 calories, 6g fat, 600mg sodium, 52g carbs, 6g fiber, 9g protein It contains 30% of the RDA for grains, and 20% RDA for vegetables Weight Watchers Points= 6