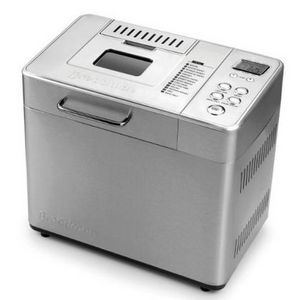 This is my third bread maker. I wore the other two out. I spent a lot of time reviewing the different bread makers available and the research was mostly online because so few stores carry them any longer. This machine is so much lighter than my previous two bread makers. Does that make a difference? Yes, if you don't plan to leave it on the counter. I do leave it out during the fall and winter. I don't tend to use it much in the summer. Let's talk about the bread it makes. DELICIOUS!!! Nicely shaped loaves, good texture, accomodates so many different types of bread. And let's talk about the appliance itself. I would love the on/off button with the other controls. I would love to have the menu settings in the instruction manual as well as on top of the lid. I just shot a picture of the settings, printed it and added it to the book. I have never liked the bucket. My last machine had a dorr that opened from the front and a loaf shaped pan. It was so easy to put in, take out. I love the collapsing knead tool. It is a pain to get the bread out of this bucket. Come prepared with a spatula, knife, etc. If you don't take the bread out of the machine when the timer goes off, it will keep the bread warm which I like. The macine is crazy noisy. Don't make bread if the baby is sleeping. Even my dogs were disturbed by the noise. Are you short? Well, I was standing on tip toe (I am 5'4) to read the controls. They are not back lit. They need to be. The add in dispenser for fruit, nuts, is a good feature. I like the quick cycle. The crust color is only available for certain bread types. The instruction book really needs to be more complete. You can practically open the box and put the bread maker to use without any instructions if you have previous experience with a bread maker, but if you are using a bread maker for the first time, you might like instructions that are written a little more logically. Durability I have had this for just over a month at this point.

Fresh bread makes any meal better and specialty stores can sometimes be counted on for producing loaves of creative bread products for a reasonable price. However, bread that is even fresher is often the best of all and this is where the small appliance known as a bread maker can make all the difference. The bread machine used in my home at the moment is the **Breadman BK1060S Two Pound Professional Bread Maker**. Let's take a closer look: **Bread Maker Commentary:** ** ** The Breadman BK1060S Two Pound Professional Bread Maker is a stainless steel appliance that can be used to make several different types of bread, using one of the fourteen preset options. The Breadman can also be used to make dough, or jam and it is controlled by pressing buttons on the top of the machine. There is a guide right on top of the machine that lists out the fourteen different options (white, wheat, French, wheat- rapid, artisan dough, etc) so you don't need to worry that you may forget. Along with the type of bread desired, you can also select among light, medium, or dark crust as well as specifiy 1 pound, 1.5 pound, or 2 pound loaves. It has an automatic fruit and nut dispenser, for added convenience, and it comes complete with a collapsable measuring cup, measuring spoon, and recipe book. Plenty of manufacturers offer bread makers and Breadman itself offers more than a dozen different machines. But this, the Breadman BK1060S Two Pound Professional Bread Maker, is a little different from others in several ways. First, it has a nice, professional appearance. I like the metal construction because it matches the other small appliances in my kitchen and it looks like a product to be taken seriously. Second, this bread maker includes extra features not offered by the bread makers from my past. The fruit and nut dispenser is a nice idea because it dispenses the items into the bread at the right time so that you don't have to remember to do it yourself. I also like having fourteen different settings and I like that the machine can be programmed to start the bread making process up to fifteen hours ahead of time. You can set the machine, go to work for the day, and come home to a fresh loaf of bread, ready to enjoy. Extra features are nice, but what matters most with a bread maker is the quality of the finished product. Here, my feelings are mixed but they are improved. My first experience with this bread machine was negative. The bread came out of the machine as a compressed block. We followed one of the recipes in the included book, but it didn't turn out the way it should have. The problem, I soon discovered, was that the recipe contained a few typos. The bread was ruined, and I later realized it was because there wasn't enough liquid in mixture. The recipe had an error and once I started to look at other recipes, I found that several had errors on the ingredient list. It is obvious when a recipe calls for one tablespoon of raisins to make oatmeal raisin bread that something is wrong. Buyers of this bread maker need to beware of these mistakes. Fortunately, my more recent attempts with this bread maker have resulted in good, fresh loaves of bread and my confidence in the machine has improved. However, there are still a few peculiar things about this bread machine that need to be noted. One is that the freshly baked loaf of bread, once removed, often has a patch of flour on one of the corners. This is because the paddle doesn't always mix the ingredients as well as it should and you end up with a flour- coated corner. Another potential issue is the metal paddle that stirs the bread- it often pops out with the bread and lodges itself in the bottom of the loaf. Looking at other potential issues, the Breadman BK1060S Two Pound Professional Bread Maker makes unusual sounds that could worry first- time users. You will think something is wrong and want to reset, but you have to resist the temptation. Also, the bread maker will sometimes go several minutes without making any sound, which, again, will make you think something is wrong. I have found that this is perfectly normal and you should just let the machine continue without interruption. **Bottom- Line Viewpoint:** Bread mchines are nice and the Breadman BK1060S Two Pound Professional Bread Maker is a good small appliance that makes a nice loaf of bread. I am still a little annoyed by the mistakes in the recipe book and I will never forget the failed attempt at making that first loaf. But overall, this Breadman machine is a good appliance that works fine if left to its own devices. Don't be tempted to reset the machine or mess with the settings during a cycle. Let it runs its course and enjoy the final result: A delicious hot, fresh loaf of bread, made to your specifications. Stability While in Use Makes odd noises, but otherwise does its own thing and makes the bread Performance Usually good results, but a few loaves of bread were ruined Ease of Use Has special compartments for added ingredients. Durability Stainless steel made to last

My husband and I received this bread machine as a Christmas gift from my in-laws last year. Since then, we have made several different kinds of bread in it, most of which have turned out perfectly. The bread comes out evenly baked and rarely has air bubbles. At first, it was difficult to get the paddle to stay attached to the peg, but we eventually figured out how to do so and we haven't had any issues since. It is fairly noisy, but not so much as a dishwasher. Make sure to put this machine on a stable surface, however. Appliance or baker's racks are not a good fit, as the machine produces a lot of vibrations. The controls are easy to use, I have had no issues with the fit of the lid, and the fruit & nut dispenser works perfectly. I recommend this machine.