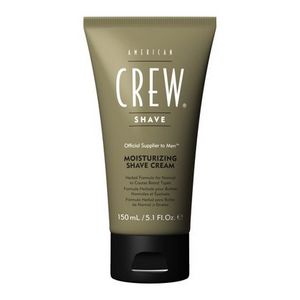 Most shaving cream is similar in appearance and performance and most all shaving creams can be categorized under the headings of either foam or gel. Gels are superior to foam because they lubricate and soften better, but there are a few other types of shaving preparation besides gel and foam and one of them is **American Crew Moisturizing Shave Cream**, a shave product made for men.  ** ** **Shaving Cream Commentary:** ** ** American Crew Moisturizing Shave Cream is white shaving material with a scent that combines menthol, herbs, and mint. This shaving material is labeled as shave cream, but it is different. It is very thick and paste- like, with a consistency that places it somewhere between tootpaste and suntan lotion. It is specially formulated for coarse beards with a special conditioning formula that contains added antioxidants, aloe, and avocado oil. These ingredients moisturize the skin and make it easier for a razor blade to glide across with little irritation.     I have tried many different American Crew products but I had not tried the American Crew Moisturizing Shave Cream until recently. Opening up the package, my first impression was one of odd confusion and apprehension. First, the product is sold in a plastic squeeze tube, similar to toothpaste or certain shampoos. This is unusual, but what is even more odd is the scent and the feeling as it touches your skin. Most men's shaving creams have a scent that is masculine and cologne- like. But this product smells instead like an herbal mint combination- similar to a gourmet brand of tea. It isn't a bad scent, but its uniqueness made me wonder whether this product would perform as expected.   Spreading the shaving paste/lotion on my skin, I discovered that American Crew Moisturizing Shave Cream is different from other shaving preparation in two main areas: The way it makes your skin feel and the way it spreads on the skin. This product producs a cooling sensation as it touches the skin and, again, this made me feel a little apprehensive because heat is an aid to shaving and that is the reason why you always use very warm water as you shave. A feeling of cold seemed to go against conventional wisdom. The same is true of the way it spreads on the skin. Ordinary shaving gels and foams tend to expand as you spread and they leave a puffy layer of foam on the skin. With American Crew Moisturizing Shave Cream, the product lies completely flat against the skin, giving your face a look similar to that of a person who has spread a mud mask on their face.   American Crew Moisturizing Shave Cream is certainly unique thus far, but what about its shaving performance? Well, I can say that use of this product does result in a very good, close, comfortable shave. Even though the cool feeling is present and the layer of gel/paste is very thin, the shave is still comfortable. Not only that, but the herbs, aloe, and other agents do, indeed, make your skin feel more moisturized. American Crew Moisturizing Shave Cream performs its lubrication/moisturizing duties so well, you don't need a heavy layer on your face. Your skin is left feeling moisturized and refreshed.   **Bottom Line Viewpoint:** American Crew Moisturizing Shave Cream is certainly different from other shaving products, both in scent and in texture. However, it offers an effective means to remove unwanted hair and even though I don't think I would use this on a regular basis due to its high cost, I can see how this product would be very well liked by many men. Its unusual characteristics set it apart from other shaving products on the market, giving it a personality all its own.