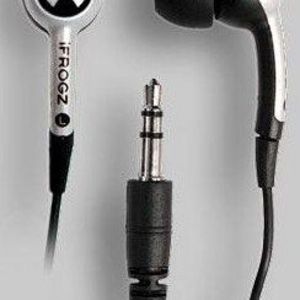 I go through head phones real quick- I am rough on them. These are an ok pair for a person like me and at the price you could even have a back up pair. I am happy with the purchase and would do the same again. Not the best but not the worst either.

These are awesome!! They block out plenty of background noise and are perfect for on the computer or on your mp3 player at the gym! The thing I love the most about them is that when my husband is using them, I can't hear his music that is playing, that is my number one pet peeve with other headphones. These are amazing!!

I wasn't looking for a new pair of headphones. As described in an earlier review, I had damaged my iPhone headphones with them falling into a glass of water, and bought a cheap temporary replacement, then had my iPhone suicide jump out of my purse and into the toilet to ruin that with water damage, and got a new pair of iPhone headphones with the replacement phone. I prefer the Apple headphones because of the little remote that allows me to switch songs, play, pause, change the volume, and use it as a microphone. However, I had a nice little surprise getting these iFrogz EarPollution Plugz and decided to see if I would like them more than the cheap temporary ones. I had done some promotion for a TV outlet, and they gave me a nice little gift box with assorted promotional items in there. One of the items was this set of headphones. They came in a cute little carrying case and had three differently sized earbud covers. Being that the cheap temporary ones didn't fit completely perfectly, I thought these would be a nice alternative. As far as sound quality, and blocking out other noise, these iFrogz headphones trump both the Apple headphones and the cheap Sony pair I bought. I'm using the middle sized earbud covers, and they fit so snugly inside my ear that it's almost off-putting. I feel like these little covers are going to come off inside my ear, although that's a completely irrational thought. It just feels like that. It also seems weird to have so much of the sound blocked out by these. There is a little noise that leaks through the barrier, but not much. Mr. Snorer cannot be heard from at all with these on. They come in different colors paired with black, and I was given a pair in lime. Interestingly enough, checking into this iFrogz pair of headphones, they are right around the same price as the Sony headphones I bought, but I find the iFrogz to be more superior in quality, both for what is blocked out and the the sound quality coming in. With the little carrying pouch, I can store this pair, along with the extra earbud covers, and my other cheaper pair. For regular every day/every night use, I much prefer the Apple Headphones because of the remote, but there are a few nights when I prefer the iFrogz. They're reserved for those nights where i just want to block out everything and get a good sleep.