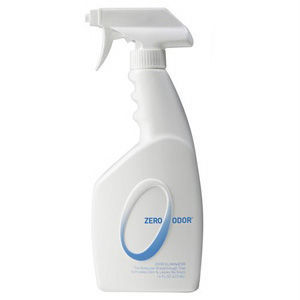 My house smells of cigarette smoke. I try to sty in the front room so the smell will not travel to other rooms but it does. My daughter hates visiting because of the cigarettes and I can smell it too. I bought Zero Odor and have used it several times throughout my home. Now when I walk in from being away for a while, I do not smell the cigarette odor. This product is the best I have ever used. It does not cover the odors. It eliminates them. I would recommend this to anyone.

SAW REVIEWS THAT BESIDES GETTING RID OF CAT LITTER ODOR, WAS (AMONG OTHER STINKY THINGS) WAS GOOD TO SPRAY INSIDE OF WORKOUT SHOES. I'M HERE TO TELL YOU THAT WHEN YOU SPRAY THIS IN YOUR SHOES, IT WILL SMEALL LIKE STINKY FEET...WITH A HINT OF BLEACH!!

It works on litter odor fine, however after using it, I noticed my cat had small sores on his neck and back area. The vet said it was an allergic reaction. This is the only new thing to his environment, so I quit using it. Check your cats please! It was just a fluke I felt these sores. If your cat has thick fur, you might not even notice it.

I have a dog and three cats. All of them stay indoors for most of the day. My dog had a spot on my living room hardwood floor that was the main area of his accidents. I mopped, scrubbed, put vinegar on the spot, etc. Nothing would take that urine odor away. I finally resorted to stripping the finish from the floor and discovered that the odor had soaked under the finish. I did an internet search to find the best pet odor eliminator and Zero Odor kept coming up in my search. So I bought a bottle. It was pricey, so I was a little hesitant to spend money on something that might not work, but every other product had not done the trick. To my complete surprise, Zero Odor WORKED. It took a few applications, but eventually the odor completely disappeared. I tried it again when my cat had an accident on the carpet. Same thing...it took more than one application, but it eventually took the odor away.

I have a pug that I, unfortunately, have been completely able to house train. Over the years, I have tried just about every brand of odor eliminators on the market. None have worked as well as Zero Odor Spray. I was able to eliminate urine odors that I have been working on for months.

I purchased this product for my cat's litter box. My "buddy" received the worst allegic reaction that the vet had to come to my home and inject him to alleviate his itching and biting. He is still suffering. I threw the three bottle away! Be careful

I had a real problem! I had my daughter's new couch in my home and one of my precious pets had an accident on it. After I had removed the accident, the odor remained! Every time anyone would sit on the couch, the odor was horrible! I saw this product advertised, called Zero odor. It claimed to completely eliminate strong odors, even cat odors. I thought it was worth a try because my daughter's new couch is useless like this. I bought the Zero Odor. I was sort of skeptical, because I had never seen the product in action. I sprayed the product on the new couch, I spayed a lot because the damaging odor was deep in the couch. I smelled what they called an identifying odor as it was busy neutralizing the odor. Now, this odor is not an unpleasant odor. I allowed the couch to dry, and as they suggested it may take two treatments. The odor was much less, but it was still there, so I tried it one more time. After this second treatment you can get your nose right on the spot on the couch and not smell a thing! I feel people need to know the great things that can be accomplished with Zero Odor!

I purchased Zero Odor specifically to use in my cat's litter pan. Unfortunately, my cat's litter pan odor even beats Zero Odor. This product is pricey and not available to me locally. I had to order online and the shipping fees were outrageous because of the weight. On the positive side: it makes a decent general room freshener. Unlike another reviewer, I don't find that it smells like chlorine at all. I would label it as a light fresh scent, not floral, but rather non-descript. The scent dissipates quickly, leaving just fresher air. I would purchase Zero Odor again as a general freshener if it was available to me locally.

Zero Odor is the BEST pet odor elimination every invented.  I have tried Febreze and others.  Zero Odor really works!  Tried it on cat liter, carpet, dog bed, car...what can I say 5 out of 5 every time.  Please keep making this product.  But when will you be in more stores?  Can I buy a bulk product like in gallons?

A few years ago a friend of mine ordered Zero Odor, she told me she got it after seeing whoopie Goldburg giving it rave reviews.  She was a heavy smoker and you could tell the moment you walked in the door of her home.  Well i went to visit a few weeks later, i walked in and the first thing i said was wow did you quit smoking or did you take up smoking outside?  To my amazement she reminded me about Zero Odor! OMG i was sold right then and there.  I had Just gotten a new puppy and house breaking was great.  Then i moved to a new apartment and all i could smell was cat urin...gross! Well after many shampoos i thought i got it all...ya right. Well my darling puppy smelled were the cat had gone and just figured oh nice place for me to.  WRONG i had to put a stop to it right away, so i went and ordered Zero Odor, it was a little more than i wanted to spend but it came with a 30 day money back. so what the heck.  Well it worked!!! I could not believe it, i am so thrilled after trying many products.  A must have, for anyone with pets, smokers, ot people who have a bathroom...lol.  You will not be dissapointed.  i got the 2 big bottles and 2 small ones i carry one with me at all times, for the car and those fishing trips!