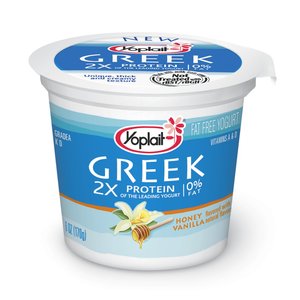 I've been eating Yoplait Greek yogurt for several years now. When I first discovered it I was pleased by the amount of fruit on the bottom. For the last several months the amount of fruit has been drastically reduced. What a disappointment.It still tastes good but I do miss the fruit an am looking for another product that has more fruit in it.

I have never been a huge fan of greek yogurt. I usually stuck with regular yogurt and sometimes whipped. Then my sister had some at her house and it was a different brand and it wasn't that bad, but nothing worth buying. Then I seen a commerical for the Yoplait greek yogurt and it looked really good. The next time I went shopping I came across Yoplait greek and I was suprised at how many flavors they had and how good it looked. I tried a few different flavors like the raspberry, caramel, and lemon meringue. I tried all of them within a couple days and I was thinking, "these are amazing and why haven't I had these sooner!" Compared to the other brand I tried, these were creamy and the flavor is outstanding. There are so many flavors to choose from and I haven't had one yet that I didn't like. I usually wouldn't eat pineapple in yogurt, but the texture of it with the Greek yogurt is out of this world. I am now a huge fan of Greek yogurt, but only Yoplait greek so far. I'm very glad I gave it a try because it is a great snack, very filling, and good for me and my diet. I'll be adding this to my weekly shopping list. Definitely give it a try even if you think you wouldn't be a fan. Great product and inexpensive.

I have been enjoying yoplait greek 100 for over a year now. Then you come out with the whip yogurt. Not interested but now you have changed the one I enjoyed to be like the whip. WHY!!!! May have to look for another favorite this is very disappointing. I like the fruit left at the bottom.

I just opened the Blueberry version of Yoplait Greek Yogurt and it is not very pleasant; it is not as thick and creamy as other Greek yogurts and the blueberry taste is anything but similar to blueberries. I now understand why it was on sale and I would not buy this again.

I'm a huge fan of Greek yogurt, so I am always excited to try out a different ones that I haven't ate before. I used to eat the regular Yoplait yogurts, and enjoyed them so I though I would like the Yoplait Greek yogurt as well. Although it did taste really good, it didn't remind me of or tasted the same as other Greek yogurts I've tried. It didn't have the same thickness or consistency. I will say that even though it didn't have the same consistency or same flavor, it does have a similar nutritional value as other Greek yogurts. It only has 140 calories, 50 mg sodium, 18 g sugar, 11 g protein, vitamin a 4%, calcium 10%, and vitamin d 20%. So it is really healthy for you. It has less sugar, and more protein in it them regular yogurt does. The ingredients in it aren't bad either. It is made from pastuerized and cultured grade a nonfat milk, and a fruit blend. Overall I liked it. It was a lot better and healthier for me then oter cheap yogurts have been, and it has a great flavor to it. Flavor/Taste It was good for a thicker regular yogurt, but to me it didn't have the same taste of flavor like a regular Greek yogurt. It was thick, but didn't have the same thickness or taste that I am used to with otehr Greek yogurts. The flavors they have are absolutely delicious, and I would say that I really did enjoy this yogurt though. Variety The Yoplait Greek yogurt comes in a variety of different flavors such as coconut, lemon meringue, key lime, blueberry, tangerine, caramel, pineapple, pina colada, and much more. Consistency It doesn't have the same consistency or thickness that I have tasted with other Greek yogurts. It is a thick yogurt, but it is thickened with gelatin and other Greek yogurts don't even have gelatin in them. Only most regular yogurts have geltin. Convenience They are convenient as a snack to bring along with me anywhere, and all super markets carry Yoplait so they are easy to find in stores as well.

I have to give this Greek yogurt a 5 out of 10 and not because it's so terrible. The trouble I've found with this brand is that I can buy a case of them and half of them will be great and the other half will be horrible. I've noticed that sometimes they are thick and creamy and other times they are chunky. Sometimes I get a sweet, delicious Greek yogurt and other times I get chunky tart yogurt that isn't fit for smoothies or anything else. I've bought this a few times and the fruit was sweet and fresh tasting and other times I've bought it and the fruit was sunk to the bottom in syrup and looked like strawberry jelly on the bottom and wasn't fit to eat. It really depends with this particular Greek yogurt. I haven't had that trouble out of any other Yoplait products, only Greek Yogurt. Greek yogurt is special in and of itself and I buy it for the protein but I've switched over to Chobani because the consistency is always the same and they never fail to meet my expectations from cup to cup. Flavor/Taste If you're lucky enough to get a good container, this has a great taste. I've gotten some that were sweet, fresh, and had juicy fruit but sometimes I get one that is tart, chunky, and has slimy fruit. The dates are always good but the consistency is not. Variety They do offer tons of flavors and variety. Consistency They are not consisten at all. I've gotten a case before that had some that was thick, some chunky, some creamy. I've opened one with good fruit and one with slimy fruit. Sometimes the yogurt is sweet and other times tart. I just don't understand because the dates are always good but it's as if they are not consistent at their factory. Convenience Theyre convenient to buy in a case but you don't always know what to expect if you purchase the Greek yogurt. It's disappointing.

I've been a fan of Greek yogurt for years and the Yoplait brand had so far pleased me with their range of tasty yogurt varieties so when I tried the Yoplait Greek yogurt I was surprised to see that this product offered twice the protein of leading yogurt's, fat free, gluten free, no artificial flavours, and no artificial sweeteners. It makes an easy, quick healthy snack alternative for meals and I do not have to worry about the calories since the sugar content isn't that high. It's available in almost all the grocery stores in the cold / freezer section and the price is a bargain. Good quality tasting Greek yogurt, trust worthy brand, easy to prepare for meals, huge surplus amount of protein that makes it perfect for a healthy snack and is affordable; highly recommend trying this high protein yogurt as you will be satisfied with what the Yoplait brand promises. It's a great choice for those that want to try or already enjoy Greek yogurt.

I bought Yoplait Greek Yogurt just one time and did not like it. I never bought it again, nor do I ever plan on buying it again. I really hate to give any product a bad review, but I had to do it with this one. Yoplait Greek Yogurt just does not taste good. It does not taste like what Greek yogurt should taste like. It had a sour flavor to it which my family and I did not appreciate very much. The texture of this yogurt is very watery. It is not thick like Greek yogurt is supposed to be. At least for the cup I bought, it was like that. I purchased Yoplait Greek Yogurt once so I can try it but my family and I did not like it at all. We did not even finish the cup we bought. I had to throw it away. I was very surprised because we very much love the regular yogurt products from Yoplait, but none of us liked this one. Maybe Yoplait should stick with making flavored yogurt and not Greek yogurt.

We do not buy Greek yogurt very often, primarily because it is pretty expensive. But on the rare occasions when we do buy it, Yoplait is the normal brand that we choose to turn to. Yoplait combines a good quality yogurt with a relatively low price. It definitely has a higher quality and better taste than the cheapest off-brands. On the other hand, it isn't quite as good as the most expensive brands. But the drop off in price from those expensive brands is more than the drop off in quality. Like most Greek yogurts, this one is high in fat, but it is supposed to be a healthier fat that is good for our bodies. It is also very high in protein, having 14-17 grams of protein per serving (depending on the specific flavor). It has a rich, strong taste that is very good. But it is also rich enough that I prefer to stick pretty close to a single serving at a time. Any more than that turns out to be too rich and unpleasant.

I love yogurt. I have tried several yogurt brands and my favorite yogurt brand has always been Yoplait. During my most recent pregnancy, I experimented with different brands of Greek Yogurt as a healthier option. Honestly, I was expecting to like the Yoplait Greek Yogurt most because of the well trusted brand. However, this wasn't the case. In my opinion, the Yoplait Greek Yogurt tasted more sour than other well known brands. I know that plain greek yogurt is suppose to taste that way, but it was intensified. The texture of the yogurt was thick like a greek yogurt should be, I had no problems with that. I did find that the Yoplait Greek Yogurt went well with Mexican food. It was great in burritos, enchiladas and on top of nachos. I would probably say that it makes for the very best substitute for sour cream as a healthier option! Also, this yogurt is packed with protein and would be great for a diet meal. I would recommend this to anyone who enjoys that sour taste in greek yogurt or for anyone who is looking for a sour cream substitute!