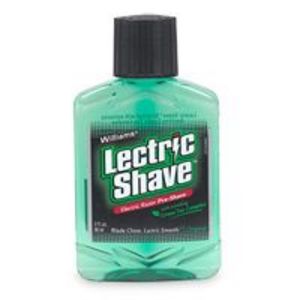 This product has been around a very long time and is very effective in preparing the skin to remove hairs using an electric razor. Works much better than water. Although meant for a man, I use this product on my legs. It definitely helps make the razor go across the skin smoothly and seems to open the pores so the hair is removed more deeply. I don't have to shave as often and skin is very smooth. My biggest complaint is that there is only 1 type of this product and the manufacturer completely disregarded the feminine use. It's expensive for what it is,, never a coupon or manufacturer reward program. I left a suggestion with the company for better scents but they didn't listen. Bottom line: if you're a man you'll love it, a women you'll like the results but not likely the scent.

As a guy who has periodically alternated between the neat-and-clean shaven look and the Ernest Hemingway-wannabe bearded "writer" one, I have used many shaving products ever since my first unwelcome whisker appeared on my face when I was 16 years old. At first, shaving was a breeze. All I needed to do was use my first Norelco electric shaver and do a quick pass on the cluster of whiskers that popped up, dandelion-like, on my chin.  Later, though, my beard got more developed and thicker (especially in my cheek and neck areas), and I had to figure out which method of shaving worked best for me even when I let my beard grow to look either older or more intellectual.  (I still needed to shave parts of my face then, or else I ended up looking like Lon Chaney, Jr. in *The Wolfman.*) Now, although I use both the "wet" (disposable razor-and-shaving cream) and "dry" (electric razor-only) methods of facial hair removal, I've always leaned toward the dry one because I don't like the inevitable nicks and cuts I inflict upon my face and especially my neck when I use my Gillette Atra and Barbasol shaving cream. I actually started shaving with an electric razor partly because I was squeamish about those nicks and cuts, but I've learned to shave both ways because it's not a very pleasant thing when the power goes out for several days or even weeks and one can't get rid of a prickly, itchy beard in the wake of a hurricane.To offset the one advantage "wet shaving" has over the use of electric razors - closeness of a shave - Combe-owned J. Williams, the company that makes Aqua Velva and Brylcreem, has been making Williams' Lectric Shave since at least the 1950s.Lectric Shave Original Formula is a green alcohol-based lotion that's mixed with water, camellia sinensis leaf extract (green tea, I assume), and a bunch of other ingredients (fragrance, isopropyl myristate and other stuff) that prep the face and especially facial hairs for the "lift and cut" action of an electric razor.What Lectric Shave says it does: (from the bottle) - Stands whiskers up stiff, to help your razor shave shockingly close - Lets your razor glide for less friction and skin irritation - Gives you a closer, more comfortable shave and smoother skin. This product, which can be found in most stores where men's grooming products are sold as well as online, used to come in glass 7-ounce bottles, but now is bottled in similarly-shaped plastic ones. The original formula is emerald green and has a crisp, almost Aqua Velva-like scent.How to use: Basically, you splash some of the Lectric Shave lotion into the palm of your hand and apply it to your face and neck areas, wait about 15 seconds for it to dry, and shave with your electric razor of choice. If you miss a tough to reach spot, reapply as needed, shave as needed, then rinse. Couldn't be simpler, right**?My Viewpoint**: Though I can't really swear that Lectric Shave actually makes for a shave that's 52% closer than either a "wet" shave or using an electric razor without it, I can say that it does help. I've often had to use my Norelcos without Lectric Shave, and while they do get the job done, it takes longer to get the coarser chin and neck hairs when I don't use the pre-shave.Also, when I have not used Lectric Shave, my face and neck get irritated; people can tell right away that I've just shaved because my skin will look as though I had gotten a mild case of sunburn (and it will feel like it, too). With Lectric Shave, there's still some irritation where my skin is sensitive, but there's little to no redness at all, and if I take a shower right after I shave, there's no sign of irritation at all....just clean, smooth skin.