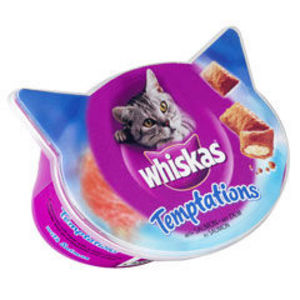 Very easy to open and very convenient. My cats love to be fed at 5am and 6pm and sometimes my eyes are barely open and they are already waiting for breakfast so this makes it super easy to feed them no matter how tired I am. Yes they literally wake me at 5am on the dot for breakfast LOL So far zero issues with this food at all. I have struggled to find them good quality foods that dont make them have an upset stomach and dont make them throw up and so far they are doing very well on this with zero problems. I am a very pleased pet owner and happy I gave this a try.

My cats are a tiny bit of treat snobs so I was't sure how they'd react to these Whiskas Temptations Treats but I figured they were close enough to some treats that they already had that it was worth a gamble. I'm glad I tried them, and so are my cats! I don't feed these too often since the flavorz my cats prefer are actually rather difficult to find in my surrounding area, but when I do find them I stock up. My cats love the crunchy exterior and the soft interior. I like that they're just crunchy enough that they're not outright hard but just have a bit of a crunch (like nicely toasted bread). The interior is soft but not chewy, which is also good. We've tried several of the flavors but the all time favorites are the new ones with "cheezy" middles. They like the Beef & Cheese and the Tuna & Cheese, but the hands down favorite is the Chicken & Cheese. They love anything that involves cheese! They love the plain flavors as well, but the cheese varieties are the best.

My cat absolutely loves temptations by Whiskas. I usually buy a few different types of treats from different brands at a time to to see what he likes, but I always have at least two bags of temptations in the house. I would say if your cat is on a wet food diet in particular (like mine is), these really are considered a treat since it's their only source of dry food. Each treat is under two calories, so that is also a plus. There is a ton of flavors as well as types to choose from (natural, tarter control, mixed etc). Occasionally I will buy the larger bag, but most of the time I grab a few regular sized bags so I can choose a few at a time and have some variety in the house. Although prices always vary slightly depending on where you go, these are very reasonably priced at most stores. My cat has loved temptations since he was a kitten, and I will continue to buy them as long as Whiskas produces them.

Whiskas Temptations is probably one of my cats' favorite treats. It's a crunchy square on the outside and has a creamy middle, which is probably why mine love it so much! When it's snack time, I'll give them a few pieces each and they devour them in seconds. Sometimes, I think they swallow them whole...lol! I always have a bag or two in the pantry and boy do they know it! :)

When I first got my Cat, November of last year, I had to find something that I could reward her for, spoil her with, just something to make her happy, because I, myself LOVE cats. I went to the store that day I got her and I was cruising through the treat section in my local WalMart, and I noticed the Whiskas Treats. I have always heard how other people cats loved them, and I figured mine would, to!  I decided to buy them. I also have another cat at home, and also a dog. I had never used anything for my other cat, because he is one of the pickiest eating cats you will ever hear of. & of course my Boston Terrier already had it's own treats, that took me forever to find, because he IS the most picky eating dog you will ever here of. When I got home, I couldn't wait to try them out. I pulled out the bag, and of course, my dog came running. I decided to just try them out on him, first, because I was practically positive that he would just stick his snobby nose up at them. I put it down in front of him, and was amazed when he willingly ate it, and wanted MORE! I gave him one more, and went to find Mr. Puff and My new Cat, Bush. (by the way, my Boston Terrier's name is Kong.) When I found them both, playing in the Big Castle thing I had got Mr. Puff a while back, I put one in front of Mr. Puff, and considering I knew he was really picky, as well, I figured he wouldn't want it, although if my dog liked it, I still had hope. Unfortunately, Mr. Puff snubbed me, and did not want the Treat. It was really no suprise, but I was now scared that my new Kitty Cat wouldn't like them. I bent over to give one to him, and he started to sniff my hand, I put my hand at his reach, and he gobbled the treat down like there was nothing there. I put two more, and he enjoyed them, as well! I was extremely happy, although Mr. Puff still won't eat it. But I would DEFINITELY recommend this product, even for a picky dog! That as the new snack for Kong, and Bush, I was very proud of myself, for picking so wisely.  POST SCRIPT: It turns out that every once in a while, Mr. Puff WILL eat Whiskas Tempations. Not all the time, but he does now eat a little here and there.

**I feed these treats to my cats every day. From the youngest (5 mos.), to the oldest (1-1/2), they never** **turn it down. Whiskas Temptations tuna flavor was the last food my cat Sharon ate, before the visit** **to the vet. He enjoyed these treats since they were first introduced. I know I'll keep on buying them.** **Thanks for a great product !.**

My spoiled rotten cat, Penelope gets to try a new brand of treats once a month. I do it so she doesnt get bored, because she tend to get sick of the same treats everyday. I bought these because her "new" favorite was out of stock at the store. Oh my! Was this a hit! She has been on a kick with these, especially the dairy flavored. She will hang around the kitchen expecting them. As I'm cooking dinner every night, shes at my feet buttering me up for them. She's never done that before! She knows where the treats are in this house, but now will jump on the counter top and SHOW you where they are! Usually by now she'll show little interest, because it's become old hat to this princess. But for over two month, she's still been going crazy for these. So, now instead of buying a bag once a week, I buy two just incase we run out, I don't think I could take that sad face. I am going to start trying other flavors and see if she takes to them as well.

I've tried other cat treats with my older cat and she never really liked them.  She can be picky.  I tried several other brands and textures and then I picked up a bag of Temptations.  She absolutely loves them!  One shake of the bag she knows what's coming.  When I put them in her bowl, she will just eat the treats sometimes and move her food around until all her treats are gone.  If she had it her way, she would just live off of these treats.  With our new cat, she can eat anything and she had the same reaction.  Since these are treats are treats, I only give these out when I'm leaving the house for work or for longer than four hours.  There are a variety of flavors and some for specific things that I am concerned about for my cat, like her teeth.  The cost is worth it but I do wish they sold these in bulk form.  From time to time you may find coupons for these treats or deals at your local supermarket.

I have a cat that is extremely fussy.  She needs to have her food varied, but the problem is, she doesn't like very many cat foods.  I have tried all the treats out there, and she likes a few different brands. Temptations is the brand I can count on for her to continue to eat. She "asks" for them every night. I mix other brands in with them. Sometimes she'll eat the others, sometimes not. Even though my cat likes mostly fish flavored cat food, she will eat the different flavors of Temptations. Beef, chicken, dairy, etc.  often see other people buying Temptations when I am in the cat food isle of the supermarket.  I think the price is reasonable for the size of the pouches and the quality of the product.

What can I say about the Whiskas Temptations treats that my cat hasn't already? He is nuts over these things. He used to eat just about any treat you gave him but I had coupons for these one day so I bought him some and that was the start of the "If I don't get Temptations you get NOTHING from me!" era! He was a ferral cat that I adopted from the shelter who wouldn't let you touch him and barely came out of hiding for food. When I first saw him he was in the back of the cage all hunched up and he would hiss at anyone who tried to talk to him and I thought to myself what a beautful challenge. I am disabled so I have time to spend with them. Well, he too developed a fondness for these treats after days of throwing them under the bed to him. He is now at the point where he will only eat this brand and trust me he would eat them bu the bowlfulf if he could. I taught him all sorts of tricks with these treats because he was so eager to get them he would do anything I tried to teach him. He has come so very far from that lil boy who hissed and scratched anyone and anything he could get to. He now is such a lovey, kissy boy who sits up, speaks, sits, lays down, rolls over, stretches on command and waves goodbye (and they say you can't teach a cat like a dog!!! Wrong...they will only learn what THEY want!) This company is so concerned with the well being of our pets and we do them right by purchasing this product. More than that we do right by our pets by feeding them to our "loving friends" as they deserve the best just as we do. I sleep a little better knowing my boy is well cared for and that starts with how they are loved and fed. You can always find coupons for this product if not on the coupon sites then if you go to their website you can usually get them. They are priced pretty competitively and they provide a wide selection to choose from and now they have even bigger bags to make it more convenient.They even have dental, hairball control, and indoor cat treats. I know if you try them your cats (and dogs too!) will love them and they will love you even more for choosing them! Just shake the bag...the rest is history!