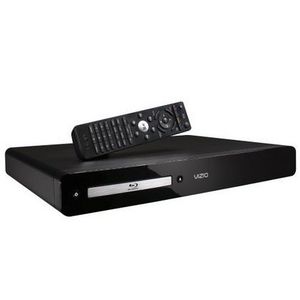 This blu-ray player is OK for the money. It's cheaper than many other blu rays but does have it's problem.  While, when combined with a high def television, the picture is amazingly awesome, the player itself jams from time to time.  The buttons on the remote as well as on the face of the player can be unresonsive until the unit is unplugged from the wall and replugged in.  It also will make a bit of noise from time to time making the spinning of the actually disk audible.  When the company packaged the dvd player they stuck on a large advertisement to the top of the machine that is next to impossible to remove.  At first I thought we'd gotten a floor model by accident, but after returning the first one and exchanging it, we found that they all have this.  All in all the dvd player is alright.  We've had it for a few months now and have already experienced some problems  with it but we still have the box.  Nothing has been anything that we could figure out a way to work around. Eventually, it starts working again.

the vbr 110 works well until you go to operate it with another universal remote even a vizio.  It is a propriatary remote and won't work with any other.  Bad move other units are as good and do adapt.  Wish I hadn't bought it.

In my line of work as an entertainment reviewer, I need to keep up with the Joneses. And in this case the Joneses all have Blu-Ray players. It got to the point that I was turning down some things I had a chance to review because I didn't have a way to view Blu-Ray discs. In addition to that, my DVD  player conked out on me. I think it could have possibly been fixed with a good cleaning, but either way, I was without a way to watch DVDs out here in the living room, and the one hooked up to the TV my husband watches (we maintain a happy relationship by maintaining different TV viewing schedules) doesn't work either. I had a choice of the one in my son's room, my daughter's portable DVD player, or my computer. I chose my computer, which just didn't get as loud as I wanted it to with some discs. I started talking about buying a Blu-Ray player when I caught a good sale after Christmas, but it turns out I didn't need to as somehow Santa knew that's just what I needed. Santa brought me a Vizio High Definition Blu-Ray Disc Player VBR110. When I woke up  Christmas morning, it was already hooked up to the TV. Inside a stocking was the remote, a combo DVD/Blu-Ray Disc set I had for the film *Up*, and the manual. Woo-hoo! I was excited to finally get this Blu-Ray I had been waiting for. I resisted buying one at first, thinking maybe it was just another fad like Beta or 8-track, but I was assured that it really did have a better picture quality. The interesting thing about this Vizio Blu-Ray is that it's made to be hooked up to a high definition TV, something that we don't have in the living room. I wasn't expecting a better picture just yet, but it sure looked like the Blu-Ray on our old TV was better quality than the DVD in the DVD player on the old TV. Even DVDs on the Blu-Ray seem to be better, but this could be purely my imagination, part of the euphoria of finally getting this Blu-Ray. The first feature to be impressed by on this Blu-Ray is that it is very sleek. All you see when it's off is just the black box, the silver tray, the power and open buttons, and the Vizio name. That's it. When it's on, you see the visual display as well, light blue numbers and letters on a black background. Blu-Ray players play DVDs the same way they play Blu-Rays, so you don't have to get rid of all your old DVDs. You can play those just the same as you can play Blu-Rays. Additionally, the Vizio plays audio CDs, AVCHD, and MP3, JPEG, and Data CDs. The first time you turn the Vizio on, it guides you through the setup, just like any other major electronic item. It guides you through selecting video resolution, aspect ratio, and lanaguage. It can also be connected to the internet to enable additional content from the Blu-Ray discs, by connecting it to your home network via an ethernet cable. There is also a USB port, so you can access content stored on storage devices such as flash drives. It's electronics for the future. Personally, I've been waiting for a way to be move my DVR content to the computer or my iPhone, and all this ultra-connectivity tells me I'm that much closer to that. In the meantime, I'm going to keep enjoying Blu-Ray and DVDs.