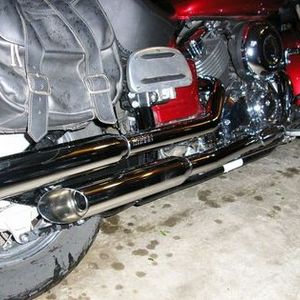 I drive a Honda VTX1300S. I wanted to give the bike a deeper more powerful sound without breaking ear drums. The Cruzers seemed to fit the bill. I had them professionally installed and carbs re-jetted accordingly. The sound is great, but the pipes get extremely hot compared to the stock pipes. I got a serious burn through my riding jeans when I was getting gas during a north to south cross-country trip. On top of that, the upper pipe has already discolored. Vance and Hines basically says, these pipes are not very thick walled and not guaranteed. Someday I will replace them with a better quality product. For now, I will live with them and the discoloration.

Ok, some of you may recall way back about a year ago when I first came here to write my world famous review of the V-Star 650 Classic that I had mentioned a burning desire to install a set of Vance & Hines Cruzers on my ride. Then life got in the way, as it so often does. Bathroom remodels, soffit and facia replacements, whole house painting and rotten siding replacements, gutters & downspouts. Now that I have some free time on my hands (yeah, how long is that gonna last?????) I decided to pull the trigger on the Cruzers. They arrived on the brown truck on a Wednesday morning and I tied 'em down on the back seat of the cruiser and headed for the house at lunch time. As I was pulling all the parts and pieces out of the box my buddy Ronnie the Painter, who was at the house painting (go figure!) says "You aren't gonna try and put them on the bike during your lunch hour are ya?" As it turns out, I probably could've. I waited until after work just to be safe. Removal of the old exhaust system and installation of the Cruzers took about an hour and was very easy. Loosen a clamp, remove 2 mounting bolts, followed by the mount itself, and the old stuff was off. Then do it all in reverse order and you're ready to roll. So I wiped off all the fingerprints and let the alcohol dry. Then I got a little alcohol for myself, just because.  Of course, just as I was finishing up, the mother of all thunderstorms hits. Lightening flashes and thunder boomers and a torrential downpour that'd make Noah start in with his bow saw again. So I sat back and had a smoke while I finished my beer and waited for the rain to stop. Or at least slow down. Well, I fired up Ol' Red and let her sit and thump there in the garage for a minute or two, but I couldn't stand it no more! Rain or no, I'm gonna run around the block! It was glorious. The growl of the Cruzers is a true thing of beauty. Compared to the non-sound of the stock pipes, this is like a Howitzer next to a BB gun. The line of the pipes is much cleaner than the stock pipes, and it makes Ol' Red wanna go out n cruise. And that's just what we did on the weekend: Up into the mountains, down the canyons, up the interstate. I'm ready for the summer and the summer is ready for me. You may not see me around much over the next few months! I got blacktop to turn under my wheels.