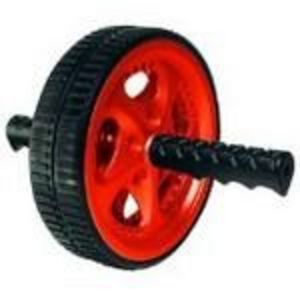 I was surprised at how difficult I found this to use at first, that is a good thing however because I could really feel it working. This is one of the most simple pieces of exercise equipment you can buy that really works. I started noticing a difference right away. The only thing that I might suggest is that if you have weak knees, to invest in a good workout mat or knee pads.

the Valeo Exercise Ab Wheel is a good product, but their are quality substitutions for this product.  what this product does is essentially the same as an exercise you may or may not have seen people doing at your local gym.  This is exactly the same as when you see people on their knees leaning over a bar ( the one people would use when they are doing double arm curls) with two weight on the end.  While on their knees and they roll the bar forward and then backwards.  This product will do the same exercise as this.  Don't kid yourself, whether you do it this way or use the Valeo Exercise Ab Wheel you are going to work the same muscles and apply the same exact intensity to them.    I will say though if you don't not have a bar and weights in your home, this is a good buy.  It won't up as much room, however you can't do curls with it, so maybe your better to just purchase the method i previously described

I hate gyms.  The idea of feeling shamed into going because I've spent money on membership just annoys me.  And I don't like the bleachy smell, or working out in front of other people.  But I don't like spending a lot of money on at-home equipment, either.  Like gym memberships, spending a wad of cash on a home gym may pressure you into using it, but eventually, you won't care and you'll just get rid of it.  (Ever notice how much workout gear you can find at yard sales?)  But something simple and inexpensive that works really well?  Now you're talking.  That's why I loved the idea of an ab wheel, especially after I saw my friend's little workout video on YouTube. He got down on the floor and rolled this thing out in front of him -- all the way down and back up -- twenty times, raving about how wonderfully it works the entire top half of his body.  "Oh, cool!" I thought.  "That looks fun!"  So I went out and bought one.  (It was a double-wheel model, not the single wheel, which is much less stable.) I brought it home, put it together, rolled forward...and couldn't roll back up.  Well, I did, eventually, but not without a lot of effort and a scary little burn in my upper abs.  So I put it away and did a little research.  What I learned is that the wheel is NOT for people with lower back pain or hip flexor tightness (common maladies among those of us who sit most of the time).  But take care of those issues first, and it's the best little gizmo you'll find to get rock-hard abs in the shortest possible time. So, I'm giving this gadget the best rating because it does what it's supposed to, very, very well.  Plenty of lean, mean athletes and physical therapists -- and my YouTube friend -- can attest to that.  My tight hips and lower back?  That's my problem, and not the fault of the wheel.  The quicker I get them functioning properly, the sooner I can get my wheel back out of the closet and get some six-packs of my very own.