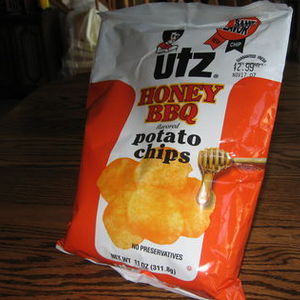 I just love the salt and vinegar I've tried all the brands out there and only one other brand I love .I can't get them in my area.I just discover these where I live I'm a happy happy happy no more ordering off the internet.Its all about the vinegar taste and utz has it down I LOVE THEM customer for life lol

Not everybody has to eat gluten free chips! Go back to the original.

I've had a lot of potato chips in my life, and Utz definitely has to be my absolute favorite in ripple form. They have salt free plain as well as sour cream and onion, salt and vinegar, and barbecue, all of which I adore, and they have always been made with care from quality potatoes for the best crunchy taste. Alone or with onion or vegetable dip, Utz chips are well worth the price.

Utz brand potato chips are a great alternative to the name brand chips you may be used to. Because these chips don't come from an extensively large company they can take more risks with flavors, leading to some intense flavor combinations. These quality chips are definitely worth a try.

Utz Potato Chips are pretty good, but not as good as Lay's (at least the original unflavored chips). They're a little bit less crispy, and a little lighter on the salt. Where Utz comes in strong is in their alternate flavors. Utz Sour Cream and Onion tastes better than the Lays variety, and Utz has more flavors to choose from. My favorite flavor, and you can't find these everywhere, is the Utz "Crab Chip." They're delicious and taste like "Old Bay" seasoning.

My family prefers Utz - Potato Chips over the leading other brands any day. Utz chips are always fresh and seem to have more chips in the bags then other potato chip company's. The Honey BBQ has to be my favorite flavor with its sweet and slightly tangy flavor.

I love Utz's sour cream and onion chips. They are the best on the market. They have a lot of flavor. if you like sour cream and onion chips, there are no other brands out there that will satisfy your craving like Utz.  Unfortunately, I can't say that they are healthy and good for you, but who is looking for that quality when they are purchasing chips?  Am I right?  I would totally recommend these chips to anyone.

I've been eating Utz potato chips since I was a kid.  They are always the favorite choice for my family.  We have tried other brands, but they just don't make the grade.  They are always fresh and crisp.  My personal favorites are the Honey BBQ.  Once I get started it's hard to stop.

We can not get these potato chips in our grocery store, so it is consider this a luxury item.  Anytime we go to visit relatives, they always have a supply for us in their house.  My husband thinks their crunch and amount of salt is just right.  The holidays are coming, so supposed he'll get his fix.  They are my second favorite chip, Martin's Kettle Cooked being my first choice.  But I'll go for any potato chip that is put in front of me, since it is the crunch and after taste that I'm after.

Utz, one of the best chips I ever tasted. They have been around since 1921, when Bill and Salie Utz were trying for a fresher potato chip. They started making them in their summer kitchen at 50 pounds per hour under the name of "Hanover Brand Potato Chips", in Hanover, Pennsylvania. As they out grew and could afford to enlarge their facility or build on a new site. The quality continued to be their main goal and still is the companies interest today.    Salie passed away in 1965 and Bill followed in 1968. The company is run by their son-in-law, F.X. Rice and continues to make chips with the freshest ingredients. Utz is the largest independent privately held snack companies out there today and produces more than one million pounds of chips per week for distribution from Maine to North Carolina. The line changed to suit the tastes of a changing society, adding pretzels, corn chips and snack mixes to their full line of chips.     If you visit there 600,000 square foot facility at 900 High Street, Hanover, Pennsylvania, they will give you a tour Monday through Thursday, 8 a.m. till 4 p.m. Visit their web site at utzsnacks.com. There is a virtual tour you take online.    As an adolescent, I went to work in the restaurant of my future in-laws (although I did not know it yet) in 1967. The chips they put on the plates with sandwiches came in a big gold can labeled Utz Potato Chips. They were the regular chips, but they were so good, fresh crisp and delicious. There were many chip companies out there, but Utz was the best. Later when my husband and I ran the restaurant we continued the tradition. Many times I can remember being too busy to eat a meal and would just grab some chips till I had time to sit down.     Today we are retired from business, but we still enjoy a good potato chip to accompany our lunch or as a snack. Chances are it's Utz, although, we don't have to settle for the plain chips, as Utz has many flavored chips to compete with a still growing market of snack foods. Among my favorites are regular chips, sour cream & onion, salt & pepper, crab, cheddar & sour cream and honey bbq.     Still the same good quality and taste I remember as an adolescent.