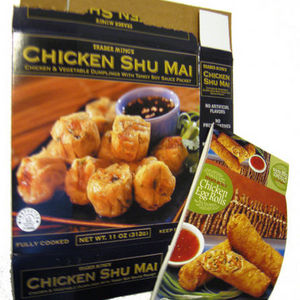 The Trader Joe's Ming Shu Mai is fantastic as it is closer to most Chinese Dim Sum.  What is even better is that it is made with chicken which is healthier, especially for me with heart and health issues.  Calories, fat, and sodium is reasonable. Myself, being of Chinese descent should give more credibility to the taste.  Many restaurants are loaded with msg and oil, not so with the Trader Joe brand.

Some nights after both of us have worked, it comes to this.  "Hi," says TunefulPal, "I'm at Trader Joe's.  Do you want anything?" I always do, but last night I wanted something quick and different and told Pal to surprise me with his choice.  So he came home with **Trader Ming's Chicken Shu Mai** and, in another box, **Trader Ming's Chicken Egg Rolls.**  We were so hungry we put the **Egg Rolls** in the toaster oven for the required 15 minutes at 350 degrees and, shortly after, gave the **Shu Mai** their requisite two minutes in the microwave. In our haste, we forgot the fresh coleslaw in the fridge.  That and a dish of rice would have filled out our meal in a little more nutritious way.  But that's for next time.  Within minutes we were going through the **Shu Mai** with gusto. **Trader Ming's** chicken and vegetable-filled dumplings couldn't hold a candle to the ones Pal makes from scratch, but they must have been a success.  Between us we ate all 18 **Shu Mai** (that's *three* servings, folks) in mere minutes.  Technically, they were accompanied by an ounce package of "Tangy Soy Sauce" which neither of us liked.  We went to the fridge and found hoisin sauce, an old bottle of plum sauce and one of our hot pepper sauces.  With combinations of these products, we came up with far more interesting compliments to the steamed dumplings.  *No artificial flavors or preservatives in this product*! Next came **Trader Ming's** take on **Chicken Egg Rolls**.  Egg rolls are a toughie for any company that tries to replicate something deep-fried and then freeze it.  **Trader Ming's Egg Rolls** required longer time than recommended in the oven.  About 20 minutes produced four reasonably crispy, well heated-through egg rolls which were far less greasy than the *real* thing.  (Sesame seed oil and canola oil are used here.) I thought the filling of skinless white chicken meat, chinese cabbage, bok choy, bamboo shoots, water chestnuts, carrot, and scallions with salt, pepper, and garlic tasted quite good.  Pal felt less positive and said he wouldn't want to purchase these **Egg Rolls **again. For those who've eaten a lot of actual Asian cooking, the **Trader Ming** products have to be designated *faux* Chinese.  For us, last night, they were a welcome port in the storm.  Although they can't be added to our list of regular favorites, you might enjoy trying them.  They are good representatives of a cuisine difficult to freeze with success.