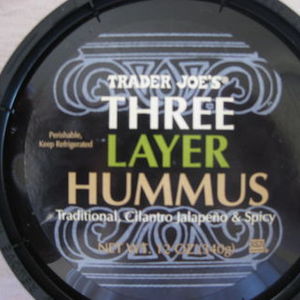 To think that I used to say:  "It's only **HUMMUS**, what's the big deal?"  It took the intervention of [TunefulGal][1] (and Pal) to persuade me to taste the stuff at all when I was visiting them in California a couple years ago.  That made me a believer but it wasn't until after I returned home and ran smack into [Sabra Hummus][2] that I really became a **fan**.  I think I have probably tried most of the Sabra flavors and I'm always on the lookout for other new concoctions, including this one:  ***Trader Joe's Three Layer Hummus. *** ***Trader Joe's Three Layer Hummus*** is a combination of three flavors: Zesty Cilantro, Purely Traditional and Roasted Red Pepper, layered up in a handy 12 oz. container that you can dip or spread from.  This hummus is lighter and fluffier than Sabra, almost of a** whipped** consistency, and with a delightful spicy (but not TOO hot) little "nip" to it.  There are no artificial colors, flavors, or preservatives.  Those things aren't necessary with ingredients which include:  chick peas, water, sesame tahini, sunflower/extra virgin olive oil blend, lemon juice concentrate, roasted red peppers, sea salt, granulated garlic cilantro, Jalapeno peppers, parsley, spices, and natural flavor. **STATS:** It has been ordained by somebody that 2 tbsp. constitutes a single serving which contains 50 calories with 30 calories from fat.  There are 3 grams Total Fat, .5 grams Saturated Fat, zero each Trans Fat and Cholesterol, 160 mg. Sodium, 5 grams Total Carbs, 1 gram Fiber, zero Sugars, 1 gram Protein, 4% (D.V.) each Vitamins A and C, and 2% each Calcium and Iron. **MY VIEWPOINT:** ***Trader Joe's Three Layer Hummus*** is a joy to snack with because of its wild flavors and delightful consistency but also because **DANG**, if this ain't the **PURTIEST** stuff.  No kidding, the three different colors make it really look lovely, especially when spread on a cracker or a slice of whole grain toast.  Definitely, ***Trader Joe's Three Layer Hummus*** would be a great addition to the buffet for a Girls' Night In or the next Scrabble skirmish.   [1]: http://www.viewpoints.com/aboutme/TunefulGal [2]: http://www.viewpoints.com/Sabra-Roasted-Garlic-Hummus-review-76fa4

I had never known about Trader Joe's until I recently relocated to Charlotte, NC.  Upon first glance, it seemed to me like it might be just a really small store filled with familiar items, (as well as many that were not available anywhere else.)  This  3 layer hummus dip was in the latter category.  I was introduced to hummus about 8 years ago and have enjoyed it, but got tired of the chickpea-ish flavor after a while.  Then, I spotted this tub of 3-layer hummus dip at my local Trader Joe's store, and instantly I became intrigued.  Not just 1 flavor- but 3!! How could this be?, (I questioned myself.)  Nevertheless, I picked up the tub and put it into my cart.  When I arrived home from the store, I was anxious to try the hummus that I had purchased, so I washed up a fresh bell pepper and sliced it up in  strips to get ready for some major "skinny diping" into the hummus!  My taste buds went wild!  I tried to try each layer seperately, (which was hard to do, since they were layered on top of each other,) but one taste stood out for me in particular- (the jalepeno cilantro!)  My tastebuds were in heaven!!  Now, I purchase a whole tub of the jalepeno cilantro dip and devour it like it's going out of style!  Bon Apetit!