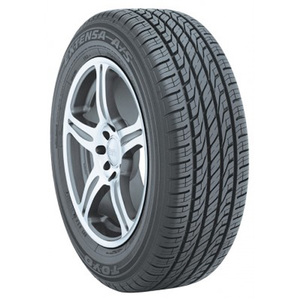 I purchased my Toyota Highlander in 2007 and the SUV had Toyo tires installed. I found that I really liked these tires and when the time came for replacing them I looked around for a company that carried the Toyo tires. I discovered that Kaufmanns has Toyo tires and purchased my new tires there.. The Toyo tires are not only reasonably priced but if purchased at the right place they automatically come with hazard insurance. The Toyo tires allow my Highlander to handle very well in all kinds of weather but the really good deal comes in wet weather, the traction is great. I have never had my car skid or even slip the tiniest bit. Living in the South I am unable to comment about snow but on icy roads there is no better tire then the Toyo. I have had to drive on several occasions in icy conditions and have never had any problems with the car handling or any traction issues. I have had other types of tires in the past but none of them have been as good as the Toyo which also lasts up to 65,000 miles.. and actually does last that long.

This is a very road noisy tire and I would not purchase it again. I was supposed to be getting a Cooper tire put on but it was out of stock so they put this tire on and let me tell you it really is extremely noisy! I will stick to the Michelain tires that were on it when I purchased it, from now on.

Some time ago, I found myself needing to replace the tires on my BMW 318ti, and although I have normally used Continentals or Michelins on my cars, these were on sale for a considerable discount, and based on some of the reviews I saw elsewhere, it seemed like quite the bargain. However, when actually on my car, these were not nearly as good as I thought they would be. On the positve side, these tires seem to last reasonably well, and their dry handling and braking characteristics are decent enough. However, they also have some notable shortcomings. The biggest problem I have had is that they do not get very good traction in wet conditions, which, as it rains a lot in my parts, can be a significant problem. Although I have not had enough of an opportunity to try driving with them in snow to form an opinon of how good they will be there, I suspect that they will have some issues there as well. Also, these tires seem to have fairly stiff sidewalls, as the ride quality is not the greatest, and they excaberbated issues with worn shocks and suspension components, which became a lot worse with these tires than the ones I had on there previously. Had I had do to this all over again, I probably would not get these tires, but go for something else if possible.

I recently had to purchase tires for my Toyota and originally wanted to purchase Michellin tires because that is what was on the car before. The original Michellin tires I felt were the best tires available but I discovered that Toyo is just as good and the price is much better. The Toyo tires that I bought for my Toyota vehicle are just wonderful, they work fine in good weather and when it is wet they really grip the road. I do not have to worry about slipping when the pavement is wet, and the car really handles well no matter what the weather. I live in the South so I am not able to write about snow but we do occasionally get ice. Even on ice these tires are the best and will not slip and slide. The tires will also last a long time, about 65,000 miles and I know from family experience that they will actually last the entire 65,000 miles and not wear out sooner. These tires are so good that they even look newer after several years of use.

best tire I have ever had on my vehicle. They look good and do not seem to wear like other brands. I have gotten 40000 miles on them and they still look great. I would recommend them to anyone. They were a little pricey but worth every penny. They can be purchased at most tire stores.