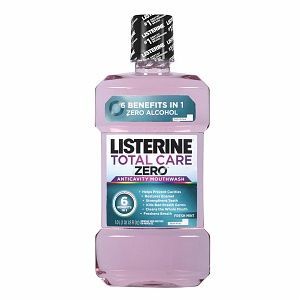 I am a huge fan of Listerine but I always didn't like the burning sensation the original one had. This one, on the other hand is amazing and i can clean my mouth all day long. Love the flavor and the color. The price is not too bad either.

Listerine Total Care Zero is appealing for those who might not like the mouthwash "taste. I don't mind if my mouthwash tastes like mouthwash, even with the "burning" sensation that sometimes accompanies it. I know for some people this zero alcohol mouthwash is a plus but it does nothing for me. I don't like the taste, and I don't feel like it's done the job. I generally like Listerine products. I think they're effective and helpful in maintaining my dental health. But I would not buy this product again. In fact, I'm pretty sure I bought it by mistake because the label is similar to the original version. Maybe it would be good for people with more gum sensitivity, or for older children who are using mouthwash for the first time. It's a step up from the original Listerine that was hard to stomach, but when it comes to feeling like I've gotten my money's worth, I'll pass on the Total Care Zero.