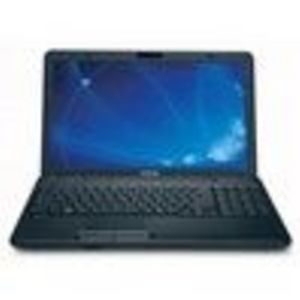 Once the box was opened, a nice laptop was revealed with "TOSHIBA" written across. Upon lifting it, it was also found to be light at a little more than five pounds. Mostly because of the design of the unsturdy screen. Which is the only fault with it. The material is plastic with a trax texture similar to a pistol grip which makes for easier grip on the laptop. Would not want it to slip, so good job on Toshiba's part. The main cooling vent is on the left side with several others on the bottom. The battery lies underneath the screen pivot with the power cord insert in the same relative location. Next to that is the disc drive which opens immediately at the touch of a button. On the opposite side you'll find two USB ports, a headphone jack, and a few other ports. No HDMI though. A lonely button above the keyboard powers the computer. You can set this button to do other functions as well. Overall, a well designed machine. The keyboard is nice with a flat design. The keys press down easy and are quick to type with. It has a typical qwerty setup with a number pad on the side which is activated with number lock, of course. FN controls include volume, brightness, and zoom among others. The touch pad has side to side scroll on the bottom, up and down scroll on the right side, pinch for zoom in/out, and tap for click should you decide not to use the bottom key. The fault with this though, is that you will almost always tap the touch pad when proceeding to use it, therefore accidently clicking on something you didn't mean to. The only frustration with the computer. No option could be found to disable it, but there might be one. You can always break out the mouse. The hand rest has the model sticker, an Intel Core i3 sticker, a Windows 7 sticker, an Energy Star certification sticker, and an EPEAT Gold sticker. The specs are as follows: 500GB of hard drive space, 2.53GHz processor, and 4GB of ram. For the price, it was probably the best deal there was for a computer at these specs. The computer starts up in about thirty seconds. Not that long at all. After the initial set up, the desktop is revealed with its 1366 x 768 resolution. Which looks fine for whatever you do on it. The computer runs smooth for typical uses. These specs cannot handle modern games, so keep that in mind. The hard drive space is decent for typical users. More than enough for music, documents, what have you. The speakers are not amazing like most laptops. They don't sound great but at least they get loud enough. No real complaints performance wise. The computer runs on Windows 7, so those familiar with the OS will have no problem. There a many programs built in already such as Google Chrome, Internet Explorer, Adobe Reader 9, and others. You will have to download other essentials like iTunes or VLC. For those who like Safari, you have to download that as well. There are Gadgets, which are the Windows equivalent of Widgets on Mac OS. There is one for weather, another for currency conversion and other not so fancy ones. You can download more should you not be satisfied. Basically, it is a computer. Nothing more, nothing less. There are a few recommendations as far as accessories go. The touch pad can be cumbersome like any, so get a mouse. The computer can run hot which is no good for putting on your lap, or for the computer obviously. There are many laptop coolers and stands, but the only one that really suits the computers ventilation needs is a Cooler Master U3. Use SpeedFan, a temperature monitor available for download on the internet, to keep tabs on your Toshiba's temps. Ideally, a computer should not exceed 50 degrees celsius, or damage occurs on the parts. The Cooler Master keeps the computer on an average of 30 t0 40 degrees. So get that for the laptop. Highly recommended. This computer has no real problems. It runs fine, looks good, and does most everything. A great buy. Battery Life Regular use about 3 hours. Gaming about an hour. Support & Service Never used this. Speed/Performance Regular use runs fine. Can run previous generation games. Durability Not built tough like a premium laptop. Has a weak screen and plastic casing.