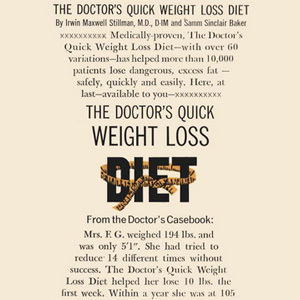 Before there was ever an Atkin's or South Beach Diet, there was **The Doctor's Quick Weight Loss Diet**. Developed by Dr. Irwin Stllman, this was the original all protein, no fat or carb diet that both promised and delivered incredibly quick results. **Background** Weight control was never a concern of mine until I learned I suffered from an overactive thyroid that had progressed to a full blown case of **Grave's Disease**. The symptoms? Inability to maintain my weight regardless of how much I ate, irregular heartbeat (atrial fibrilation), bulging eyeballs and a certainty that I was suffering from pancreatic cancer. How else to explain the uncontrollable weight loss? The solution? Radiate and kill my thyroid. Within a couple of months my heartbeat became regular, my eyeballs receded somewhat and my metabolism slowed, and slowed and then slowed some more. I began taking Synthroid to replace the thyroid hormones my body could no longer produce. But, for the first time in my life, calories seemed to matter. In less than a year, I lost my self described "Greek God" body and puffed up from 160 lb to an ungainly 235 lb. Yikes! Since I had never needed to eat in moderation, I needed something so simple and so fast that even I could follow it. **The Doctor's Quick Weight Loss Diet** The Doctor's Quick Weight Loss Diet was first published back in the 1960s. It's been out of print for quite a while now. Fortunately, this is a diet so simple and so severe that one can commit it to memory easily. Essentially, you can eat any lean meat, poultry, fish or eggs and hard cheeses in pretty much unlimited quantity. You can boil, broil or bake it. I suppose grilling is OK as well. That's it! If it's not one of those 5 things and not prepared in one of those 4 fashions, you can't eat it! Case closed! There's no need to count carbs because on the Stillman Diet you can't eat any. Like I said, simple and severe. **Oh, and the water** **The Doctor's Quick Weight Loss Diet** is an all protein diet, similar but even more spartan than the Atkin's Induction Phase Diet. All protein diets put a strain on your kidneys who are trying to process all the ketones produced by the diet. Dr. Stillman insists that you drink 10 8oz glasses of water each day. You can also drink non-caloric beverages in their place. Unlike the Atkin's diet you can drink all of the caffinated coffee you like, just skip the cream and sugar. **The Results** Most people choose to stay on this diet a month at a time. In a month, a typical overweight 6 foot male can expect to lose 30 lb. Following my rapid weight gain after thyroid treatment, I stayed on this diet for 3 months and lost 70 lb. Obviously, in months 2 & 3 the rate of loss decreases as you have less to lose. At the end of the 3 months I switched to an advanced stage of Atkin's and lost an additional 10 lbs. a bit more slowly. Sticking to the Atkin's Maintenance Diet and later, the South Beach Diet I manged to stay within a few pounds of my goal weight. **My Viewpoint** This diet certainly isn't for everyone. But, some of us need to work at the extreme, and for those of us who do, the Doctor's Quick Weight Loss Diet is a sure thing. You eat two or three hard-boiled eggs for breakfast and trust me, you won't be hungry again until mid-afternoon. High protein content foods are extremely filling, despite their relatively few calories. Why my sudden rediscovery of the Doctor's Quick Weight Loss Diet? Well, it seems that my lagging will power and the resumption of some poor eating habits have taken their toll on me following the last couple...OK, three Holiday Seasons. I've plumped up nicely. Not to worry though. I'm on The Doctor's Quick Weigt Loss Diet again. After 2 1/2 weeks I've already lost 20 pounds. I'm wondering if my "Greek God" outfit is still in the garage? Rudi