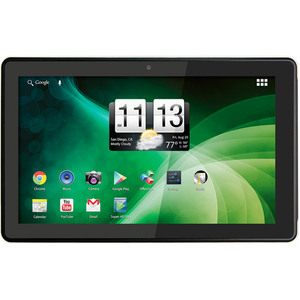 I received this as a gift for Christmas in 2013. It stopped working completely after 2 days!! Battery Life Dies very quickly App Availability It seemed to get any app I wanted, but can't say much more than that because 48 hours later, nothing at all worked. Design The design is very seek and nice. Durability crashes after 2 days... I'd say it's not very durable.

First of all, I must clarify my rating of 1. It is only because zero was not an option. What can I say? This has to be the WORST electronics purchase I've ever made. I bought this as a gift for my fifteen year old daughter. It was a little slow from the start, but hey, I knew it wasn't the best in the market. However, I had no idea just how bad this tablet was. Before long, it was freezing up, shutting down, and the battery life was terrible. Apps wouldn't load correctly, if at all. By three months, it wouldn't even start up. Occasionally I would charge it thinking the battery life was low. Sometimes it would start up after a charge, and sometimes it wouldn't. Even if it did start, it either wouldn't load, or would just shut back down. I made the purchase from a big box store. Unfortunately, their in store return policy is 30 days on electronics. After three months of irritation with all the issues, returning it to store (or even exchanging) was no longer an option. I contacted customer service. While the representative was friendly enough, he explained my only option (though it was still under warranty) was to send it to an authorized service center with shipping at my cost. If it was found to be a defect, they would repair and return. If they decided it was NOT a defect (seriously???) I would be charged a repair fee that could run more than the original cost! In the end, I decided to cut my losses. It went in the trash where it belonged, and I ended up finding a used Kindle Fire, and my daughter hasn't had any complaints. In fact, I picked up another used Kindle Fire for myself and love it. To sum up, steer clear of this product, and honestly do your research before you buy!