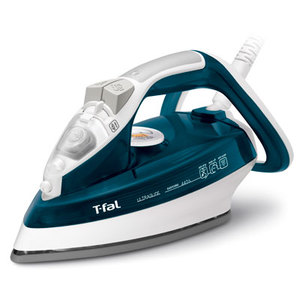 T-fal Ultraglide Easycore Iron FV 4478 is a good iron for me in my view as I had a lot of trouble in learning how to iron my clothes. Performance The performance depends not only on the model but also the user. As I was a new user at that time, I would say that it worked good for me. It was smooth and easy to iron my shirts. Safety I tried my best while using it but I accidently overdid my shirt once and there is a mark now at the bottom. The regulator of the product is easy to use but be careful. Ease of Use I understood the manual easily. It was easy for me to use although I had trouble initially but that was because of the fact that I was a beginner at that time. Durability I used it for a month and it is a durable iron that could be used for a longer period of time. without any problem Design The design looks good to me and I like it. I like it's color and the shape. It fits easily into my small iron stand and the design is perfect for the shirts.

I am a hard-core ironer. I iron lots of clothes, and I iron them very well, if I do say so myself. So I take my choice of irons seriously. This T-fal iron is just OK. It's not great, but it doesn't stink. While it doesn't live up to my standards, it's probably just fine for an average ironer -- someone who doesn't iron daily, and doesn't worry too much about clothes being ironed to perfection. Performance Does it get the wrinkles out? Yes, eventually. But it's not heavy enough to give real pressure, and I found myself having to iron over stuff a few times to get the results I wanted. Its steam and spray functions work just as they should. It heats quickly, and it gets very hot. I had one major performance complaint, though. This iron is very loud for some reason. When it steams, it gurgles and crackles a lot. The instructions say to use regular tap water, so I don't think this has anything to do with my water quality. This may sound like an odd complaint, but honestly, it's loud enough to be incredibly distracting. Safety Comes with standard safety features, like auto shut-off. Ease of Cleaning The ceramic plate is easy to wipe clean. Ease of Use The Easycord feature is quite nice. The cord pivots, so it stays out of your way as you iron. Also, the operations aren't complicated -- it has all the standard heat, steam and spray settings. Durability I haven't tested it long enough to really rate durability. One problem I find with irons that get heavy use (even some of the more expensive ones), is that they have reduced performance after just a few months. I haven't had this long enough to know if that's the case. I did drop it once, and it didn't crack anywhere, which is a good sign. Design Again, the Easycord is a great design feature. Also, the cord wraps nicely around the base for storage.