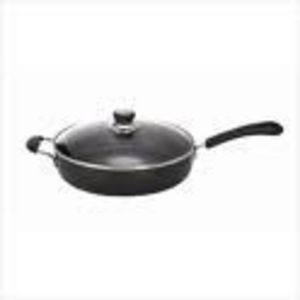 I should have known by the low price that it was not very high quality. This is not an appropriate replacement for the heavy duty 18/10 stainless steel with nonstick interior that I have been using for the past 10 years and finally wore out. May be ok for people who don't cook much, but we like to eat around here. It is thin as a cheap tin can and as easily bent and warped as a tin can. It was not even able to keep a round enough shape to be able to fit the round cover on top of it. I ordered this sight unseen from amazon just going by the t-fal brand name, and the many 5 star reviews. I was very disappointed to see it in person, Doing some further research has shown me I am not the only one to receive mine warped and bent. I am hoping to be able to get a refund and I will think twice before purchasing this brand again. I have also seen mention of poor heat distribution specifically related to the problem with warping because not all points of the bottom of the pan will come into contact with the heating element.

I don't have a huge family, but I do a lot of stir-fry type all-in-one-pan meals and find large skillets like this necessary. I have always used what was previously called four quart chicken fryers (I have been through at least four of these, that I can remember), but when I found this five quart pan, I thought the bigger the better. That part is true. I always really wanted the advantage of having a handle on both sides of the pan. And I wouldn't consider anything that was not non-stick. I also like T-fal, even though they eventually start to lose their non-stick coating and have to be replaced - even the T-fal chosen by a popular public television cooking show as a best buy was declared to be less than perfect and chosen for it's relatively low price because non-stick just has to be replaced now and then. But T-fal lasts, for me, for a decade or so, so I like them. Anyway, this particular pan comes with the two heat-resistant handles, a glass lid with a tiny steam hole in it, non-stick coating, and is huge. The non-stick works great for now and I love the size. Here are the issues: Turns out that I rarely even use the small handle on the opposite side, so it wasn't so important after all. The pan is so big that while it may be handy to use it to carry the pan from the stove to the counter, it is still impossible to turn the pan over to dump things out of it without help - the size of the pan is bigger than any serving bowl so to dump it's contents without help is to dump it's contents not only into the serving bowl, but also all over the counter. Also, that little handle gets hot! I was shocked at that. You need a potholder to grab it even though it is supposed to be heat resistant. Also, I don't like the little steam hole in the lid. I like to steam stuff and I don't want the steam escaping from a hole. I would rather control the steam flow with either a little moving cover (like found in my original T-fal set) or by just setting the lid ajar. I don't like having the control taken from me via a hole I can't cover. The lid is glass, but who cares? You can't see inside a completely steamed-over lid anyway, right? Aluminum would be lighter and could have that little sliding steam cover that was on my first T-fal lids. One more thing: you had better want a big pan. This pan is so big that it practically eliminates the ability to use the adjoining burner except by the smallest of sauce pans. But overall, I still love it. I use it all the time and I would buy another one to replace this one. Doesn't Stick While the non-stick coating is still in tact, it works great. I know the day will come when it will not. Heat Distribution My favorite burner burns really hot in one place, but this pan does a fairly good job at ignoring that issue. Ease of Handling Big is harder to deal with, that's all there is to it. Ease of Cleaning It's non-stick, after all. Design Don't like steam hole in lid and extra handle gets hot. Durability I expect it to last as long as my other T-fal products have.

First off, I'm not sure how you could give this less than five stars. One of the cons I've seen -- "Won't Last Forever"... well, does anything?? This jumbo cooker is fantastic for our family of 4 -- large enough to cook a few pounds of burger, fry four chicken thighs, scramble a dozen eggs, make three grilled cheeses and deep enough for sauces and liquids. Clean up is a breeze! Even overcooked bits of food are easily wiped off, no more getting out the brillo pad just to clean your pots and pans. This pan heats very evenly all over and the handles don't become ridiculously hot. I love that there are two handles, being a larger pan it can hold quite a bit and become heavy when filled. Moderately priced, the T-Fal cookware really is the only geniunely "non-stick" pans I've ever had. I highly recommend this jumbo cooker to anyone, and if you can't afford a full set of T-Fal cookware this is a fantastic multi-purpose starter piece, great for a single person or a family of four (or more!).

This is a very versatile pan, good quality, and non stick. I use it for everyday cooking and it is one of the best pans I have ever used. making sauces, curries, even desserts becomes easy because of tis non stick surface. The red dot in the middle - thermospot lets you know when the pan is ready to start cooking. The only con is the residue that develops after multiple use over two to three years and then I have to replace it. But I just go to the store and buy another T fal pan. No other brand is going to replace this one. I have tried a few others like Farberware non stick pans but they developed a black residue within six months and I had to replace them. The T fal pan may be costly but at least I do not have to replace it for two years so it saves me money in the long run. The price we pay for this pan is worth the quality we get. Also look for sales in department stores and add the 10 or 15% off coupons and you can get thsi pan for a great price. Totally worth it.

I have been wanting one of these for quite some time now. I held off because I have other skillets and didnt want to spend the extra money for something I didnt really "need".  I have many skillets but over time they are no longer non stick, they get worn out and just no longer fill the needs of my family. My son and his fiancee wanted to know what I would like for Christmas, I always say dont worry about me but someone decided to let them know that I had my eye on this ! Christmas eve we were opening gifts and when I pulled this out of the box I truly felt like a kid at Christmas!! I had to contain my excitement because others where just looking at me thinking, its just a skillet! Christmas morning, we all had french toast. This skillet was like a dream. So easy to use, not too big, just the right size!! I cant wait to cook many many meals in it. I had recommended it to everyone who asks what I got for Christmas. Perfect for making the one skillet meals. Lots of room and the 2 handles are great! My lastest meal was homemade sausage gravy, it was so nice!  Kept warm for quite some time just by putting the lid on it. When this wears out, I will not hesitate to go get a new one right away!!

This has to be the biggest, best built skillet I have ever encountered.  As a family of five, we needed a skillet that could handle all the food we have to cook for each meal.  This skillet is the best for cooking a half pound of bacon and a half pound of sausage together for breakfast, or three boxes of Red Beans and Rice for lunch, or frying chicken for dinner.   This skillet heats evenly, and even with the grooved bottom, it has not scratched (as we were afraid would happen when we got it originally) our ceramic cooktop stove.  The Non-Stick has lived up to the T-Fal name and after a year of use, it has yet to nick or ding or flake like some of our other - and more expensive, I may add - skillets have before. The ONLY complaint I have with this skillet is that it is just plain BIG.  It does not fit well in a cabinet, nor will it fit easily into the dishwasher.  I find that it is the one thing that I almost always hand wash it.   But...It is a very good piece for the money.

A long, long time ago, when I first married, I purchased a 5 quart T-fal cooker because it seemed like a good product. I wasn't disappointed in the least.  So, when it finally gave out, I didn't hesitate to get a new one.  Now, it has been a long time since I was in the cookware section of the store, so I was amazed at the choices, but didn't hesitate in getting another T-fal.  I was a bit sruprised to see an extra handle on it and was a bit concerned if it would fit in my small cabinets, but I purchased it anyways because it was a T-fal.    Since purchasing it, I am not at all disappointed. It is truely non-stick.  I love the see-through lid with the little vent. I also realized why there was an extra handle on it when I saw how convenient that made moving a big, heavy pan around on the stove, or how easy it was to pour the contents into another pot.  I definately love the new improvements that they made from the old and anchient T-fal that I previously owned and look forward to this pan lasting just as long and being one of the main go-to pans in my kitchen.