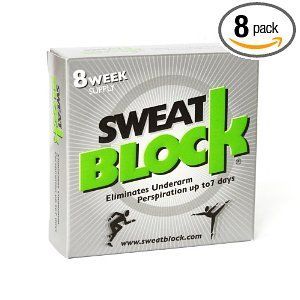 Since moving to CA from NY I've develop this excessive underarm sweat, I couldn't find anything that worked for me until SweatBlock. The first week I had to use it every other day until I could got a week without applying another patch. Now I can wear my clothes and not worry about sweat spots. It works and I'm glad I found it.

This is a very good product. I suffer from excessive sweating, and have tried all of the clinical strength deoderants, and even prescription deoderants. All work for awhile, but then I must build up a resistance to them. Plus they usually irritate my skin. This is the first product that doesn't irritate my skin and keeps me dry. I have occasional underarm wetness, but not nearly like I used to. I am now comfortable wearing lighter colors and am not confined to black.

My son is a drummer and for the last several years he and his band have been playing locally as well as traveling throughout the southeast to play their gigs. Playing the drums is very demanding and exhausting if you do it right, and my son puts his whole heart into every song he plays. He is up on small stages, in packed venues, with 5 other band members, and hot, bright lights shining down on him. Needless to say, he sweats like crazy! My son hates it when his underarm perspiration causes large, nasty looking, uncomfortable wet spots on his clothing. He usually wears no sleeve t-shirts when he plays, but then 'the sweat pours down his body like the music that he plays". (I borrowed that line from Bob Seger's Turn The Page). Anyway, whether the perspiration is pouring down his body or his clothing is soaked with sweat...he absolutely hates it. It used to drive him nuts. Then he began searching for anti-perspirants that would really stop the sweat and he has found several that work extremely well. They cost more than regular anti-perspirants/deodorants, but they are worth it. One of the most effective products my son has found to stop his excessive perspiration when he is playing is **SweatBlock Antiperspirant Wipes**. The drummer of another band that was playing at a show where my son's band was also playing started a conversation with my son that eventually led to my son complaining about his awful sweating and the other drummer recommended these wipes to my son. My son bought some as soon as he got home and he won't ever go on the road without them again. That's how well they work! Here are the **product features**: - *Eliminate sweat, decrease odor, and stay dry for up to 7 days with each simple application. * - *Safely and effectively treats hyperhidrosis and excessive sweating with a once-a-week application. * - *Formulated to block the sweat glands, protect against irritation, and soothe your skin. * - *The unique formula and method of application were created by a former Harvard Professor. * - *Contains 8 individually wrapped pads, which are presoaked in a strong antiperspirant solution. Simply dab the pads on the skin once a week for effective protection from sweat and odor. * **SweatBlock Antiperspirant Wipes **are little miracle workers and work exactly as they claim. My son swears by them and he makes sure he doesn't ever run out of them. He doesn't use them when he isn't on the road, because he doesn't need anything this strong unless he is playing drums nightly for a week or more. But when he is...he depends on these wipes to keep him dry and they do just that, every single time he uses them. If you suffer from excessive underarm sweating, this is your answer. It's safe because it stays on your skin but never enters yur body. It doesn't wash off, wear off, or rub off. It simply stops you from sweating under your arms. **SweatBlock Antiperspirant Wipes **is a 5 star product that really deserves 10 stars. It's guaranteed by the manufacturer and it's very, very highly recommended.