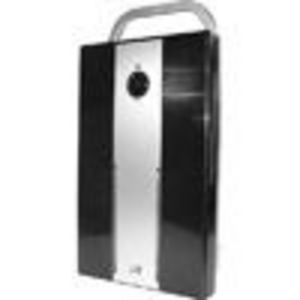 This is a very small, compact mini-dehumidifier. It sounds great, it even has an ultra-violet light to help rid your home of contaminates and mold. It isn't overly loud. However, that's where the good stuff ends because it is a rather dismal failure. Dehumidifiers should remove excess moisture from your house, and living in southern Mississippi, we've got humidity to spare. This little machine seems to fail to find it, however. I was concerned that the relatively small reservoir would require frequent emptying, which was more than once daily, in my mind. Unfortunately, it doesn't. After four days of running, there was a scant 1/2" of water in the bottom of the very small reservoir. I had thought I'd move it from room to room, as needed, to ensure that we didn't get funky smells or mildewed areas as a result of not using a closet or spare bedroom. Instead, I think I need 3 or 4 per room, and our mid century house does not have large rooms OR high ceilings! I'd read plenty of reviews (I thought) to make sure that we got a quality unit. The reviews I read had only complained of noise from the fan, which I assumed we could cope with because we like white noise to block the sounds of traffic, etc. plus we could locate it in another room other than the one we'd be using. The noise is instead very quiet--less than a new fan would produce. I'd not mind the noise one bit, but I really would prefer that it did remove the moisture from the air better. Overall, I'm highly disappointed. It doesn't do the job it was obtained to do. It doesn't even come close to minimal expectations. Even comparing it to the ancient unit (produced in the late 1950s) that we had when I was a kid, this is a dismal failure, and I'd think in 60 years, something would have improved besides a tiny ultra violet light. We are stuck with this unit and its dismal performance for now, but we're shopping for one that can actually remove some moisture and perform, noisy or not. This is nearly useless. Design It looks good. Wish it worked as well as it looks.

About three months ago, I was searching for a small dehumidifier for my bathroom. It was always really steamy in there, and I was getting tired of all the humidity. I purchased the Sunpentown mini dehumidifier. It was definitely a bargain, and I have not really had any problems with it so far. The only thing I can really say I dislike about it is because of its size, it would not fully remove all of the humidity from a normal sized room. However, I am using this humidifier for the bathroom, so it is completely fine. I would recommend this to anyone who is looking to purchase a mini humidifier for a small room. Effectiveness It's definitely effective and efficient enough for a small room, but it probably would not do the job for a larger room. Safety Very safe. Ease of Cleaning It is so simple to clean the filter on this machine. Durability Very strong and sturdy; especially for its size. Design I love how small it is. It can fit in even the tiniest of rooms. It doesn't take up much room at all.

The Sunpentown Mini Dehumidifier works very well despite it's small size. I needed a dehumidifier for my bathroom. It didn't have a window in the room and even with a ventilation fan it was still a steamy mess in that room. I needed a smaller unit, not one of the massive ones that will dehumidify your entire home. So this seemed perfect for me. I turns out that I was right. It worked great. It pulled a lot of moisture out of the air. It holds quite a bit of moisture before it needs dumped also. And it runs relatively quietly. Effectiveness Very effective. It pulls moisture out of the air and leaves behind fresher, dryer air. Safety Perfectly safe unit. I can't see any safety concerns. Ease of Cleaning It's pretty much self cleaning. But it doesn't take much effort to clean. Durability I've had mine for over a year and it's still going strong so I think it's plenty durable. Design The design is pretty basic. Nothing fancy, but it gets the job done.

I have used this unit in my small bathroom that has no ventilation for 2 years. It worked well to pull the moisture out of the air and keep my walls from moldin in the summer when I can't open the windows. It worked well for about 2 years of almost continuous use before dying. It was fairly quiet most of the time. Effectiveness It pulled enough moisture out of the air that I had to empty it about every 5 days. It was being used in a small bathroom that I took my showers in. It kept the humidity down so that there was minimal condensation on the walls after my shower, and dried the air quickly after I was through. Safety I had no safety issues with mine. However, I was concerned with how hot the block on the power cord would get. I kept it on a fireproof trivet, just in case. Ease of Cleaning I never had to clean the unit. The uv light kept the water it pulled from the air clean. It was easy to empty and restart. Durability It lasted about 2 years with no problems. I used it almost 24/7. Design It was nice and small. Easy to fit into a small space.