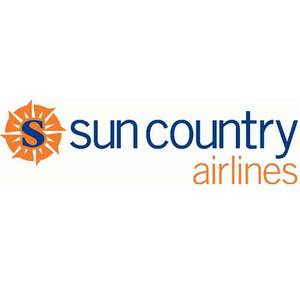 Flew on Sun country last summer to Seattle and back, the seats were spacious, and the flight was comfortable.

In all honestly, I now only fly Sun Country when it seems that there's no other choice. Simply put, flying Sun Country is overall just a huge headache and it's more troublesome than helpful. First off, in my experience, the flights are never on time. I'm not talking about 30 minute delays; they're literally hours upon hours long. I once had a connecting flight that was delayed 5 hours, and when I spoke to customer service, I received no compensation whatsoever. What's worse is that Sun Country only flies to certain cities on certain days, which makes it super difficult to rebook or change flights. There's absolutely no flexibility. The planes are also super old. The seats look really worn and interior of the plane just seemed dilapidated. Also, I hate that Sun Country charges a fee for online check-in. Free online check-in has become such a standard and given amongst airlines that it actually shocks me that Sun Country still charges for it. It's definitely a hassle having to come to the airport early just to check in! Until Sun Country makes some changes, i don't ever want to fly with them again!

Some friends and I purchased some last minute tickets to Las Vegas on Sun Country. They were the cheapest flights that were available for the time frame that we were looking to travel. Service Sun Country Airlines offers discount flights between a number of smaller regional airports throughout the United States. When I was on their website booking my flight, I was pleasantly surprised to see the variety of airports that Sun Country Airlines services. In-Flight Accommodations Seeing as how Sun Country Airlines is a discount airlines, I was not surprised by the lack on in-flight accommodations. They were the average offerings of any discount airlines. The flight attendants did the minimal required work, but seeing as how my flight into Las Vegas was not an extremely long one, there was not much work for them to do. The good news is that one of the flight attendants had a magazine I was interested in flipping through so she shared it with me for the duration of the flight.

Overall we really like Sun Country Airlines. They run really good sales every now and then which makes it easier on the pocket book and I enjoy that their home base is in Minnesota. They do have higher fees including an ahead seating fee which is probably why I don't give it a 10 but then most airlines have crazy fees these days! Service The service on Sun Country is out of this world. We have traveled many times to and from Seattle with our children who are small and every time the service has been wonderful. One flight I was on with my aunt and my 2 mo old heading to my fathers funeral and there was a gentleman who was sitting by us, the flight attendant asked him if he wanted to move closer to the front, probably because he was sitting next to a newborn and then came to tell us she did it so there was more room for us! Wow, just wow! In-Flight Accommodations I haven't been on a flight that has had a movie with Sun Country, not sure if they do that or not. But they do have free beverages and run specials every now and then for free food. Their first class it out of this world! Wish I could travel it every time!

Everyone seems to hate SunCountry, but I've always had good experiences. I fly from Reagan (in DC) to Lansing, MI and back again, probably 4 times by now. Every time, I get a really good deal (like $150 round trip!), and the flight is quick, and smooth. The flight attendants are nice, and I always get checked in really quickly. My flights have never been delayed or canceled. My airline travel is always really nice, ever since I found SunCountry. I don't check any luggage, and while I don't appreciate having to pay to pick my seat early, it's not really a big deal. Service The check-in counter and the flight attendants are always very nice and helpful. In-Flight Accommodations My flight is usually only an hour or so and there is always drink service and (somewhat) cheap snacks.

Ticket and gate agents are rude and condescending. Is it because they think anyone who's flying Sun Country is both poor and ignorant? Ground services staff routinely lie to passengers, including about whether their carry-on bag will fit into the bin on the plane. It will cost you much more to fly than the face value of the ticket you buy, so it's not a "bargain" at all. Service Flight attendants couldn't possibly be more rude. Carrier routinely loses checked bags. In-Flight Accommodations Torn seats, torn carpeting. Seats uncomfortably small for average-size adult. Can't get a WHOLE CAN of Coke--they are too cheap to give out a whole one. We had some turbulence early in our flight so they just cancelled all hot drinks (coffee, tea) out of the beveridge service.

We flew Suncountry to sunny Mexico. I fly a lot and I was pleasently surprised at all the extras. A four hour flight gets really borring and I found a few unexpected interuptions to welcome us in and out of the country plus pointing out a few visible features below was really a nice touch.

I flew on a direct trip to St. Maarten island hoping that this would be different from trips that took 2-3 trips along with overnight flights. However, this was so much worst than any overnight flights and the long waiting time. When checking in, I was greeted by a **rude representative** who must've decided I carried something suspicious because she kept **walking and glaring** at me. Then at the terminal door, I was told that I would not be able that I was not able to have 3 items (Backpack, small suitcase that would fit on the overhead bin, and a small boxed cake). Apparently, they don't want us bringing food item since they want us to spend the money on their plane instead. After arrival at St. Maarten, I found out the black small suitcase I had to checked at the terminal door did not arrive with me and no one helped me with the lost and found. After coming back the next day, I was told that they **hoped **"it would arrive on the next Miami flight". Calling Sun Country customer service was useless as they did not allow for waiting time, and being overseas without a phone and calling roaming made it all the worst. Here I am without any of my beach clothing, jewelry, personal items and they have not provided any information. **I would suggest everyone to reconsider going on this airline, no matter the cost. The trouble it would cost you would not be worth your time and money.**

Hidden Fees every time you call!! Wanted to make sure young children were seated next to us and was told that i would have to pay an additional $64.  Absolutely Crazy!!! They went Bankrupt once and didn't learn their lesson then...Won't be surprised when they fail again!!!

I paid Hobbit Travel for 3 flights to Fort Meiers but they went out of business after collecting my money and not paying Sun Country.  Sun Country offered to honor the Hobbit rate for the fiights if I paid a second time so I did that.  Later I was charged $48.00 by Sun Country for SEAT ASSIGNMENT FEES and an additional $80.00 for 2 checked bags each way that would have been free under the Hobbit travel rates.  So much for truth in advertising and fair rates.  The Sun Country web site is difficult to work with and I was on hold 3 times for over 30 minutes on each call to reach a Sun County representative.  I WILL NEVER FLY SUN COUNTRY AGAIN!