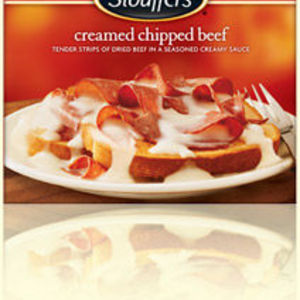 When I was a little kid, my mother bought creamed chip beef. It used to come in a clear see through bag that you'd put into boiling water. I never tried it then. Too bad. I really enjoy Creamed Chipped Beef. The creamy gravy was very flavorful. It was just thick enough. The beef was tasty too. I was actually quite surprised by how much was actually in the container. I initially expected there to be a much smaller ratio of beef to gravy. I ate mine over a piece of bread. I hear some people use potatoes. If you are going to use bread, you will need to eat it fairly quickly. The gravy is thick enough but the bread gets soaked through pretty quickly. Stouffer's Creamed Chipped Beef is a tasty quick meal. More for the adult crowd though. It is quick and easy and convenient. I thoroughly enjoyed it and would eat it again. I recommend it for adults.

since I am the only one in the house that likes it, it is useless to make a homemade batch. This tastes as good as the homemade I was given when growing up. Usually just have to add some pepper to it, but if following the instructions this is very good. Would highly recommend this product.

For almost 15 years of our long stay in our condo, Mom and I lived next door to a gregarious middle-aged couple, Russ and Germaine Alger, with whom we had such a close friendship that we used to joke that they were my adoptive parents. When we first met them back in 1978, Russ and Germaine were in their mid-50s; he worked as a Red Top shuttle bus driver; she was a Passenger Service Agent for the now-vanished Pan American World Airways. I was in my early teens then, and by some twist of fate - I don't really remember how or why - Russ and I became friends; for me, he was a warm-hearted, generous and genuinely funny father figure, and his wife was like a second mom. One of the most fascinating aspects of Russ Alger's life - to me, anyway - was the fact that during World War II he had been a U.S. Navy anti-aircraft gunner who had served in the Pacific. Not on the big carriers or sleek destroyers, mind you, but as a member of the Naval Armed Guard, which were the detachments of AA gunners assigned to serve aboard the less-glamorous tankers and cargo vessels which were so vital to the Navy's campaigns in the Pacific and elsewhere. I mention all of this because although Russ did not really talk much about the "exciting bits" of his war, he did tell me a bit about the daily life of a "swabbie" back in the 1940s, including some tidbits about what they ate. Now, if you or anyone in your family served in the military in those days, you might be familiar with some of the gastronomic fare which was eaten by our men and women in uniform and in overseas assignments. The best known food items which are still available today are SPAM, Hershey bars, Nescafe and M&M's, but Russ taught me about a simple dish nicknamed SOS, which stands for (in the cleaned up version) "stuff on a shingle." To make SOS, Russ told me, all you need to do is toast a couple of slices of bread (usually white bread), dab a bit of butter on it, then pour some creamed chipped beef on the toast. Nothing fancy-shmancy, but rather easy to prepare and to consume. Now, here in South Florida it is sometimes hard to find old standbys such as creamed chipped beef; in areas where "Anglos" (non-Spanish speaking whites) live it might be easily found, but in predominantly Latino neighborhoods, most grocery stores tend to be stocked with more ethnic foods that "elbow out" such products as chicken a la king (which is another food you can put on toast for a quick and easy meal) and creamed chipped beef. However, sometimes a person can get very lucky, as I certainly did when I came across a package of **Stouffer's Creamed Chip Beef **at my local Winn-Dixie. **What It Is: (From the Package Label)** *Tender strips of dried beef in a seasoned creamy sauce.* **What's In It?** *Ingredients: Milk, water, chipped beef chunked and formed (cured with salt, sodium eryphobate, sodium nitrate, BHT, TBHQ, citric acid), bleached wheat flour, 2% or less of modified cornstarch, seasoning (maltodextrin flavor, enzyme modified butterfat), extracts of turmeric and annatto coloring with wheat starch and soybean oil, spice.* *Contains milk and wheat ingredients.* **My Viewpoint**: Creamed chipped beef on toast, a.k.a. SOS or "Stuff on a Shingle," is still - apparently - a breakfast staple in the Navy and other branches of the armed forces, and it is also a dish that many non-military people seem to enjoy. **Stouffer's Creamed Chipped Beef **is very easy to prepare; you can either nuke it in the microwave (see instructions on the package to see which steps fit your microwave oven) or place the pouch for 18 minutes in boiling water. Cooking time varies from 7-9 minutes using the microwave oven to 18 minutes on the stove top. Either way, it takes less than 30 minutes to fix. I like this brand because its creamed beef tastes less salty than others I have eaten in the past. I'm not very fond of overly-salty foods, so I was worried that **Stouffer's Creamed Chipped Beef **would taste as though it had been boiled in seawater. Wrong. It's definitely spicy, yes, but not in a mouth-puckering, give-me-a-gallon-of-water fashion/ Though I only prepare **Stouffer's Creamed Chipped Beef **as part of the SOS dish, it probably makes good toppings for other foods, including pasta.