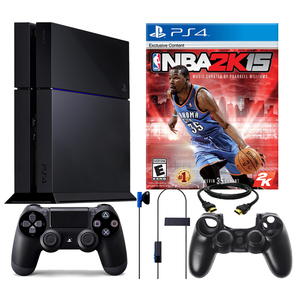 Give the perfect gift.

Great console which really shows how PlayStation has matured in time. While it's specifications are endlessly debated as in all console generations; they are first class and covered by other raters. What is notable is how well the PlayStation OS and online network has evolved from the PS3 days. Very well designed OS and GUI, with quick transitions and a high degree of social media and video/image sharing built in that really separates this from the competition. The game library is still a bit thin, as most early days for a generation are; but with the ease of development, the upcoming library is very exciting. Sort of has a PlayStation2-esque feel to it. Recommended for any console buyers. It's time to jump in.

something extra, I would not say it's worth or not worth it. no more no less. about the game, the gameplay changes quite, as the story advances. At first I remember in the first Call Of Duty, soap, mysteries, unknowns. And for lovers of this saga (excluding the Black ops that is a detour, which is for people who like living dead mingled with the war) many things are revealed. As it is technological advances. And it expresses what is human manipulation. Good Graphics, gameplay, more realistic than previous releases, and better physical, and lots of action as always, few errors, one that other defects as the settings, personally I say it lacks as more access to "advanced settings" but I have faith that it was settled with time. I highly recommend it. And It is a nice and excellent device, and I loved it but it's not me and I hope to Buy a one or give him one as a gift to me, but very cool device camera and his great and I think that Sony people she likes about the views of the device is very good and I liked it. And While the PlayStation4 has not changed in fundamental ways since its predecessor, there have definitely been some improvements under the hood, so to speak. The 8GB of RAM represents a 16-time increase in memory from the PS3. The PS4 also boasts faster USB outputs, a touchpad controller and an advanced camera. The PlayStation Store has also undergone some changes. All games can be purchased in either a traditional, physical format or via digital download. Game downloads have been reported to take as little as an hour to complete, and titles can even be played before they have finished installing. Some games that were recently released like Assassin's Creed IV: Black Flag and Call of Duty: Ghosts, can be upgraded to PS4-quality versions for a small, one-time fee. Being backwards compatible, however, the

Best Jhazgiddddddddddddddd Jaddeddddddddedda Thanks for developers Sony There is a new update to your presence very Dkra Alkmberh as text very good Bhraaoh Buy gta v and Cockle Of Diotio 11, 12, 3, 4, 5, 6, 8

Every boday shold get one