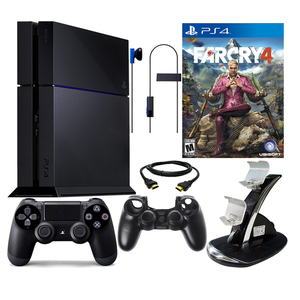 Give the perfect gift.

The PS4 is Sony's most attractively designed piece of hardware. It's a beautiful system, with a sharp, slightly angled profile accented by a light bar that acts as a console status indicator. On the back, PS4 has gone digital-only with HDMI/optical ports, and no analog audio or video outputs. We appreciate the internal power supply - it sounds like a small thing, but it's one less object to sit on the shelf next to or behind the PlayStation 4 but is the best ps for now so I really recommended but if you was not in hury you can waiting for the amended version.

the best thing in the world i lovet

something extra, I would not say it's worth or not worth it. no more no less. about the game, the gameplay changes quite, as the story advances. At first I remember in the first Call Of Duty, soap, mysteries, unknowns. And for lovers of this saga (excluding the Black ops that is a detour, which is for people who like living dead mingled with the war) many things are revealed. As it is technological advances. And it expresses what is human manipulation. Good Graphics, gameplay, more realistic than previous releases, and better physical, and lots of action as always, few errors, one that other defects as the settings, personally I say it lacks as more access to "advanced settings" but I have faith that it was settled with time. I highly recommend it. And It is a nice and excellent device, and I loved it but it's not me and I hope to Buy a one or give him one as a gift to me, but very cool device camera and his great and I think that Sony people she likes about the views of the device is very good and I liked it. And While the PlayStation4 has not changed in fundamental ways since its predecessor, there have definitely been some improvements under the hood, so to speak. The 8GB of RAM represents a 16-time increase in memory from the PS3. The PS4 also boasts faster USB outputs, a touchpad controller and an advanced camera. The PlayStation Store has also undergone some changes. All games can be purchased in either a traditional, physical format or via digital download. Game downloads have been reported to take as little as an hour to complete, and titles can even be played before they have finished installing. Some games that were recently released like Assassin's Creed IV: Black Flag and Call of Duty: Ghosts, can be upgraded to PS4-quality versions for a small, one-time fee. Being backwards compatible, however, the

i recommend it for you if you like far cry 4

This bundle comes with a Playstation 4 with 500GB of memory, a wireless controller, a mono headset, a charging cable, a power cord, am HDMI cable, and the Far Cry 4 video game. We bought this at the beginning of the year for around $500, but I feel that this was a great deal! Not only does it come with everything you need, but it also comes with an extra game. Quite honestly, I'm only really unsatisfied with the fact that it only comes with one controller, due to the fact that controllers are expensive. Aside from that, I feel that this bundle is great. I use the PS4 to game with friends, as well as play blu-rays. If you're going to buy a PS4, I would suggest buying some sort of bundle. They usually come with more bang for your buck. In the case of this bundle, I can confirm that this bundle is worth the hefty price tag it bears.